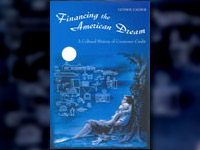 When Dr. Calder, a historian at Augustana College, began his research, he held two beliefs about the rise of consumer credit—beliefs held by most Christians. First, that prior to the early years of the 20th century, people lived within their means and rarely assumed debt, and second, that consumer credit undercut moral values, encouraging consumers to live hedonistic lives of instant gratification. Though he is skeptical of the consumer culture which has evolved, his research shows these two beliefs are largely myth.

“If my analysis means anything,” he says, “it means that modern consumers run the risk of being both deceived by consumerism and dragged along by consumer credit. To say there have been worse ways of living is not to say this is a good way to live.”

We recommend Financing the American Dream to you. Though scholarly, this is not a dry textbook, but the well told story of an essential aspect of our cultural history. We hope Dr. Calder will write a companion volume in which he spells out the implications of his research for the church. We not only need to shed a few myths, we need his help to see what faithfulness looks like in the midst of a consumer culture.