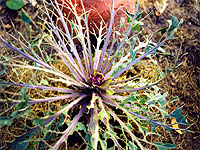 Faster
[This essay first appeared in the December 1999 issue of Notes From Toad Hall.]

December is a bad month for speed and stress. Nearly every Christmas letter we receive complains about how fast life moves. With each passing day the pressure of December mounts. Christmas looms before Halloween as the stores begin to stock holiday decorations and wrap. The newspaper supplements remind us of sales—tempting us to clip coupons (I hate coupons, and yet I feel obliged to at least look at them.) and rush out to purchase the best bargains. Charities implore us to help. We compile lists and lose them. We need Palm Pilots with alarms just to coordinate place, time, and food for Holiday Teas, Cookie Exchanges, and Open Houses. Christmas cards begin arriving the day after Thanksgiving reminding us that some people are on top of things while I still have unanswered mail dating to last December, and I am way, way behind with this issue of Notes.

There are always people around who seem to fly through life with Martha Stewart-ish ease. But not me. I’m not one of them, as Sember pointed out when she, and Denis, and I stood around the turkey the night before Thanksgiving. They held it while I stuffed it, using both hands to force large, sticky lumps into the cavity, dropping crumbs everywhere and, against professional advice, cramming them in tightly. “Mom,” she said, “Martha Stewart would have at least used a spoon.”

Then, strangely, the next day, a guest brought me a card which read: “Poor Martha Stewart. She’s trying to encourage gracious living and what happens? Her gardener sues her. Her brother libels her. And frankly, I’d love to slap the h. out of her myself.”

The acceleration of life is hardly the fault of Martha Stewart or December. Sadly, it is simply the cultural air we breath every day. This fall Denis and I read a book, FASTER: The Acceleration of Just About Everything by James Gleick. He has heightened our awareness of the speed of life and its unintended effects which appear everywhere.

Changing Lanes
As Denis and I drove from Massachusetts to Pittsburgh last month, we had an experience which represents all we’ve come to expect from the speed and efficiency of life. It was a long drive and we were running a little late in arriving at Bonnie Leifer’s home in time for dinner. Construction slowed us down, but between times we hurtled along as fast as the turnpike would allow. As we rocketed off the turnpike and up to the toll booths in the Pittsburgh area, we had a choice, which booth do we choose? We swerved past the booths with longer lines of cars and two with semis slowly pulling through. Counting ourselves lucky, we bolted into one with just one vehicle ahead of us. Quickly counting out the exact bills and change, I handed it to Denis. He rolled down the window, ready to hand out the ticket. We watched, ready to rush forward, but the red pick-up from Iowa wasn’t moving. The attendant was on the phone. Denis rolled the window up. The attendant was off the phone talking to the driver. The attendant was back on the phone. In the meantime two cars and a semi solidly blocked the lane behind us. The attendant came out and wrote down the pick-up’s license plate number. The attendant got back on the phone. A supervisor came over. He leaned out and handed something to the driver. The supervisor got on the phone. The driver handed something through the window. The attendant passed something back. Traffic screeched and roared on every side, vehicles were slamming to a stop, paying the toll and hitting the accelerator while we sat there. Sat there! Wasting Time! At last, Iowa pulled away and we drove through.

It took all of about ten minutes. But because we were running a little late, because of the speed of the cars around us, because whenever we choose a line we bet on our instincts to pick the fastest moving one (wherever we are: the bank, the checkout lane, etc), and because we have expectations of how long it should take to hit the end of a line and get out the other side, we found the tension and irritation unbearable. We said things like: “Let’s get out of this lane.” “Impossible” “This SHOULD only take five seconds.” “I can’t back up!” “What’s wrong with that guy?” Then we became utterly irrational: “He’s probably a felon.” “Can you push him out of the way with your bumper?” “Why do they even let Iowans DRIVE?” “Honey, get my gun.” Then we laughed. WHY ON EARTH should we get our knickers in such a twist over ten minutes at a toll booth? Because our insides, our heart, our thoughts take on the speed of life around us. Delays, human error, and inefficiency give us heart attacks. (Unless they are our own.) Some days I could almost die to be Amish and in the country. I would slowly drive my horse and buggy to the general store and back again and I would never leave the county.

Speed Cooking
This week I noticed another example in Bon Appetit. An ad showed a time exposure of blurred people rushing through life: a woman off to play tennis, a man with a briefcase running to work, a boy batting a ball, and a little girl doing a ballet step. The caption read:

If your life moves this fast maybe your oven should too. Introducing cooking at the speed of life with ADVANTIUM Oven from GE.

Obviously, there is nothing morally wrong with baking a chicken in 15 minutes rather than the hour it takes in a conventional oven. However, there are consequences – things we lose – when things speed up. Slower speeds give back time in an unexpected way. When I roast a chicken, the air in our house begins to slowly drift about with just a hint of oregano and thyme. Soon the atmosphere is laden with an intense aroma, it creeps into all parts of the house dislodging people from computers, couches, and play stations. Denis comes up from the office asking what am I trying to do? Kill him? Hunger grows as people must wait until the chicken is done to a crisp golden brown. We have time to anticipate. Then eat. We eat with more delight and thankfulness because what we desired was delayed. It’s a human thing. God made us that way.

Slow Gardening
Gardening is still one of the delightfully slow things in my life. There is nothing I can do to hurry one season to the next. I can provide the nutrients a plant needs. I can try to protect it from predators and weather, but I can’t make it flower or fruit faster than sun, rain, and God allows. I wait. I watch the slow unfolding of a delphinium so perfect I am sure it has to be creation’s prototype. I marvel at the creep of scarlet runner beans as they curl round their strings on their way to the top of the porch. Why do they always wind clockwise? The slow process of gardening restores sanity and hope.

The fall has been long and warm here in Minnesota. Putting my garden to bed for the winter has been prolonged and strange—like trying to convince a teenager he needs to go to sleep now at a reasonable hour. This is very weird as by now we should have snow covered ground and below freezing temperatures all day and night. On November 21 we arrived home from a trip to find my potted Sweet William still in bloom. Beside the back steps was Stella D’oro, a small daylily bravely blooming her golden yellow head off. The purple kale which last month had been eaten by slugs or worms right down to its lacy ribs and veins had recovered and was lush with new fleshy leaves. Its destruction so impressed Denis he took pictures to document its recovery.

Failures like this are described by Theresa Earle. She writes:
You must not, any of you, be surprised if you have moments in your gardening of such profound depression and disappointment that you will almost wish that you’d been content to leave everything alone and had no garden at all.(In your mind, you must hear her in a crisp British accent.)

I’m tempted. But these days I mostly get disappointed, not desperate. Garden disasters are fleeting and I’ve learned to laugh about them and wait for another day. Or a kinder season. Or wiser choices. Nothing seems to quench my hope. Garden failures are a lot like the afflictions Paul describes:

Therefore we do not lose heart. Though outwardly we are wasting away, yet inwardly we are being renewed day by day. For our light and momentary troubles are achieving for us an eternal glory that far outweighs them all. (2 Cor 4:16 17)

I suppose all this ties together in an odd way—the speed of life and weathering affliction. Although I am convinced most of us travel too fast for our own good, and need to join me in a little ranting about it, I have reason to notice it more because I have less choice about my speed. It is slow and slower.

After struggling for months, I learned why I had lost my hyper-drive. Earlier this year I was diagnosed with fibromyalgia. I hesitate to mention it, but it has been changing my life. I have always been energetic, and I was raised with that Lake Wobegon mentality: You don’t feel well? Tough. There are plenty worse off than you and the cows still need to be milked. Fibromyalgia isn’t life threatening. It involves some discomfort, and regrettably, it saps my energy. That’s been hard to face, and I’ve stumbled around griping about it. I’ve fallen asleep at the dinner table, at the movies, Bible studies, and discussions. (But, of course, cannot sleep at night.) Wall paper is peeling, (some of it helped along by our granddaughter, Manessah, who began a redecorating project one day after a nap), some rooms need painting and in alarm, my daughter even mentioned the dust. It has been disappointing not to accomplish all I’ve wanted, or to grow weary long before I should. I’ve tried not to let this interfere with our relationships with all the people we know and love, but I’m still shifting about trying to learn how to do the really needful and find eternal glory in this “light and momentary trouble.”

Denis has been good about it. I was afraid of his being disappointed that our dream of having far more people into our home for Toad Hall Sabbaticals might need to be curtailed. But he is simply putting his fer-tile mind to work on other things, rightly concluding that God has other plans for us, plans we haven’t yet envisioned.