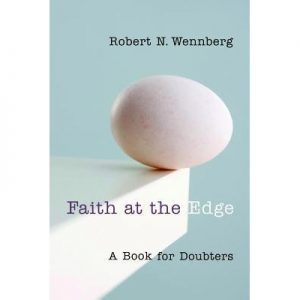 When God Seems Far Away:

There have been times when I have sensed God’s presence and grace in a way that seems to me to be both real and compelling. Once I was with Margie at an isolated cabin on the shore of Lake Superior. Once I was at the Guggenheim Museum of Art in New York at an installation of the work of Richard Prince. Both experiences are indelibly burned into my memory. Both were a surprise, both were intensely personal, neither lasted very long, and both ended very long stretches of time during which God seemed entirely absent.

These periods of absence have long been called “dark nights of the soul,” a term credited to the Christian mystic, St. John of the Cross (1542-1591). It’s not that I stopped believing, because I didn’t. It’s just that God seemed absent.

Robert Wennberg has walked through such dark nights and has published a short book to shed some light on the experience. In Faith at the Edge, he addresses not skeptics and seekers, but doubters. “Doubters are believers struggling with their faith within the Christian tradition,” he says. “Skeptics and seekers are both outside that tradition. Skeptics are critical and hostile. Seekers are questioning and open. Doubters occupy an altogether different place, uncertain about a faith to which they are no strangers and to which they have been committed, but who are now wondering whether it is true.”

The seventeen chapters are brief, clearly written, and accessible, with a few questions appended to each to prompt reflection and help process the content. Instead of titles, each chapter is headed by a series of questions that reveal not just what to expect but that we are reading the words of someone who has not just thought about God’s absence but wrestled with it.

Why Doubt Should Be Expected; Why Doubt Speaks Well of You; Why the Nonreligious Also Doubt.

Why Unanswered Prayer Can be a Problem; Why We Should Love God More Than We Love What God can do for Us; Why We Shouldn’t Sell Prayer Short.

Why Christians Aren’t Always as Good as Non-Christians; Why God Still Gets the Credit; Why Christians Should Applaud Goodness Wherever They Find It.

Why God Doesn’t Make His Presence More Obvious; Why We Need to Come to Terms with This.

Not every Christian knows firsthand this sort of doubt, the sense of God’s absence as part of their spiritual experience. For others of us it is common, perhaps even encompassing the vast majority of our life of faith.

Regardless of whether you have lived in the dark night of the soul or only heard of it, Faith at the Edge is a rich meditation on the reality that the God who promises to never leave can often seem, for many of us, frustratingly far away for frustratingly long periods of time.