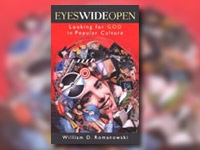 I was speaking at a conference at Covenant Seminary recently when a participant raised a question that I am asked regularly: What books could I recommend that teach the reader how to be discerning? That demonstrate discernment as well as talk about it, and that do so by addressing the stuff of ordinary life? Unfortunately, the list of such books is very short. But there is one that fits that description and I recommend it highly: Bill Romanowski’s Eyes Wide Open. This book grows out of a biblical understanding of life and culture, and is written with a deep passion for Christian faithfulness in a pluralistic and post-Christian world. And it is written, thankfully, by a man who writes well, who has done his homework, and who walks along with us to help us engage pop culture through the spectacles of Scripture instead of just telling us what to do.

Christian involvement in popular culture is hampered by two powerful, popular, yet badly mistaken perspectives. The first is that Christian faithfulness is best defined as entering a “culture war,” in which pop culture is the leading wedge of a deadly assault against the things of God. As a result many believers measure pop art solely in moral terms and urge withdrawal. Protesting the godlessness of Hollywood, these believers construct a ghetto, and imagine they are following Jesus. Others can’t stomach that, and since they enjoy pop culture, they consume it as a form of entertainment. In reacting against those who withdraw, they accommodate to the prevailing culture, and hope that their involvement will cause their non-Christian friends to think kindly of the faith. Dr. Romanowski addresses the error of both withdrawing and accommodating, and calls the people of God to a faithfulness modeled on the example of Jesus. “To be distinctive in our engagement with popular art,” he writes, “we need a different kind of Christian approach—an engaged, critical, and productive involvement with the popular arts—grounded in a faith vision that encompasses all of life and culture.”

The second mistaken perspective plaguing the Christian community vis-à-vis popular art is the argument that Christians must champion “Great” or “High” art—compared to “low” pop art which is then dismissed as “entertainment.” It is a weary argument, and though it can be made to sound compelling, in the end it is simply the continuation of an old debate which is humanistic in many of its primary assumptions. “It should be obvious,” Romanowski writes, “that highbrow-lowbrow distinctions have as much, if not perhaps more, to do with class than the actual art in question.” It is a debate unworthy of the Christian mind. Movies contain the stories of a postmodern generation, and the best ones are fine works of cinematic art. Much pop music is shallow and sentimental, but for those who have ears to hear, there is also much thoughtful poetry set to music which both fits the lyrics and nurtures the soul. The creativity of the people of God is richly graced and wild with possibility, and must not be imagined as limited to the achievements of the Western classical tradition.

Eyes Wide Open covers the basics, and does so in an appealing, accessible way. William Romanowski is a professor of communication arts at Calvin College, but does not write like a professor. Or, better yet, writes like the professor we all wish we had in college. He is concerned for both Christian witness and personal holiness, and helps us engage popular culture from a Kingdom perspective under Christ’s Lord-ship. And he does so not just in theory but with a practical approach that allows us to learn skill in discernment. He walks us through numerous films and songs, allowing us to listen in as he thinks about them Christianly. He surveys the cultural landscapes of both Hollywood and the Christian community, and addresses many of the most common questions which arise when evangelicals talk about pop art and culture. And though you may not agree with every conclusion Romanowski draws as he talks about specific works of pop art, you will find even the disagreement helpful. The reason is that he invites us to enter a conversation rather than pontificates like an expert having the final word on the topic. And he equips us with the correct questions to ask so that we can think and live clearly, deeply, and most important, Christianly.

Two more things about Eyes Wide Open. First, the book includes a superb set of questions designed to help us engage popular art. Used thoughtfully, these questions are a thoughtful tool to help us grow in cultural discernment. And second, if you log onto the publisher’s website (Brazos Press), you can download a free study guide for the book. Each chapter is summarized, the key points identified, and questions for discussion and reflection on that chapter are listed.

Please read and use Eyes Wide Open. It will help you develop skill in discernment. It is a Christian guide into the world of pop art and culture. It models what it means to have a mind and imagination shaped by the contours of the biblical world view. Use it in small groups and give copies as gifts. And if you have young people in your life, make it a priority to go through it with them. Take time to watch some of the films Romanowski addresses and listen to some of the music he mentions.

If some measure of shalom is, by God’s grace, to come to our broken and postmodern world, the people of God must break out of our captivity to fear and begin living as if we truly believed that Jesus is risen from the dead. By God’s grace, may it be so. Eyes Wide Open can help in that renewal.

If you want more information on this book, the Baker Book House website offers an excerpt and a study guide that’s worth checking out.