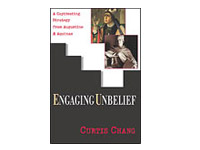 The first introduction many Christians were given to postmodernism came not by reading some postmodern thinker, but in a vague sense of unease. Somehow it felt as if the ground beneath our feet was shifting. It’s one thing to know that fewer neighbors share our deepest convictions and values, but it’s unsettling to discover that they are attracted not to Christianity, but to alternative religions and world views. Most unsettling of all, however, is the discovery that our cherished arguments seem increasingly to fall on deaf ears. Neighbors who support abortion are unmoved by the evidence we present that the fetus is an unborn child. Many even agree, but insist abortion might still be the best course for a woman. Reasons to believe in Christ which had seemed compelling not too long ago now appear unconvincing. A few decades ago, for example, the historical evidence for Christ’s resurrection often moved unbelievers to a point of decision, whereas the same evidence today usually draws little more than a shrug of the shoulders. “I’m really glad that being a Christian works for you,” our friend might say. “I’m a Druid.”

So, as usually happens when people feel their message isn’t being heard, we’ve tended to either withdraw into our own world, or to become more shrill.

Curtis Chang, an InterVarsity worker ministering at Tufts, MIT and Harvard, believes the best way to understand what is happening is to realize that we are facing an “epochal challenge.” One epoch in history (modernity) is giving way to another (postmodernity). The church feels threatened, and believers “feel that the ground they have taken for granted is shifting.” Chang also believes that this is not the first time in history when the church has faced such a situation. “Like us,” he says, “Augustine and Aquinas faced questions such as what to proclaim to a society that previously understood itself to be ‘Christian’ but now seems to be fragmenting, and what to say when truths previously held to be universal are under assault from a disorienting religious pluralism.”

Augustine (354-430) ministered as bishop in North Africa at a time when the fabric of society was unraveling. In the previous centuries Christianity had moved from being a small band of disciples in Jerusalem, to being a persecuted yet growing religion, to finally becoming the religion of the empire. The known world had been made Christian, and though pagan unbelievers existed, they were simply a mission field waiting to be won. Even pagans said it was a “Christian era.” An “Eternal City” had been established, where peace and civilization would be maintained and where the true God was worshiped. Then Rome fell, and pagans argued that Christianity was to blame. Society began to fragment, and many found the pagan arguments to be compelling. The civilization which had been so grand was in danger of dying, and the Christian message no longer seemed to be very convincing.

Aquinas (1225-1274) faced a very different challenge in his day. After the collapse of the Roman empire, the church became the repository of literature and knowledge. Monks kept learning alive, copying old manuscripts and teaching a largely illiterate populace. Or as Chang describes the situation, “the church did not just dominate the society, it became the society, the only society.” Unbelievers were outside this society, unlearned and without knowledge, in need of both the gospel and of civilization. Then a rival civilization appeared, one with learning, art, and science. A civilization which was unimpressed by Christianity, and believed itself superior. Islam had surrounded the “Only City” of medieval Christianity, and demanded attention. And since the Christian message seemed to be unconvincing, voices once again became shrill, until fighting words gave way to actual fighting in the Crusades.

Chang is convinced that we have much to learn from these two Christian leaders who like us faced an epochal challenge. Both Augustine and Aquinas put pen to paper to respond to the challenge of their day, and Chang argues that both adopted the identical strategy. “My thesis,” Chang writes in Engaging Unbelief, “is that both City of God and Summa contra Gentiles, although very different works written by very different men in very different epochs, have a basically similar purpose and plan.” That plan or basic strategy he calls “taking every thought captive,” a term Chang borrows from 2 Corinthians 10:5.

“This rhetorical strategy,” Chang explains, “involves three main components: 1. entering the challenger’s story; 2. retelling the story; and 3. capturing that retold tale within the gospel metanarrative.” By entering, Chang means that both Augustine and Aquinas made contact with their opponents by first operating within their opponents’ world view. They began the discussion by accepting their authorities and finding points of agreement which they could endorse and appreciate. Retelling involved knowing their opponent’s position better than the opponents did themselves. This allowed Augustine and Aquinas to identify the “tragic flaw” in their opponents’ position. They revealed it not by comparing it to Scripture, an authority their opponents did not accept, but in terms of the alternative world view itself. Then, in a final move, they capture their opponents’ story with the story of the gospel. They did this by showing how the story of Scripture gave meaning to their opponents’ story, and how it solved the tragic flaw while not obliterating the truth the opposing world view contained.

I am not in a position to say whether Chang has correctly read City of God and Summa contra Gentiles. Nor did I necessarily find every detail of his argument equally compelling. Nevertheless, the three-fold strategy he unpacks in Engaging Unbelief resonates deeply within me for four reasons: First, I see it as the strategy which Paul used in Athens on Mars Hill. As such, it is a biblical model for Christians seeking to bear witness to their faith in an increasingly pagan culture. Second, it resonates with the instructions the prophet Jeremiah wrote to the Old Testament people of God in exile in Babylon, and helps make sense of what we read concerning the lives of Daniel and his friends as they sought to live faithfully in a pagan culture. Third, it parallels what I saw Francis Schaeffer do as he talked with non-Christians, a conversation which was always filled with questions, and give and take. It was never a debate, but always a compassionate attempt to see inside the other person’s world. And finally, Chang’s strategy outlines an approach which seems to make sense as I struggle to be a faithful witness to my postmodern friends and neighbors.

Even before I was finished reading Engaging Unbelief, I asked Margie to join me so we could discuss it together. In the heart of the book are two chapters in which Chang moves slowly through City of God and Summa contra Gentiles to show how Augustine and Aquinas followed the strategy of “taking every thought captive.” Scholars will read these chapters to see if they agree; the rest of us can read them as an illustration of what the strategy might look like.

A few things seem certain. We face an epochal challenge. The ground beneath our feet has shifted, the society we once imagined to be “Christian” is fragmenting, and rival world views and religions confidently assert that they, rather than Christianity, should be embraced. Some believers are lapsing into an uncomfortable silence, while others grow more shrill. And unless you happen to be comfortable with this state of affairs—I certainly am not—you will agree that we need to rethink what it means to faithfully bear witness to the gospel in our generation. Passionate and thoughtful, scholarly yet accessible, Engaging Unbelief was written to help the Christian community do precisely that.