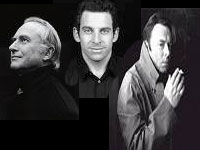 For those who would like a few resources to help think through the claims of the New Atheists, I will suggest three.

The first is Tim Keller’s The Reason for God. It was not written to respond to the books published by the New Atheists, rather it was written to make a case for Christian theism in a skeptical age. Still, that means it directly addresses the basic issues and challenges raised by authors such as Richard Dawkins, Sam Harris, and Christopher Hitchens.

But don’t just read it for the ideas and arguments that Keller develops. Read it also for the posture that Keller displays, the tone of his presentation, and the winsomeness of his approach. This is a man who cares about the gospel, not winning; who actually lives as if he really believes that hostile skeptics are made in God’s image.

The second book I’d recommend is There is a God. Back when C. S. Lewis hosted a weekly discussion group, the Socratic Club, at Oxford, a student named Anthony Flew attended regularly. He found Lewis’ arguments for theism unconvincing and after graduating became the philosopher who carefully advanced a rigorously scholarly case for atheism in numerous articles and books. In recent years, however, Flew has changed his mind and now believes in a Creator God. In There is a God Flew both gives the reason for his conversion to theism, and in the process refutes the central arguments of the New Atheists.

There is a God: How the World’s Most Notorious Atheist Changed his Mind by Anthony Flew with Roy Abraham Varghese (New York, NY: HarperCollins; 2007) 158 pp. + appendices + notes.

Alister McGrath, like Anthony Flew, was once a convinced atheist. Like Richard Dawkins, he studied science at Oxford. Then he became a Christian, went back to school, and became a theologian, specializing in the history of the Christian thought and the intersection of science and religion. In The Dawkins Delusion? he and his wife Joanna “challenge [Dawkins] at representative points and let readers draw their own conclusions about the overall reliability of his evidence and judgment.”

All right, one more suggestion—actually an anti-suggestion, of sorts. Skip the debates. The idea that Christian faith is demonstrated by rhetorically besting an opponent is simply false. It could be that at some time in the past such debates served a positive purpose. I have trouble believing they do so today. What we need are not debates but conversations.