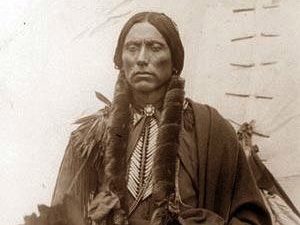 A deadly clash, an unfinished story
By the middle years of the 19th century white European immigrants had spread across the eastern half of what is today known as the continental United States. They had moved inland, westward, steadily, taking possession of what seemed in their eyes to be a vast wilderness that would be improved if owned and tamed by those who would cultivate and civilize it. The frontier at the western edge of this migration was inviting (for land could be had for the taking), but also dangerous (uncivilized tribes of natives existed who needed to be brought under control if law and order was to be preserved and extended).

In the north as whites settled Minnesota and Nebraska they came up against the traditional lands of the Sioux, which stretched from The Black Hills in the Dakotas through Wyoming to the Big Horn and Yellowstone Rivers in Montana. In the south as whites settled eastern Texas they came up against the traditional lands of the Comanche, which included part of Oklahoma, all the Texas panhandle into New Mexico and down to the border of Mexico. Both the Sioux and the Comanche were plains Indians. This meant they were expert horsemen, skilled nomads used to hunting game over the vast expanses of their land, and fierce fighters for whom courage in war was a coveted distinction in a warrior culture. By this time the whites had skipped past this frontier to occupy the west coast from Washington to California, so although their territory was massive, the Sioux and Comanche were essentially trapped, hemmed in by a population determined to settle a continent they believed was rightfully theirs. If there were a way to turn back from the abyss that followed, no leader on either side would find a way to institute it. Instead warfare, duplicity, kidnapping, torture, hunger, and forced resettlement were unleashed, the results of which continue to haunt us today, as a people (we are still divided) and as a nation (which still operates on the basis of self-interest, so that greed for resources will cause us to break solemnly ratified treaties).

In The Killing of Crazy Horse, Thomas Powers a Pulitzer winning journalist best known for his writing on the intelligence community tells the story of the Sioux. Crazy Horse was the final chief to agree to Washington’s demand that the Indians give up their horses, guns, land and settle in agencies where they would be supplied food by the government. By this time it was well known that the promise of food was tenuous at best. Rarely was there enough and whenever officials in Washington wanted further concessions or a new treaty from the tribes the supplies would cease altogether. By the time Crazy Horse gave himself up the tension on both sides was at a breaking point. As soldiers and Fast Thunder, Crazy Horse’s cousin escorted him to the guardhouse at Camp Robinson, a scuffle broke out in the crowd surrounding them and Crazy Horse was stabbed. He died later that night.

In Empire of the Summer Moon, S. C. Gwynne, a journalist with The Dallas Morning News tells the story of the Comanche. Quanah Parker was the son of Cynthia Ann Parker, a woman who had been kidnapped by the Comanche during a raid of the family’s home in Texas that lay in land long claimed by the Comanche. Rescue attempts failed, and her son, Quanah rose to become a respected and powerful warrior chief among her adopted people. The warfare between whites and the Comanche stretched on for four bloody decades, Quanah outliving the conflict to become a successful businessman and popular personality, living in Star House, a massive ten-room ranch-house he built on an extensive piece of land he came to own in Oklahoma.

Both Killing and Empire are worth reading. Both tell a story within a wider story, the lives of Crazy Horse and Quanah Parker becoming the excuse to write a history of the Sioux and the Comanche within the historical and cultural context of their times. Unlike what I was told in school, all the tribes are not essentially indistinguishable, and learning about both tribes was a fascinating trip into the past. Gwynne’s writing (in Empire) tilts a bit towards the exclamatory while Power’s (in Killing) maintains the quiet voice of a careful historian, but both are easily accessible, well researched, and essentially read like good novels.

One of the things mandated by Christian faith is a refusal to accept uncritical or indulgent histories that hide aspects of the story we find embarrassing. The Bible tells the stories of heroes, but is unflinching in allowing us to see their clay-footedness. We honor David, second king of Israel as man after God’s own heart without forgetting he was an adulterer and murderer. We accept Peter’s writing as inspired and holding apostolic authority without ignoring the fact he denied Christ not just once but three times. We know the world is fallen, and so assume that the record of history will reflect something of both the glory and the brokenness of humankind. So it is here. The Sioux, the Comanche, the whites moving into their lands, and the officials in Washington overseeing the process all share responsibility for what transpired, and no party comes away from the encounter without guilt on their hands. And on both sides there were individuals who tried to rise above the fray and speak a word of reconciliation but their voices did not carry the day.

It is also true—and important to say clearly—that the treatment of both the Sioux and the Comanche by our government is a sad and regrettable episode in our nation’s history. Washington broke treaties that they had written and insisted upon when Washington decided they wanted more from the Indians, and callously withheld food until the chiefs acquiesced. Stripped of their dignity, way of life, and livelihood, both tribes endured slaughter and finally were herded onto land the whites found undesirable, land that could never sustain them, forcibly making them permanent wards of the government. The irony is that Washington claimed to be the civilized side, civilized by Christian faith. But they did not heed the word of the prophets. “Woe to him who heaps up what is not his own… Because you have plundered many nations, all the remnant of the peoples shall plunder you” (Habakkuk 2:6, 8). “Happier were the victims of the sword than the victims of hunger, who wasted away, pierced by lack of the fruits of the field” (Lamentations 4:9).

I am deeply grateful for having read both The Killing of Crazy Horse and Empire of the Summer Moon. They provided stories that absorbed me for many happy hours with prose so good I occasionally read sections aloud to whoever was in earshot. They introduced me to people who lived remarkable lives in regions that are characterized by both great beauty and extreme weather. They informed me of a people who no longer exist, at least in the way they did in the 19th century, and whose culture and skills were finely tuned to living in regions so vast and demanding they swallowed up many wandering souls without a trace. They remind me of how important it is to listen, especially when someone believes and lives very differently than I do, remembering that for all their differentness they are fellow creatures of God, made in his image. And they help provide a bit of historical and cultural context to stories still in the news, as events that transpired so long ago continue to make ripples we feel today. And that helps shape both my prayer life and my understanding of what Christian faithfulness looks like in 21st century America.

Empire of the Summer Moon: Quanah Parker and the Rise and Fall of the Comanches, the Most Powerful Indian Tribe in American History by S. C. Gwynne (New York, NY: Scribner; 2010) 319 pp. + notes + bibliography + index.