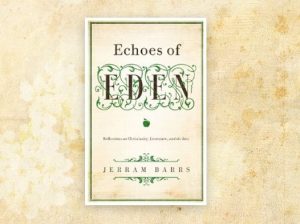 Echoes of Eden
A few days ago when the staff of Ransom met for prayer, the liturgy in Common Prayer included a line that caught my attention. “Come now and join the feast,” we read aloud, “right here in the belly of the beast.” My imagination drifted to images of exiles in a dark land, their path wandering through desolate wastes, always on the alert for danger or attack. What if they paused along the way to celebrate the sovereignty, majesty, and goodness of their king—the rightful king—with a feast, complete with dancing, music and lovely tales related by storytellers who repeat the ancient stories with conviction? It’s hard to imagine a more subversive act.

This is essentially what Jerram Barrs calls the people of God to in Echoes of Eden. He wants us to be fully aware of the brokenness of the world, while never failing to fully enjoy the hints of the glory of God found in the works of imagination, art and culture made by women and men who bear the image of God. He wants us to know that to be dismissive of literature and art is to be dismissive of grace.

In the first half of Echoes, Barrs provides a careful biblical framework for understanding the significance of art and culture, and for embracing it with Christian faithfulness. In the second he devotes chapters to authors he has read, relished and lectured on: C. S. Lewis, J. R. R. Tolkien, J. K. Rowling, William Shakespeare, and Jane Austin. His careful explanation of how human culture—specifically literature and the arts—fits into a Christian worldview is much needed at a time when the church is widely viewed as anti-culture. The chapter in which he identifies eleven categories by which to judge a work of art is a wise corrective to the defensiveness that keeps many believers from embracing beauty in a fallen world.

“Thinking scripturally about the arts,” Barrs says in the opening line of the book, “is an area where there appears to be great confusion in our churches.” He is correct. I hope Echoes of Eden is read and discussed widely. The truth of its message can help nurture a Christian imagination, restore the arts to their proper place in the church, and help us frame the unchanging gospel in a way that will cause a postmodern world to consider its claims.