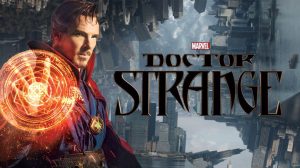 When battles are within and without
Stephen Strange (played by Benedict Cumberbatch) is a brilliant neurosurgeon with a worldwide reputation and an ego that is slightly larger. Life is simple for Strange: science has explained reality and people need to stay out of the way while he performs medical miracles. A car accident, however, crushes his hands and when traditional therapy to restore the use of his fingers is too slow he looks beyond modern medicine for help. He tracks down a man who was paralyzed but now walks, who tells Strange the answer he is looking for can be found at Kamar-Taj in Nepal. It is a monastery, where Strange meets The Ancient One (played by Tilda Swinton) who demonstrates to him that behind science is a hidden world of magic, that reality is not as simple as natural science asserts, and that his body will not heal when his soul is in disrepair.

Dr. Strange is a comic book character, a hero whose story originated in Marvel Comics in 1963. In one sense the plot is simple: a man of science from the West travels to the East to learn ancient mystic arts and saves the world. From that perspective, comic book series like Dr. Strange are easy to dismiss as lowbrow entertainment, but there is more going on. After all, where else can you find rollicking melodrama infused with philosophical questions about the ultimate nature of reality? Where do you find young people reading stories in which naturalism is depicted as an inadequate answer to life’s deepest questions? And I would say as a Christian that we of the West do need to travel to the East for answers, though I am convinced that the word spoken by Hebrew prophets and poets contains answers that in the end are more fully credible. And The Ancient One is correct to insist that reality is not limited to the here and now, but that principalities and powers beyond imagining exist just out of sight, if we have eyes to see.

In an interview in Relevant, director Scott Derrickson said the movie was “one man’s journey from being this soulless, but self-satisfied, ego-maniacal, high-level New York neurosurgeon to being brought down to the deepest valley and losing everything. Losing his identity, his sense of self, his personal relationships, and then having to go on a journey that takes him up and out of himself and into something much, much greater and much, much bigger than he ever knew he could be.” Dr. Strange has to battle cosmic evil forces as the film comes to its climax, but it was not this external battle that drew Derrickson to the story.

There have been a lot of good boxing movies in the history of cinema and there’s always the top contender that your hero’s got to fight at the end, but no good boxing movie is about that conflict. It’s really always about an individual finding out who they are, what they’re capable of, are they strong enough to build themselves up to be able to accomplish something like that. I think in this case it’s great because it’s not about physical achievement, it’s not about a character manifesting himself in physical strength, it really is about getting past one’s ego and coming to recognize that true growth and true power come from a sense of surrender to something greater than yourself and service to something greater than yourself.

It is this inner transformation, the battle past ego into sacrificial love that is at the heart of the story of Dr. Strange.

Derrickson (The Exorcism of Emily Rose, 2005) has produced a film of mind-bending special effects while telling a compelling story with moments of wit and insight. And he has made a film with appeal. With a budget of $165 million, Dr. Strange made half that back the opening weekend and within five months the film had grossed $233 million. This is a blockbuster that speaks to some of the deepest questions of young adults today, an enjoyable film in which multiple issues are raised in the plot and dialogue that are worth discussing.

1. What was your initial or immediate reaction to the film? Why do you think you reacted that way? Do you tend to enjoy fantasy as a cinematic genre? Why or why not? In what ways can fantasy do a better job than realism in revealing the deeper, spiritual aspects of reality? 2. In what ways were the techniques of film-making (casting, direction, lighting, script, music, sets, action, cinematography, editing, etc.) used to get the film’s message(s) across, or to make the message plausible or compelling? In what ways were they ineffective or misused? 3. What was made attractive? How is it made attractive? 4. With whom did you identify in the film? Why? With whom were we meant to identify? How do you know? Discuss each main character in the film and their significance to the story. 5. How do you see reality? Why? How satisfying is it? 6. If you are a Christian, what texts of scripture speak about the nature of reality? Which texts offer insight into the realm of existence that lies beyond what our eyes can see or that science can discover and study? Many of us as Christians are more comfortable with a somewhat secularized, scientific view of reality than one that involves teeming hosts of principalities and powers, demons and angels, and reality altering prayer, chant and worship. At least that’s how we ordinarily tend to view things. Are you comfortable with how you are acting on your conviction that these texts are God’s word of life? 7. In the context of such an exciting world of fantasy evoked by Dr. Strange, how is possible to speak of the Christian gospel in a way that provokes interest?