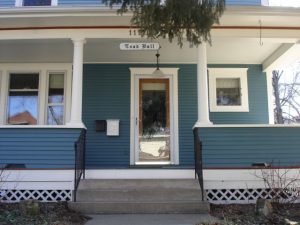 Last night Margie read from and signed copies of her book, The Exact Place. Anita had filled Toad Hall with candles and flowers, arranged chairs so everyone could hear easily, made individual Angel Pies for each person (the recipe is in Margie’s book), and set up a place at the dining room table for the signing. It was lovely, and a lovely evening. People drove in from Iowa and the Twin Cities, and one couple, dear friends, flew in from Connecticut to be here.

I didn’t know Margie was a writer when I married her. If I had known, I would have still married her, but still, I had no idea. Neither did she. I knew she was creative and intelligent, but the writing came later. It turns out to be one of her gifts, an essential part of her calling, but it was hidden or unnoticed back in the Sixties when we dated.

Some people seem to know from the beginning what they want to do in life. I’ve met people from a remarkable array of vocations who tell that story. They seem to be rather decisive, aware of their gifts and interests and what work is most fulfilling to them, and they go for it. Not a bad way to go through life, I suppose, but not a standard for everyone, either. Still, in a society like ours where extroversion is the cultural ideal the prejudice that everyone should be like this seeps into the church as well. It’s worth resisting.

Some people walk through life and discover their calling and gifts as their pilgrimage unfolds. The point is not how fast you uncover such things but whether you are faithful to what you know, to what has been revealed so far. The danger is not missing your calling, but being disobedient, or disdaining your gifts because you’d prefer something else. It’s a good formula for becoming increasingly bitter about life.

Tom Nelson in Work Matters says that he has found “four diagnostic questions very helpful for vocational direction at any stage of life. We need to ask ourselves: (1) How has God designed me? (2) What life experiences have shaped me? (3) What circumstances surround me? And (4) What do my wise counselors say?”

Even those who were aware of their calling from childhood should reflect on these questions. And they are certainly helpful for the majority of us for whom knowing our calling is a slow path of discovery over many years. I suppose the quick-responders would argue they have an advantage because they haven’t wasted time. I’d say the slow path is lovely because the process of discovery is rich with surprise.

Watching Margie discover her calling as a writer has been fascinating, because at times I think I’ve been more certain of her giftedness than she has. More than once over the years I’ve been away speaking at some conference. My host introduces me, kindly and thoughtfully, not by reading something I have written, but something that Margie has written. “Please welcome her husband,” they conclude, and the microphone is mine.

None of us are very objective about ourselves. We are both finite, and so see ourselves incompletely, and we are fallen, which means we also see ourselves wrongly, at least to some extent. It’s been good to walk together with Margie in this process, because when gifts are uncovered we can have the tendency to disbelieve it. Why didn’t we see them before? What else am I missing? What if I try and fail? It’s nice when friends have more confidence in us than we have in ourselves.

In the September 27, 2012 issue of Rolling Stone, there was an extensive interview with Bob Dylan. Mikal Gilmore says to Dylan, “You’ve described what you do not as a career but as a calling.” Dylan’s response is both wise, and sad. “Everybody has a calling, don’t they? Some have a high calling, some have a low calling. Everybody is called but few are chosen. There is a lot of distraction for people, so you might not ever find the real you. A lot of people don’t.”