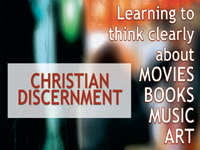 If anything is certain for Christians today, it’s that we find ourselves living among people who do not share our deepest convictions and values. If we are to be faithful as Christians in such a pluralistic setting, we need to develop skill in discernment. An ability to respond winsomely to those who see things very differently than we do, instead of merely reacting to the ideas, values, and behavior of the non-Christians around us. An ability, by God’s grace, to creatively chart a godly path through the maze of choices and options that confront us, even when we’re faced with situations and issues that aren’t specifically mentioned in the Scriptures.

This was what Paul wanted for the Christians who lived in the pluralistic culture of the first century. “We have not stopped praying for you,” he wrote to the Colossians, “asking God to fill you with the knowledge of his will through all spiritual wisdom” (1:9). J. B. Phillips translates it this way: “We are asking God that you may see things, as it were, from his point of view by being given spiritual insight and understanding.” Os Guinness uses the term thinking Christianly, and defines it as “thinking about anything at all in a distinctly Christian way. Where our minds are so informed by the truth of God’s word in terms of our assumptions and presuppositions that we increasingly see as God sees, though it will be in an imperfect way.”

One way to develop skill in discernment is to recognize that being discerning is a process that involves answering simple but probing questions. The questions are simple enough to be taught to children; they are probing enough to help us get to the heart of whatever we are trying to reflect on as Christians. The questions can be learned and used, until with practice they become a habit, a way of biblically interacting with ideas and issues in a fallen world.

The process outlined here is not a formula or recipe, nor is discernment some sort of technique. Nor are we guaranteed that answering the questions will somehow make everything turn out well. Rather, as discerning Christians we may, by God’s grace, be remembered as those who sought to be faithful.

1. What’s being said? What is the nature of the challenge confronting us? What ideas are presented, or are implicit as assumptions? What’s really at stake, or being requested, or argued for, or disputed?

2. What are the essential or foundational issues? What are the secondary or less important issues? It’s vital to distinguish between the two, so we don’t get distracted by things that may have significance, but are not of primary importance.

5. Where do we agree? Where do we disagree? Seek points of agreement before identifying areas of disagreement. Christians have the unfortunate reputation of being unnecessarily negative and disagreeable, unlike Paul, who in Athens began his discussion with a pagan audience by finding a point of contact with them.

6. Why do we believe the Christian position? What reasons would we give?

7. How can we talk about and live out the truth creatively and winsomely in a pluralistic culture? Since most of our friends and neighbors see things differently, how can we make sure we are being understood?

When we talk with non-Christian friends about issues that matter, the discernment questions can be changed slightly to become a framework for discussion. (Note: they are questions, not mini-sermons.)

1. What’s being said? What’s the message(s) or issue(s)?
What do you find attractive, appealing, plausible or compelling? Why? Where do you agree? Where do you disagree?
Why? Why do you believe that? What reasons would you give?

2. What difference does it make in your life? How does this conviction or value change how you live or affect your choices?

Because popular music are art forms, and not merely ideas, we can add a couple of questions to help us better comprehend what’s being said in each case.

1. What is the message of the lyrics? How good is the poetry?

2. What is the message communicated by the music? How good is the music? Does the music fit the words?

3. How is the performance?

We’re so enthusiastic about movie discussions that we’ve devoted an entire section of our website to the topic.

1. What was your initial or immediate reaction to the film? Why do you think you reacted that way? What was it in the film that prompted that reaction?

2. What is the message(s) of the film, or view of life and the world that is presented in the story as it unfolds?

3. Consider how the film addresses themes such as: the nature of reality or what is really real; what’s wrong with the world, and what’s the solution; the fragmentation of life in our busy, pluralistic world; the significance and meaning of relationships and love; the significance and meaning of being human; whether there is right and wrong, and how we determine it; the meaning of life and history; and what happens at death.

4. What is attractive here? To whom? How is it made attractive?

5. Where do you agree? Where do you disagree? Why? In the areas in which we might disagree, how can we talk about and demonstrate the truth in a winsome and creative way in our pluralistic culture?

6. In what ways were the techniques of film-making (casting, direction, script, music, sets, action, cinematography, lighting, editing, etc.) used to get the film’s message(s) across, or to make the message plausible or compelling? In what ways were in ineffective or misused?

7. Most stories actually are improvisations on a few basic motifs or story-lines common to literature. What other films come to mind as you reflect on this movie? What novels or short stories? What Scriptures?