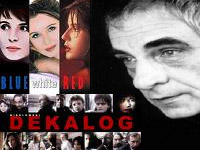 Sometimes if the film is good enough and its story told well, a character or image will lodge in the imagination like a splinter, making us wonder and think, pondering its meaning. It doesn’t happen often in film, unless the movie is crafted by an artist as creative as the late Polish director, Krzysztof Kieslowski. In his films even minor characters or images glimpsed briefly in the background can take on significance.

In his ten-part series of films produced for Polish television, The Decalogue, for example, there is an enigmatic fellow who doesn’t seem to be part of any of the actual stories, but who nevertheless shows up in eight of the films. Sometimes he is sitting quietly, sometimes carrying some prop. Often he makes eye contact with the protagonist at a crucial juncture in the story. Who is he? Kieslowski never reveals his identity, and so leaves us to wonder. Is he a symbol for God, who sees all, even what is done in private? A symbol for conscience since the series, based on the Ten Commandments, explores ethical decisions made by people in the flow of ordinary life? Or since Kieslowski emphasizes that we live out our lives in community, is the man a symbol for the eyes of a watching world? “I don’t know who he is,” Kieslowski said in an interview, “just a guy who comes and watches us, our lives. He’s not very pleased with us.”

The films of The Decalogue are not expositions of the Commandments, but stories which make sense only in reference to them. In these films Kieslowski and his coauthor, Krzysztof Piesiewicz “placed abstract absolutes into concrete, unpredictable, and yet realistic situations,” Agnieszka Tennant notes in Christianity Today. “They managed to transcribe the metaphysical into the tangible, without claiming that the end result is a complete picture. The well-developed metaphors and multilayered symbols penetrate to the core of a human soul.”

Born in Warsaw in 1941, Kieslowski studied at the Lodz Film Academy and for years worked mainly in television. Although much of his early work is difficult to find, The Double Life of Veronique (1991); the Three Colors trilogy: Blue (1993), White (1994), and Red (1994); and The Decalogue (1988) are readily available. In 1994 Kieslowski announced his retirement from film, though acquaintances claimed that he was planning another trilogy: Hell, Purgatory, and Heaven. A moot issue, as it turns out, since he died in 1996 at the age of 54.

Though I have no evidence that Kieslowski was a believer, his films are shot through with Christian themes and challenge us to think more deeply about life and ethics. His movies are about “individuals who can’t quite find their bearings,” Kieslowski said, “who don’t quite know how to live, who don’t really know what’s right or wrong and are desperately looking.”

His films are crafted with care. The Three Colors trilogy, based on the three colors of the French flag and their symbolic values (blue, liberty; white, equality; red, fraternity) not only explore those themes but are suffused with those colors visually. Though each of the three can be viewed on its own, viewing them in order reveals subtle and surprising connections. Each tells a separate story with different characters, yet the films contain background scenes taken from the others, and in Red, all the protagonists are briefly together, though unknown to one another. Like the image of the tangle of electric wires stretched between houses and tenement buildings which appears on the screen, Kieslowski is reminding an individualistic world that relationship and community are not only essential, but inescapable.

Kieslowski’s films are often enigmatic and occasionally irritatingly obscure. Much is left hanging—sometimes too much—but then perhaps Kieslowski is reminding us that even ordinary life is far more mysterious than we imagine. Full of details that make us wonder, his films tell stories not to entertain but to challenge us to think again and to see in new ways.

1. What was your initial reaction to the film? Why do you think you reacted that way? 2. What is the message(s) of the film? Consider how the film addresses themes such as: the nature of reality or what is really real; what’s wrong with the world, and what’s the solution; the fragmentation of life in our busy, pluralistic world; the significance of relationships and love; the significance and meaning of being human; whether there is right and wrong, and how we determine it; the meaning of life and history; and what happens at death. 3. Where do you agree? Where do you disagree? Why? In the areas in which we might disagree, how can we talk about and demonstrate the truth in a winsome and creative way in our pluralistic culture? 4. In what ways were the techniques of film-making (casting, direction, script, music, sets, action, cinematography, editing, etc.) used to get the film’s message(s) across, or to make the message plausible or compelling? What details or background images seem to have significance? 5. Most stories actually are improvisations on a few basic motifs or story-lines common to literature. What other films come to mind as you reflect on this movie? What novels or short stories? What Scriptures? 6. With whom did you identify in the film? Why? With whom were we meant to identify? Discuss each main character in the film and their significance to the story. 7. What insight does the film give into the way people see life, meaning, and reality? How can you use the film as a useful window of insight for Christians to better understand our non-Christian friends? Might the film be a useful point of contact for discussion with non-Christians?