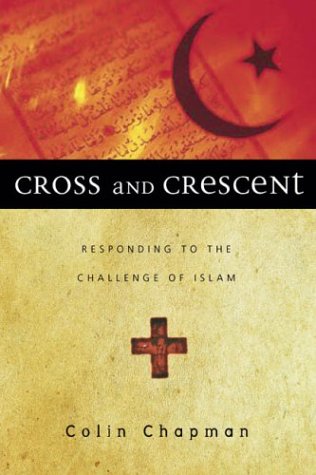 Islam: Christians seeking understanding
If you haven’t done much reading on Islam it might be time to begin given its importance as a religion on the world scene and its noticeable growth within the West in general and within the U.S. in particular. If you have done some reading, I encourage you to continue. Three books that I am glad to have in my library might be ones you should consider:
Cross and Crescent by Colin Chapman is the one book to read if you have time to read only one book. Chapman is an evangelical who teaches Islamic studies at the Near East School of Theology in Beirut after living and working for over a decade in Egypt and Lebanon. He is a thoughtful, knowledgeable scholar yet accessible to the lay Christian. He explains how to build meaningful relationships with Muslims, gives a careful overview of Islam’s history, beliefs and practices, explores important areas of similarity and difference between Islam and Christianity, and discusses how the Christian might effectively speak and live in ways that commends the gospel to Muslim neighbors. Basic, clearly organized, accurate, and deeply committed to the gospel of Christ, Cross and Crescent (2nd edition) should be in every Christian’s library.

Islam: A Short Guide is a collection of 15 succinct essays of interest to American Christians wanting to gain an understanding of Islam by scholars whose expertise allows them to summarize without too much oversimplifying. The topics include: Islam; Qur’an; Muhammad; Hadith & Sunna; Shari’a; Islamic Philosophy; Sufism; Shi’ites, Shi’ism; Sunnis, Sunnism; Mosque; Islamic Government; Women & Islam; Islam & Judaism; Islam & Christianity; Islam in America. A helpful resource rather than a unified study, Islam: A Short Guide can serve to sharpen our comprehension of specific details—and in that light the glossary is worth the price of the book.

On October 13, 2007 an open letter, “A Common Word Between Us and You,” signed by 138 Muslim leaders was addressed to Christian leaders around the world. “In essence,” Ghazi bin Muhammad of Jordan says, “it proposed, based on verses from the Holy Qur’an and the Holy Bible, that Islam and Christianity share, at their core, the twin ‘golden’ commandments of the paramount importance of loving God and loving one’s neighbor.” On November 18, 2007 an open letter, “Loving God and Neighbor Together: A Christian Response to ‘A Common Word Between Us and You’” was published in the New York Times. “A Common Word” reproduces both letters and includes a series of essays and commentaries on them by leaders of both faiths. The exchange of letters is an event we should know about, the letters are worth careful reading and reflection, and the book gives readers a chance to listen in on a serious dialogue between Muslim and Christian scholars, political leaders, and theologians.