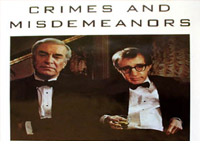 Cliff Stern (Woody Allen) is an idealist filmmaker… until he’s offered a lucrative job shooting a flattering profile of a pompous TV producer (Alan Alda). Judah Rosenthal (Martin Landau) is the pillar of his community… until he learns that his ex-mistress (Anjelica Houston) plans to expose his financial and extramarital misdeeds. As Cliff chooses between integrity and selling out, and Judah between the counsel of his Rabbi (Sam Waterston) and the murderous advice of his mobster brother (Jerry Orbach), each man must examine his own morality, and make an irrevocable decision—that will change everyone’s lives forever.

If someone asked you the question Lester was asked: “What is comedy?” what would you say? Lester offers up the less than meaningful response, “Tragedy plus time.” And we laugh. But still, the question sits there amid all our assumptions of what real comedy is, and I, for one, struggle to give a good answer.

This film falls under the category of comedy. It is driven by hapless humor and intense ironies, both of which seem to come by way of Allen’s uncanny ability to shrug off deeply hurtful situations with jokes, riddles and banter. The film is deeply sorrowful at times. Other moments almost make us embarrassed for the different characters.

The film itself is a riddle.

Quotes and Moments
Judah Rosenthal to Cliff:
He’s on the verge of a mental collapse. And inch away from confessing the whole thing to the police, and then one morning, he awakens…the sun is shining and his family is around him… and mysteriously the crisis is lifted. As the months pass, he finds he is not punished. He prospers. His life returns to normal… back to his protected life of wealth and privilege… In time it all fades.
Cliff Stern:
I’m gonna make my move there, I think. But I have this ethical dilemma, see, cause I’m married. My heart says one thing, my head says something else. It’s very hard to get your heart and head together in life… In my case they’re not even friendly.
Lester:
What makes New York such a funny place is that there’s so much tension and pain and misery and craziness here. And that’s the first part of comedy. But you’ve got to get some distance from it. The thing to remember about comedy is that if it bends its funny. If it breaks, it’s not funny… so you’ve got to get back from the pain… Comedy is tragedy plus time.
Rabbi Ben to Judah:
There’s a fundamental difference in the way we see the world. You see it as harsh and empty of values and pitiless, and I couldn’t go on living if I didn’t feel with all my heart a moral structure with real meaning and forgiveness… and some kind of higher power. Otherwise there’s no basis to know how to live. And I know you well enough to know there’s a spark of that notion inside of you somewhere too.
Professor Louis Levy:
It is a strange paradox. When we fall in love, we are seeking to refind all or some of the people to whom we were attached as children. On the other hand, we ask our beloved to correct all of the wrongs that these early parents or siblings inflicted on us. It contains in it the contradiction… and attempt to return to the past… and the attempt to undo the past. We need to remember that when we are born, we need a good deal of love to persuade us to stay in life.
We are the sum total of our choices. Events unfold so unpredictably, so unfairly… human happiness does not seem to have been included in the design of creation. It is only we, with our capacity to love that gives meaning to the indifferent universe. And yet, most human beings seem to have the ability to keep trying, and even to find joy from simple things like their family, their work and from the hope that future generations might understand more.

1. What was your initial reaction to this film as a work of art? What was artistic about it? 2. In what ways were the techniques of film-making (casting, lighting, direction, script, music, sets, action, cinematography, editing, etc.) used to get the film’s message across, or to make the message plausible or compelling? In what ways were the techniques ineffective or misused? 3. What images and motifs involving sight, light, darkness and blindness were woven throughout the film? How were they developed? Is this an effective technique? Why or why not? 4. Why does Allen include both stories in this film? What would happen if he had concentrated on only one? How do the two interact and intersect? 5. What makes this film a comedy? 6. What different vocations are portrayed in this film, and how are they used by Allen to tell his story? Are any of the different jobs held by the different people related (hitman, opthamologist, rabbi, documentary filmmaker, TV producer, professor)? If so, in what ways are they connected? 7. If Allen is asking one primary question in this film, what do you think it is? 8. Discuss each character in turn (Judah, Dolores, Cliff, Lester, Halley, Ben, Professor Levy). What is their significance to the story? How do you think the following characters saw themselves? How were they seen by others? 9. With whom do you identify in the film? Why? With whom are we meant to identify? How do you know? What are the crimes in this film and what are the misdemeanors? Does Allen play these against each other? If so, how? Do you sense that he sees a major rift in degree between crimes and misdemeanors, or does he treat the distance between them with ambivalence? 10. What is the resolution of Judah’s hired hit? What is the resolution of Cliff’s failed attempt at an affair? 11. Which of the Big Questions in life are raised in this film? To what extent does it address themes such as: the nature of reality or what is really real; what’s wrong with the world, and what’s the solution; the fragmentation of life in our busy, pluralistic world; the significance of relationships and love; the significance and meaning of being human; whether there is right and wrong, and how we determine it; the meaning of life and history; and what happens at death. 12. What answers, if any, are proposed? To what extent do you agree? Disagree? 13. Summarize in your own words the final conversation between Cliff and Judah at the wedding reception at the end of the film. What is its message? To what extent is this the message of the entire film? To what extent do you agree? Disagree? Why? 14. Is this a film/story which is “modern” or “postmodern?” Why? 15. At one point Rabbi Ben says to Judah, “We went from discussing a small infidelity to the meaning of existence.” What is the significance of this comment? 16 .What fears are raised in the film? To what extent have you had similar fears? How have you resolved them? 17. Review the various statements made by the philosopher Levi in the documentary being made by Cliff. What is he saying? 18. “The eyes of the Lord are on us.” What role does this statement play in the unfolding of the plot? 19. Trace Judah’s spiritual pilgrimage in the film. Are we meant to see it as positive growth or a spiritual decline? How do you know? 20. Woody Allen is one filmmaker who can never be accused of trying to say things bigger than the films he makes. He once said, “Faith is blind. It will work, but it requires closing your eyes to reality.” Is this statement reflected in Crimes and Misdemeanors? If so, how? Rephrase what you think Allen is saying in your own words. Do you agree with his assessment of faith? Why or why not. 21. Allen also said, “I think at best the world is indifferent. At best.” Is this statement reflected in Crimes and Misdemeanors? If so, how? What do you think he means by “the world?” Do you agree that the world is indifferent? Explain.