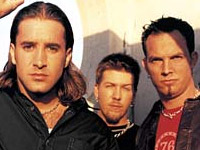 In 1997 a group of rock musicians from Tallahassee, Florida, calling themselves Creed pooled $6000 and recorded their first CD, My Own Prison. Four of their songs rose to be #1 hits. Their second album, Human Clay was released in 1999, with over 10 million copies sold, and as of this writing, on Billboard’s Top 200 hit list for 82 consecutive weeks.

The first thing many notice about Creed is that a number of their songs contain biblical phrases and imagery.

Creed’s lyrics tackle serious topics—sin, conscience, the joy on discovering you will soon be a father, forgiveness, abortion—and in terms that should cause Christians to stop and listen.

Well I just heard the news today
It seems my life is going to change
I closed my eyes, begin to pray
Then tears of joy stream down my face
from “With Arms Wide Open”

I know I can’t hold the hate inside my mind
‘Cause what consumes your thoughts controls your life
So I’ll just ask a question
What if?
What if your words could be judged like a crime?
from “What It”

Still, for all that, Creed is discomfiting to many conservative believers. They do not record with a Christian label. One song contains a swear word. They appeared at Woodstock ‘99. Their songs were used in the soundtracks of Scream 3 and Halloween H2O, two horror films which failed to win the hearts—or approval—of conservative reviewers. And their hard-driving beat and intense sound sets them apart from the praise music which dominates the Contemporary Christian Music scene.

“Are we a Christian band?” Lead vocalist and song writer Scott Stapp asks on their website. “This is a question we are asked a lot because of some of the references made in the lyrics. No, we are not a Christian band. A Christian band has an agenda to lead others to believe in their specific religious beliefs. We have no agenda! Those references were made at a time in my life when I was questioning how I was raised, and searching for where I stood concerning those issues. This is not to say I have abandoned those beliefs, just searching for where they fit into my life.”

The band members do have Christian backgrounds. Stapp was raised, for example, in a Pentecostal home, but he left when he was 17 years old, and has struggled to make sense of his faith. “View Creed,” Christianity Today suggests, “not as a Christian band but as a God-haunted band.” Stapp, I think, would agree. “I am haunted by my past,” he says. “I am haunted by God.”

I wonder why so many believers ask Creed whether they are a “Christian band.” Maybe they are concerned for the salvation of Scott Stapp and his fellow band members, but I doubt it. Those I have talked to haven’t had this in mind. Listeners may also wonder what influences have shaped their imaginations to write songs in which hints of faith and biblical phrases and images are scattered through the lyrics. But if that’s the case, wouldn’t it make more sense to ask about the faith of the lyricist, rather than whether the band itself is Christian? What exactly is a Christian band, anyway?

Many I have talked to ask the question because they ask it about everything. For them the world is divided into two camps, which must be identified. Us and Them. Safe and Unsafe. In and Out. Good and Bad—or if not Bad, at least Questionable. This is an understandable reaction in a fallen world, but it really shouldn’t be taken as part of discernment. It’s the reaction which gives rise to Christian Yellow Pages, and the other forms of tribalism infecting the Christian community. Though we may not like it, reality in a fallen world is far more messy than the question assumes. An author may be a Christian, but his book may be poorly written and subtly untrue. A poet may be both a lesbian and an unbeliever, but she might make us stop and wonder at the searing beauty of the truth she captures in words. Being discerning cuts deeper than simple categories.

The question can even be intimidating and inappropriate in some instances. “Are you a Christian?” is easy for those with assurance—and for the merely self-assured—but harder for others. Young people who grew up in legalistic homes and churches struggle to make sense of the faith, hoping that grace is greater than the tradition they were given. Deeply aware of their struggle, many are too honest to declare themselves too quickly, if for no other reason than they were taught that such struggles do not occur in those who truly know God. Better to ask about their “spiritual pilgrimage”—a question which opens the door to conversation, regardless of the answer.

God is calling out a people to himself, of that we are sure. If we act as though the process must proceed neatly, however, with clear boundaries at every point, we will be disappointed. We live in the time of Not Yet, when redemption is breathtakingly real and salvation is heartrendingly incomplete. The questions we ask—and the music we embrace—should reflect that reality.

“Rock’s Real Rebels” by Kevin A. Miller in Christianity Today (January 8, 2001; pp. 90-91).
Review of Human Clay by JS on www.strangerthingsmag.com. “About Creed”on www.geocities.com.