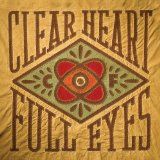 Holding steady for goodness
I had never heard of Craig Finn until he was interviewed on The Colbert Report along with guitarist Tad Kubler. Then Hold Steady performed “Hurricane J” from their album Heaven is Whenever (2010). I was impressed enough that when I learned Finn was releasing a solo album, Clear Heart Full Eyes (2011) I bought it.

I saw Wendy at the Wagon Wheel, didn’t know what to tell her
She said she saw you walking by her building
She said maybe you’re ashamed that things turned out this way
You said you had to hurry off to something…

Finn’s songs are not crafted with melodies I would find easy to sing, but they consistently draw me into his lyrics and seem designed to make us reflective. He notices the brokenness that disfigures everything, but seems rooted in a quiet assurance that redemption can be found in Jesus. The arrangements consist of uncomplicated instrumental accompaniments, always supporting the lyrics but never competing.

In Finn’s songs we hear impressionistic ballads, enough of a story to know what’s happening but never in so much detail that the ballad becomes dated. And Finn’s unabashed Catholicism provides him with hope without being sentimental or without the album becoming a religious one.

Finn says that when he set out to do this solo work he wanted to produce music that was a bit quieter and more narrative than Hold Steady was performing. Since I don’t know Hold Steady’s music I can’t say whether he accomplished that, but certainly the quiet narratives that are woven into the songs on Clear Heart Full Eyes are full of images and phrases that hint of ordinary life, the need for grace, and the hope that is found in Christ.