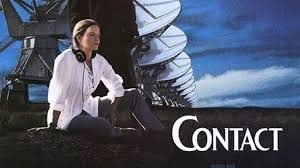 Word is out, in some circles, that Christians should avoid this film like the plague. “The movie is so blatant and one-sided in its atheistic theme that it is difficult to imagine anyone taking the film seriously,” a chaplain warned via email. “Contact may be the most damaging movie to people of faith Hollywood has made in a long time,” concludes Preview, published by Movie Morality Ministries in Richardson, TX. “People who view this movie will not only make contact with intelligent life across the universe, but also with the ignorance and anti-Judeo/Christian bigotry of Hollywood.”

My take on the film is slightly different. I would say that if Christians see only one film this summer, they should see this one. Contact isn’t the most entertaining of this summer’s films (Men in Black probably gets that award), nor does it necessarily have the best special effects, but it’s certainly a cut above the usual fare. It’s been a long time since Hollywood has released a film for popular audiences that raises so many of the Big Questions of life—Contact can easily become a point of contact (no pun intended) for discussion with those who do not share our deepest convictions. Contrary to claims, if you view this movie, you will not make contact with intelligent life across the universe, but simply with the hope of extraterrestrial life which was part of the deeply religious scientism proclaimed by the late Carl Sagan. And I suppose Contact could damage someone, in the same way Sagan’s TV series, Cosmos, could damage someone (nontruth is never neutral), but that only proves how badly Christians need to develop discernment in a world where the truth is suppressed. And yes, there is anti-religious bigotry expressed in the film, though even that is an accurate reflection of how many secular people truly see people of faith. Not only is Contact a good window of insight into our culture, it is a film about worldview, the nature of faith, the need for significance and transcendence, the possibility of truth, the existence of God, the wonder of the physical universe, and the meaning of death. And, as they say around here, that’s not too bad a deal.

We recommend Contact to you. Use it as a window of insight to better understand how a significant portion of your neighbors and colleagues believe and live. Use it as a point of contact to launch a discussion about issues worth talking about. And enjoy it as a film that shows, among other things, how modern technology can actually blur the line between fantasy and reality.

Further Reading
The Universe Next Door: A Basic World View Catalog by James W. Sire (Downers Grove, IL: InterVarsity Press). Must reading for every thoughtful Christian, and no young person should graduate from high school without having worked through The Universe Next Door with care. After defining what a worldview is and listing the seven questions each world view tends to answer, each succeeding chapter explores different world views, including Christian theism, deism, naturalism, Eastern thought, and New Age.

SETI is The Search for Extraterrestrial Intelligence (www.seti-inst.edu), a major research project, funded by both private and government funds, that is worth learning about. The SETI Institute not only consulted with Warner Brothers as the film was made, it has produced a “Life in the Universe Curriculum Series” for use in schools.

The curriculum, complete with teacher’s guides, artwork, transparencies, posters, and videos, is divided into three parts:
“The Science Detectives” for grades 3-4; “Evolution of a Planetary System,” “How Might Life Evolve on Other Worlds?” and “The Rise of Intelligence and Culture” for grades 5-6; “Life: Here? There? Everywhere?” and “Project Haystack” for middle school.

A sample lesson from each of the guides is available, free, on the SETI website—materials which Christian parents, teachers, and Sunday school teachers could use to help their pupils interact Christianly with ideas concerning life, humanness, and the universe which are being taught and believed in the wider culture.

“Mission 10,” for example, in “How Might Life Evolve on Other Worlds?” is entitled, “Inventing Life Forms: The Creation of an Imaginary Species.” The lesson is designed, among other things, to teach that natural selection produces creatures that are adapted to their environment, and to help students “understand the role of chance in events,” by helping them “synthesize knowledge and creative imagination to visualize the evolution of life.” The central part of the lesson involves a game, using the roll of a dice to invent a new life form by determining 23 of the creatures characteristics such as skin, appendeges, size, eating, reproduction, and the like. Under skin, for example, a roll of 1,2, or 3 means scaly skin like a snake, 4 or 5 mucus-covered skin like a slug, and a roll of 6 means leathery skin like a cow. The students draw their creature, and then discuss how their planet might be different from earth, and whether all these creatures could exist in the same environment. “Rolling a die will simulate the role of chance in the evolution of your extraterrestrial creature,” the students are told. “Each role of the die represents a result of millions of years of chance variations that were successful in the extraterrestrial environment.”

Such materials could be creatively used to help younger students think Christianly about creation and evolution. They could be used as exercises in discernment for older students working through books like Darwin on Trial by Phillip Johnson or Darwin’s Black Box by Michael Behe. And they could be used as interesting introductions to an inductive study of the creation texts of Scripture.

1. What was your initial or immediate reaction to the film? 2. Why do you think you reacted that way? Was your reaction godly? 3. What is the message of the film? Consider how Contact addresses each of the following: the nature of faith; the need for significance and transcendence; the possibility of truth;the existence of God; the wonder of the physical universe; and the meaning of death. 4. What does Dr. Ellie Arroway believe about each? What does Palmer Joss believe? What do you believe concerning each? Why do you believe it? Where do you agree with Ellie? With Joss? Where do you disagree? 5. In what ways were the techniques of film-making (casting, direction, script, music, sets, photography, editing, etc.) used to get the film’s message across, or to make the message plausible or compelling? 6. Who did you identify with in the film? Why? Who were we meant to identify with? 7. “Do you think there are people on other planets?” a little boy asks Ellie near the end of Contact. “I don’t know,” she responds. “But if it’s just us, it would be an awful waste of space.” This idea was repeated at several points in the film. How would you respond to this question? Why? What biblical reasons would you give for your position? How would you respond to the idea of “wasted space”? 8. The film was advertised as “a journey to the heart of the universe.” What is the significance of this sound bite? Several well-known journalists appeared in the film, as themselves, in fake news programs. What are the implications of this blurring of fantasy and reality in popular culture? Using the same technology that he used in Forrest Gump, director Robert Zemeckis altered actual film footage of President Clinton (without White House permission), inserting it into the film while “morphing” actors into the background. (In one case, Zemeckis used news footage of Clinton speaking of the Oklahoma bombing, applying his words about this real-life tragedy to the crash of The Machine.) Is there an ethical problem with this approach to film-making? Why or why not?