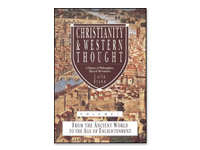 Though many people fancy themselves to be independent thinkers, the truth of the matter is that we are all products of our culture, and thus part of a living and on-going legacy of philosophy and thought. In 1990, Dr. Colin Brown, professor of theology at Fuller Seminary, published Christianity and Western Thought (Volume 1) covering the period from the ancient world to the Enlightenment, which we recommend to you. Now the second volume in the series has been published, covering the 19th century, by two professors at Azusa Pacific University, Steve Wilkens (associate professor of philosophy and ethics) and Alan Padgett (professor of theology and philosophy). The third volume in the series will survey 20th century thought.

Those who want a thoughtful series of textbooks that survey Western philosophy from a Christian perspective will need to add Christianity and Western Thought to their libraries.