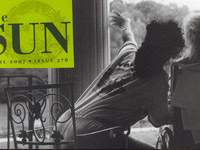 In the April 2007 issue of Sun, a literary magazine, the editor featured an interview with John O’Donohue, an Irish poet/philosopher and former priest. Much of the interview centered on what many people would refer to as spirituality, or in O’Donohue’s words, “the secret landscapes of imagination and spirit.”

The interview began with O’Donohue being asked, “Do you think there is a spiritual hunger in the U.S. today?” Here is his response:

There is a fierce hunger for spirit at the heart of an American culture that has lost all belief in the old language about God. That language no longer resonates for most Americans, nor leads them to wells of nourishment. Ironically, in other areas of American culture, there is a fundamentalist obsession with God. But inevitably this God tends to be a monolith and an emperor of the blandest singularity. Attention to the living God, who incorporates the beauty of the senses and spirit, and is the deepest source of the imagination and the highest calling of intellect, seems very scarce.

New Age spirituality is rising up to try to fill the gap. I do not wish to criticize any system that can nourish people’s spirits, but I find that a lot of New Age writing cherry-picks the attractive bits from the ancient traditions and makes collages of them; it usually excises the ascetic dimension. In general it is not rigorously thought out, but is what I would call ‘soft’ thinking.

Granted, it is difficult to write well about spirit: namely, to bring the lyrical and the philosophical into a true tension. In my writing, I endeavor to excavate the Celtic and the Judeo-Christian philosophical and literary traditions and to bring them into conversation with our modern hunger and questioning.

Then, in response to O’Donohue’s comments, a letter to the editor appeared in the August 2007 issue of Sun:

John O’Donohue says that some New Age writers ‘cherry-pick… from ancient traditions,’ which he believes is ‘soft thinking.’ Actually, that’s thinking. Far better to be an adherent who makes choices than a blind follower, swallowing doctrine like a goose destined for pâté.
I take pride in being a cherry-picker. I am a Buddhist, Pagan, Native American, Shinto, Christian ‘openist,’ for lack of a better term. Too many religious adherents have become insistent that their way is the only way, and I call that soft thinking.

Wouldn’t it be great if we worshiped ideals rather than books? Then, when we encountered the same ideal in another culture, we would recognize its divinity. How many religious wars could be prevented if ideals took precedence over the desire to name and claim? Rather than bending a knee to prophets, we could bend a knee to truth. Rather than idolizing Kwan Yin or Jesus, we could celebrate compassion. Rather than praying to a static entity to show pity on our hungry brethren, we would rise up and act, for the worship of ideals compels us to live up to them.
Darling Poor
San Diego, California

1. What do you find attractive in O’Donohue’s comments? With what do you agree? How would you have answered the question the interviewer posed?

2. What do you find attractive in the letter to the editor from Darling Poor? With what do you agree?

3. How would you define spirituality? How would you express your definition in the marketplace if your desire is to prompt further discussion among your co-workers?

4. What is the historic biblical definition of “spirituality”? What does it mean, from a Christian perspective, when a non-Christian expresses a “spiritual hunger” or a “yearning for transcendence”?

5. Compose a letter to the editor in response to O’Donohue’s comments.

7. Who is the most spiritual person you know personally? What marks them as being “spiritual”?

8. What biblical texts are most essential in a study of Christian spirituality? How do you know?

9. Did O’Donohue say anything which you would challenge or question or disagree? How would you express it in a way to further conversation instead of ending discussion? What questions could you ask that would communicate a real interest in them?

10. Did Poor say anything which you would challenge or question or disagree? How would you express it in a way to further conversation instead of ending discussion? What questions could you ask that would communicate a real interest in them?

11. Have you noticed neighbors or co-workers talking about or expressing interest in issues of spirituality? If “traditional Christianity” comes up in these conversations, what is usually said about it? Why do you think that is? How should a Christian respond to such comments? What questions could you ask that would communicate a real interest in them?

12. Given these reflections, what plans should you make?