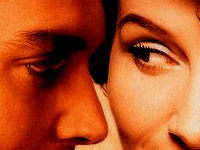 Chocolat is a charming movie, a whimsical fairy tale that takes place “once upon a time” in an isolated and far-off French village. It is also a postmodern fable about neo-paganism, Christianity, and the quest for tolerance in a pluralistic world.

Lansquenet was an orderly village, pious and tranquil, until one evening at the beginning of Lent “a sly wind blew in from the north,” bringing with it Vianne (Juliette Binoche), and her daughter Anouk. From the beginning there is trouble. The townspeople, under the ever vigilant eye of the self-righteous Comte de Reynaud (Alfred Molina), are outraged and offended that not only does this single mother not attend church, she opens a chocolaterie during Lent. Vianne’s kindness, good humor, and delectable chocolates soon win her customers, however, and slowly her shop becomes a shelter for people burdened by brokenness—hurts which have never been allowed to break through the guarded tranquility of village life.

Josephine (played by Lena Olin, the wife of director Hallström) moves in with Vianne, leaving her abusive husband, Serge, finding not only shelter and friendship, but a chance to be creative in helping Vianne make the various chocolates which fill the shop’s displays. Armande, a bitter grandmother, played wonderfully by Judi Dench, long estranged from her daughter Caroline, soon warms to Vianne’s welcome and begins to repair the broken relationship with her grandson Luc. Even Reynaud’s fierce armor is pierced, as we discover his deep grief over the fact that his wife is not on the extended shopping trip he claims, but has left him. More outsiders arrive, this time a traveling band of “river rats,” gypsies who live on house barges on the river, further polarizing the village. By now, culture war has been openly declared. Vianne’s lifestyle is an affront to the villagers’ Christian faith, and the Comte organizes his forces to rid his town of the outsiders who refuse to conform.

Throughout Vianne’s shop there are strange artifacts from a pagan past, and her chocolates are made from a mysterious recipe handed down from the ancient Mayans. And rather than merely satisfy a craving for sweets, these chocolates bring healing into relationships and hope into otherwise desperate lives.

In many ways Chocolat is a simple film which tells a simple story. Like Babette’s Feast, it celebrates the goodness of God’s creation and the glory of human creativity. Both films remind us that food is more than just nutrition—good food, well made and served with love, nurtures both community and a proper sense of delight. The scenes in which Vianne stirs her chocolates on the stove are filmed with a delicious sensuality, and the feast given in Armande’s honor near the end of the film is warmly human and deeply inviting.

On another level, Chocolat is more complex, a fable exploring the postmodern notion of tolerance in a pluralistic society. The Christianity depicted in the film is sad, showing deeply devout believers who, fearful of those who do not share their convictions and values, react by becoming increasingly legalistic and withdrawn in an effort to preserve the purity of their faith. The mystical neo-paganism represented by Vianne is attractive in comparison, and reminds us that when the truth ceases to be beautiful, it is no longer compelling nor plausible. Or as Roger Ebert put it in his review: “Chocolat is about a war between the forces of paganism and Christianity, and because the pagan heroine has chocolate on her side, she wins.” By the end of the film, however, tolerance is achieved. In the past Vianne and her daughter have always had to move on, extruded by the bigotry of villagers who will not accept her. This time things turn out differently, and when the north wind blows again, Vianne scatters her grandmother’s ashes in the air as she resolves to stay and make Lansquenet her home.

Chocolat is not without its flaws. Making the town statue smile at the end is a bit much, and though the change in Reynaud is both welcome and believable, his rolling in the window of the chocolaterie seems a rather heavy-handed way to depict it. Still, it is a charming film by a veteran director. Chocolat is a window of insight into our pluralistic culture, showing the attractiveness of neo-paganism, the ugliness of legalistic Christianity, and what “tolerance” means in our postmodern society. It is also a wonderful film to use as a point of contact with non-Christians, to begin a conversation about things that matter.

Chocolat is also a challenge to those of us who are committed to the gospel of Christ, that our faith would be winsome and joyfully welcoming, without compromise and full of grace.

1. What was your initial or immediate reaction to the film? 2. Why do you think you reacted that way? 3. What is the message(s) of the film? Where do you agree? Disagree? Why? 4. In what ways were the techniques of film-making (casting, direction, script, music, sets, action, cinematography, editing, etc.) used to get the film’s message(s) across, or to make the message plausible or compelling? 5. With whom did you identify in the film? Why? With whom are we meant to identify? Discuss each main character in the film and their significance to the story. 6. How important is chocolate—and food—to the story? What is the Christian view of chocolate/food? Why? How should this be exhibited in a fallen—and starving—world? 7. How was the neo-paganism of Vianne depicted in the film? Why was it so attractive? What lessons should Christians learn from this? 8. To what extent are you conversant with neo-paganism as a Christian? Are you comfortable developing a close friendship with a neo-pagan—say, a Druid? Why or why not? 9. Granting the Catholic setting of the film, compare and contrast the Christianity depicted at the beginning and at the end of the film. In what ways were the two versions of the faith true to the Christian gospel? In what ways were they perversions of the gospel? At what point must biblical Christianity refuse to be “tolerant” (as defined by our pluralistic world)? Why? What will this “intolerance” look like? 10. To what extent is the legalistic Christianity depicted in Chocolat a realistic portrayal of (portions of) the church today? What should we do about it? Why? “I enjoyed the movie on its own sweet level,” Roger Ebert says, “while musing idly on the box-office prospects of a film in which the glowing, life-affirming local Christians prevailed over the glowering, prejudiced, puritan and bitter Druid worshipers.” Even if never depicted in a Hollywood movie, shouldn’t this be the reality in our lives?