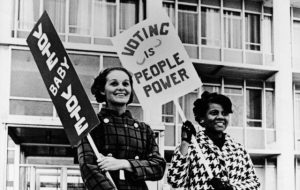 Unless you really like politics, it’s rather hard, sometimes—let’s be honest—to get very enthusiastic about most elections. The constant barrage of commercials, the phone calls at dinner time purporting to be surveys which obviously aren’t, the endless polling and predictions—all of it can make the entire process seem rather tawdry. More importantly, some of us find that none of the candidates accurately mirror our concerns, values, and convictions. Wouldn’t it be nice if ballots included a third option?:

But since that option isn’t open to us, some of us may consider abstaining—at least from some races—and hope that none of our political-activist friends asks whether we fulfilled our duty as citizens.

So, how should we vote when none of the candidates really represent our beliefs and positions? When we agree with one candidate on several important matters and with their opponent on several others?

One solution to that dilemma (for Roman Catholics voters, anyway) is proposed by Catholic Answers. In their “Voters Guide” they say that on most issues our political leaders are simply involved in “selecting the most effective strategy among several morally good options.” The choice involved isn’t between good and evil, but between which practical approach will best solve the issue being addressed. Good people will disagree over such things, and since good and evil are not at stake, political compromise is valid. On the other hand, they insist, there are five issues which are far more foundational, “non-negotiable moral principles that do not admit of exception or compromise.” Here the choice is between right and wrong. The five issues Catholic Answers lists are abortion, euthanasia, embryonic stem cell research, human cloning, and homosexual marriage. Voters, the Guide instructs,

“should avoid to the greatest extent possible voting for candidates who endorse or promote intrinsically evil policies. As far as possible, you should vote for those who promote policies in line with the moral law… Do not vote for candidates who are right on lesser issues but who will vote wrongly on key moral issues… Where ever a candidate endorses positions contrary to non-negotiable principles, choose the candidate likely to do the least harm. If several are equal, evaluate them based on their views on other, lesser issues.”

All of which raises questions that discerning Christians would be wise to consider.

1. Have you ever used a Voters Guide prepared by some organization? Which one? How helpful did you find it? What are the strengths of such Voters Guides? What are the weaknesses? 2. How do you tend to choose which candidate to vote for? How certain are you that your approach represents Christian faithfulness? If you do not vote, why don’t you? 3. What is your response to Catholic Answers’ distinction between “non-negotiable moral principles” and all other issues? Why? 4. To what extent do you agree with their list of “non-negotiable moral principles?” 5. If as Scripture says, “the earth is the Lord’s” (Psalm 24:1), and if part of the reason for Israel’s exile in the Old Testament was their failure to care for the land (2 Chronicles 36:21), is it not essential to include caring for the creation in our list of “non-negotiable moral principles” as Christians? 6. Is it ever possible that during certain periods or for certain offices a candidate’s view of such foundational moral principles is relatively unimportant because they will not face decisions based on them? In that case, might it be more faithful to vote for someone who is correct in other areas, even though they hold moral positions which are contrary to Christian righteousness? 7. To what extent does Christian faithfulness imply that believers will vote for the same candidates? Can equally discerning and godly Christians cast opposite votes? Why or why not? 8. Since we live in a post-Christian and increasingly pluralistic culture, is it possible that the day will arrive when the most Christian choice, the most radically faithful approach will be to refrain from voting? If not, why do you imagine that there will always be candidates which reflect biblical morality? If yes, how will we know that day has arrived? 9. Martin Luther is reported to have said, “Better be ruled by a smart Turk than a dumb Christian.” (Note: Luther was using “Turk” as meaning “Moslem.”) Do you agree? Why or why not? Under what circumstances would you vote for a non-Christian instead of for their Christian opponent? 10. To what extent is the personal faith of a candidate crucial in choosing who you will vote for? Personal character and morality? In some Western European countries, sexual infidelity is not considered a factor in determining whether someone is fit for political office. If you think personal character or morality is important in choosing a candidate, how would you vote if both candidates engaged in sexual practices you believe immoral? Where would these considerations fit in your list of “non-negotiable moral principles?” 11. How do you educate yourself politically? Is it sufficient for faithfulness? What books have you read which explore political citizenship from the perspective of Christian faith? What news and political commentary do you expose yourself to: that with which you already agree, or thoughtful presentations of opposing positions? Why?