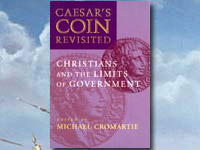 Caesar’s Coin Revisited is another in a series of books containing papers, responses, and transcripts of the discussion from a symposium of scholars and specialists convened by Michael Cromartie, a senior fellow and director of the Evangelical Studies Project at the Ethics and Public Policy Center in Washington, D.C.

The Ethics and Public Policy Center, begun in 1976, conducts a program of research, writing, publications, and conferences to encourage debate on domestic and foreign-policy issues among religious, academic, political, business, and other leaders.