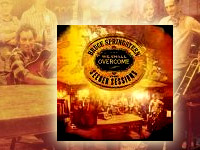 On this album Springsteen joins an astonishingly accomplished group of folk musicians to play a set of traditional songs, including “My Oklahoma Home,” “Old Dan Tucker,” “John Henry,” and “Jacob’s Ladder.” The songs were recorded in one take, without rehearsal in an old farm house, so as to try to preserve the immediacy of the folk genre.
Some of the strongest songs are spirituals, blending a realistic portrayal of life in a sadly broken world with a certain hope that justice someday would be done.

Well Moses stood on the Red Sea shore
And smote’ the water with a two by four
Pharaoh’s army got drownded
O Mary don’t you weep.
(“O Mary Don’t You Weep”)