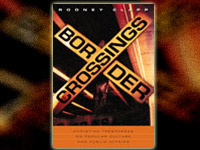 One of the ways to be discerning about what magazine articles to read (compared to what to skip, skim, or merely file), is to watch for certain authors. Some writers—such as Rodney Clapp—have proven to be insightful time and again, and that’s a precious gift. He is editorial director of Brazos Press, and his occasional essays have appeared in Books & Culture, Christianity Today, and re:generation quarterly, among others. Now a collection of nineteen of his articles have been published as Border Crossings.

As with any good essayist, Clapp’s interests are broad. In this collection there are pieces on such topics as Winnie-the-Pooh, consumerism, shame, family values, liturgy, the country-western singer Tom T. Hall, jazz, and The X-Files. Something for everyone, and a chance to learn from a thinker who seeks to see from the perspective of faith. You might not always agree, of course, but even the disagreement will be a stretching experience. And as with all such collections, each essay can be easily fitted into the gaps of our busyness.

I want to suggest that Christians may best reclaim Christmas, indirectly, by first reclaiming Easter. Ours is an ironic faith, one that trains its adherents to see strength in weakness. The irony at hand could be that a secularizing culture has shown us something important by devaluing Christmas. In a way, Christians have valued Christmas too much and in the wrong way. I defer again to Hoffman, who writes,
‘Historians tell us that Christmas was not always the cultural fulcrum that balances Christian life. There was a time when Christians knew that the paschal mystery of death and resurrection was the center of Christian faith. It was Easter that mattered, not Christmas. Only in the consumer-conscious nineteenth century did Christmas overtake Easter, becoming the centerpiece of popular piety. Madison avenue marketed the change, and then colluded with the entertainment industry to boost Christmas to its current calendrial prominence.’
The Bible, of course, knows nothing of the designated holidays we call Easter or Christmas. But each holiday celebrates particular events, and there can be no doubt which set of events receives the most scriptural emphasis.

I suspect that we might best de-idolize romantic love by giving more attention to friendship in the context of koinonia, or churchly community. I have in mind Aristotle’s highest form of friendship—the friendship of those devoted to a common cause. Christians are those people caught up in an adventure involving nothing less than the destiny of the world. As such, we hardly need the comparatively puny and petty adventures of romantic love. Christians do not get married because monogamy is an aphrodisiac; they get married because this is the key way they participate as sexual beings in an adventure far surpassing the potentials of any aphrodisiac, the adventure of witnessing to and building up God’s kingdom on earth.

The important question for Christians, then, after five, ten, fifty years of marriage, is not, ‘Am I still in love with my spouse?’ The better question is, ‘Are we stronger, deeper, continuing Christian friends?’ That is to say, are we supporting and challenging each other in the faith, in service to one another, to our children, to our church, to our neighbors? In the words of Diogenes Allen, when Christian marriage is friendship rather than romance, ‘We do not fight dragons or villains, as in “love stories,” but fight with ourselves, as more and more of our self and our partner is revealed with time and through the ups and downs of life. We face an inward struggle with what we are [and, I would add, a political struggle with what the world wants us to be]. What is won is oneself and the other. Married people become people who love each other.’ In short, the sex lives of Christians can improve. But they can improve only once we learn how to make love after we have fallen out of love.

(“From Family Values to Family Virtues,” p.124.)
The argument I want to make here can be simply stated: Jazz can make us—especially the ‘us’ of white, middle- and upper-class, relatively comfortable American believers—better Christians. Put more pointedly and specifically, jazz can correct what James Cone, I am afraid with all too much justification, has called ‘the heresy of white Christianity.

(“That Glorious Mongrel: How Jazz Can Correct the Heresy of White Christianity,” p. 185.)