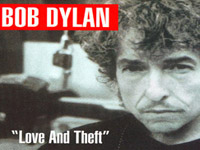 I listened to Bob Dylan’s latest CD for the first time a few days after the terrorist attack on the World Trade Center. I was in Jackson, Mississippi, stranded there when air travel was suspended on Tuesday, September 11. I was supposed to fly home on the 12th, but planes had been grounded. Finally, on Friday I was able to rent a car. It had a CD player (though no cruise control), and since I was looking at two days of driving, I stopped by a music store and bought a copy of Love and Theft.

It is Dylan’s 43rd album, and had been slated for release on 9/11, the first studio album he has recorded since Time Out of Mind in 1997. “Love and Theft takes us on a full-blown tour of American song,” Rob Sheffield notes in his Rolling Stone review. “Dylan veers into country, ragtime, vaudeville, deep blues, cocktail-lounge corn, the minstrel show… Love and Theft comes on as a musical autobiography that also sounds like a casual, almost accidental history of the country. Relaxed, magisterial, utterly confident in every musical idiom he touches, Dylan sings all twelve songs in a voice that sounds older than he is, a grizzled con man croaking biblical blues.”

As I drove north on the interstate through the Mississippi country-side I thought of the pastel hues with which this rural landscape had been painted in the Coen brothers’ film O Brother, Where Art Thou? A few miles outside of Jackson I slipped Love and Theft into the player. The second song is “Mississippi,” and in a way that unsettled me, the lyrics spoke directly to the events that had overtaken my life that week.

Every step of the way, we walk the line
Your days are numbered, so are mine…
Sky full of fire, Pain pouring down
Nothing you can sell me, I’ll see you around
All my powers of expression and thoughts so sublime
Could never do you justice in reason or rhyme
Only one thing I did wrong
Stayed in Mississippi a day too long

I am not suggesting that Dylan predicted the events of September 11; uncanny concurrences do not imply cause and effect. On the other hand, I was not surprised to find that Love and Theft resonated deeply with my life and world—Dylan’s music has been doing precisely that for thirty years. To be relevant, great artists need not predict the future because a greater truth is at work: great art speaks to present reality, regardless of how the future happens to unfold.

“His words have always had an almost Biblical uprightness,” Bono writes. “No matter where you are in your life, there’s a Dylan record that helps you map out the locale.” Pulitzer Prize winning author Michael Chabon remembers being introduced to Dylan’s music as a thirteen-year-old. “I thought I recognized,” he says, “in the ache and the ardor of that windblown, Jewish-cowboy voice, the contours of a world I was just beginning to know.” Novelist Larry Woiwode first heard Dylan in 1963. “The first sound of his voice entered me like electricity. I didn’t think of him as a great poet, as academics have, but a troubadour, a newsbringer in touch with his and the world’s makeup and not about to falsify his report for any favored political group or audience.”

Chart out Dylan’s music over time, and you chart out American culture—and Dylan’s pilgrimage within that culture—out of the long folk, black gospel, and blues tradition through the idealistic rebellion of the Sixties to the terrorist sobriety of the new millennium. “Every one of the records I’ve made has emanated from the entire panorama of what America is to me,” Dylan says. “A song is a reflection of what I see all around me all the time.”

The Achievement of Maturity
When Rolling Stone asked him about this song (“Mississippi”) in relation to 9/11, Dylan’s response was marked by insight made possible only by maturity. He began by quoting a few lines from a poem by Rudyard Kipling.

“If anything,” he said, “my mind would go to young people at a time like this.”

Mikal Gilmore points out that 2001 was something of a milestone in Dylan’s life. He turned sixty, won an Oscar (for Best Original Song: “Things Have Changed” in the film Wonder Boys), toured almost non-stop, released Love and Theft, which says Gilmore, “makes most contemporary pop music seem jejune and passé by comparison,” and began writing a series of autobiographical books based on his music, the first slated for publication in 2002. What is noteworthy, however, is not these particular achievements except insofar as they serve as markers of Dylan’s maturity, not simply in years, but in musical and poetic integrity—a maturity achieved by only a few, whether artists or not. This is not a voice seduced by the youth culture. As Wheaton College professor Alan Jacobs notes, Dylan “never spoke as a young man, but rather as the custodian of ancient traditions.”

“In Dylan,” Dr. Jacobs writes, “the prophet meets the bluesman: the ancient laments of Israel rejoin songs born in slavery and the cotton fields. From this vantage point it seems that it should have been obvious—though of course it wasn’t—that Bob Dylan would become not just a monument of popular culture, but also a key figure in the social history of American religion.” Immersed as he was in the heritage of blues, gospel, and folk music, he has written songs of rich poetry which have captured the imagination of thousands. The real test of this is not Dylan’s continued popularity, but rather the numerous lines and images from his lyrics which are imprinted in our culture’s common language. Listen: they’re everywhere, blowin’ in the wind.

A Spiritual Pilgrimage
Woven through Dylan’s music is the story of his spiritual pilgrimage, which is, Woiwode says, his “glory.” Made most explicit on “Slow Train Coming”, “Shot of Love”, and “Saved”, Dylan’s confession of faith was greeted enthusiastically by Christians, who quickly turned against him when succeeding albums failed to be as explicit. Like an unfaithful bride who leaves unless she hears the same words repeated daily without fail, the Christian community is a fickle lover. “I suspect,” Woiwode says of Dylan, “he found the liberty of serving his Savior in his art rather than through churchy confession.” Which reminds me to pray for him, since the pressures of his world must be enormous, and sadly, he can not count on the people of God to either recognize or appreciate the good news of art well done. “He has sung with eloquence about so many issues at times when the news about them was needed,” Woiwode says, “and has so often hit the target dead center, I often wonder if he isn’t hot-wired to a manifestation of the Holy Spirit.”

One of the prophetic themes which has threaded its way through Dylan’s music from the beginning is the brokenness of this sad world. In 1963, Dylan rasped out “A Hard Rain’s A-Gonna Fall,” turning the metaphor of the cool refreshment of rain into the possibility of judgment.

The image returns in “High Water (For Charley Patton)” on Love and Theft, but this time the flood seems deeper, the danger greater.

Highwater rising, six inches above my head
Coffins droppin’ in the street like
balloons made out of lead
Water poured into Vicksburg, don’t know what I’m gonna do
Don’t reach out for me, she said, can’t you see I’m drowning too
It’s rough out there
Highwater everywhere

The brokenness is also reflected in fragmented relationships. Some of his early love songs reflected the casual promiscuity of the sexual revolution. But they could also be warm and tender, since for all the folly of his generation, Dylan has continued to believe—correctly—that love is indispensable and relationship essential.

If not for you,
Winter would have no spring,
Couldn’t hear the robin sing,
I just wouldn’t have a clue,
Anyway it wouldn’t ring true,
If not for you.
“If Not for You” (1970)

And on later albums (listen to Planet Waves, for example) he has songs of mature and responsible love, which both celebrate committed relationships even as, in the tradition of the Song of Songs, they quicken the pulse.

The Haunting Voice
For all his albums, Dylan is perhaps best thought of as a troubadour. He is a tireless performer, and seems to be on the road constantly. If you want to know his music, he says, you need to come to a live performance. It is in concert that the music lives. Both times I’ve seen him in concert he said little, allowing his music to speak.

In 1965 Dylan picked up an electric guitar and alienated the audience at the Newport Folk Festival. Prior to that he had, in good folk tradition, used only acoustic guitar and harmonica, held on a wire stand before his mouth. They didn’t appreciate the change, but Dylan forged ahead and transformed rock music, which he somehow sensed would be the genre (in contrast to folk) of the next generation. In the process he issued a call for social justice, reminded us of love and the reality of God, made poetry come alive, and helped millions make sense of their world in light of the biggest questions that can be asked.

The danger for anyone who truly faces the fragmentation and fallenness of the world is either despair or cynicism, the twin temptations of our postmodern age. For all his gritty honesty, Dylan has never succumbed to either. Sometimes, like U2 on All That You Can’t Leave Behind, he has sung of grace. Often, as on Love and Theft, he makes us laugh, not with frivolous wit, but with a humor which is redemptive, giving glimpses of hope in the midst of pain.

His is a haunting voice, not smooth and trained and controlled, but variable, earthy, on edge, and compelling. Over the years Dylan has sung as if his voice is another instrument, never predictable and always very much alive. Listen to him sing and the impression is not something nice flowing over you, but of deep truths made painfully beautiful, firmly planted so as not to be easily forgotten.

What good am I if I say foolish things
If I laugh in the face of what sorrow brings
If I just turn my back while you silently die
What good am I?
“What Good am I?” on Oh Mercy

Indeed, what good are we?