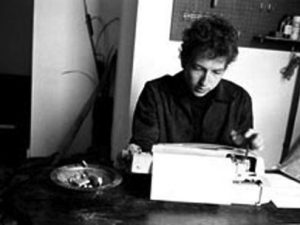 A Very Small Faithfulness
This week I’ve been writing a lecture on Bob Dylan, and so have been listening to a lot of his music. Though this hasn’t come as a surprise to me, I’ve been impressed once again by the timelessness of his best songs.

Timelessness is true of all great poetry of course. Other poems can be lovely and beloved at the moment yet still grow so stale with the passage of years that they eventually are forgotten. To make matters even more tenuous in thinking about Dylan I am speaking of popular music, where the life span of things tends to be short. I am no poet and so have no idea what causes a poem to be born. Whatever the stimulus, a few poets can give birth to lines that address the moment at hand with sudden clarity, yet not be limited to that moment. Somehow the words and metaphors reach deeply enough into the human condition to produce sparks of insight at later times, about very different moments in the lives of very different people. If you doubt that, watch Shakespeare Behind Bars (2005) in which a group of inmates in a maximum-security prison in Kentucky, all guilty of heinous crimes perform “The Tempest,” and wrestle with its timeless themes of guilt and humanity.

Dylan’s 1964 classic, “It’s Alright, Ma (I’m Only Bleeding)” does not follow the normal formula for a hit rock song. It’s long—113 lines worth, with no repeated chorus—and is so dense as to demand concentrated listening. When it was released on the album, Bringing it all Back Home (1965) it took up a full 7½ minutes. That was the year I graduated from high school, and the song felt like a sudden revelation. It went on and on and yet not a single line seemed superfluous. It spoke to the headlines of the day, full of an escalating war in Viet Nam and race riots in Watts. These were things that mattered, and that mattered to me, because I was eligible for the draft, and because talk of such things was everywhere. Somehow Dylan managed to merge concerns about war and the proliferation of idols in an increasingly pluralistic culture so our vision of the world was suddenly clarified.

It seemed to be the song for the moment in 1967, and yet when I listened to it again this week, it seemed to have arisen from the headlines that stretched out before me as I read this morning’s paper. Poets who can crystallize experience into words and phrases, metaphors and images, cadences and rhymes can sometimes speak beyond what they have experienced to name the bigger questions that lay below the surface of life.

We need such poets. And we need ears to hear. Life moves too quickly and is too crowded with busyness, too cacophonous, so that clarity in distinguishing the important from the merely urgent is a rare and precious gift.