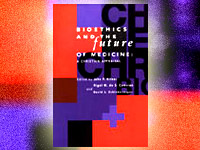 Thousands of medical ethicists and bioethicists,” Richard John Neuhaus says, “professionally guide the unthinkable on its passage through the debatable on its way to becoming the justifiable until it is finally established as the unexceptionable.” As so many ethicists, physicians, and ordinary folk slide unseeing down various slippery slopes, we can be grateful that a growing number of thoughtful Christians are addressing bioethical issues with care and insight. On the cutting edge of this movement is The Center for Bioethics and Human Dignity, which, in collaboration with Trinity International University and the Christian Medical and Dental Society, sponsored the conference at which the papers collected in Bioethics and the Future of Medicine were presented. For those whose calling requires them to think through such issues, we recommend both the Center, its conferences and publications, and Bioethics and the Future of Medicine, the first in a series of volumes “addressing the contemporary bioethics agenda from a perspective which is both keenly informed of current questions and deeply grounded in the excellences of the Hippocratic tradition as it has been mediated and interpreted by the distinctives of Christian faith.”

Part I: The Practice of Medicine
“The Christian Stake in Bioethics: The State of the Question” by Nigel Cameron, Ph.D. (Trinity International University, Deerfield, IL).

“The Profession at the Fault Line: The Ethics of Physician Income” by David Schiedermayer, M.D. (Medical College of Wisconsin, Milwaukee, WI).

“Saying the Unsaid: Quality of Life Criteria in a Sanctity of Life Position” by Jerome Wernow, Ph.D. (University of Louvain, Belgium).

“From Personhood to Bodily Autonomy: The Shifting Focus in the Abortion Debate” by Francis Beckwith, Ph.D. (University of Nevada, Las Vegas, NV).

“The ‘Right to Die’ in the Light of Contemporary Rights-Rhetoric” by J. Daryl Charles, Ph.D. (Prison Fellowship, Reston, VA).

“Until Death Shall be No More: Christian Care for the Dying” by Greg Rutecki, M.D. (NE Ohio Universities College of Medicine, Canton, OH)

The quote by Richard John Neuhaus was taken from his essay “The Return of Eugenics” in Commentary (April 1988) p. 19.