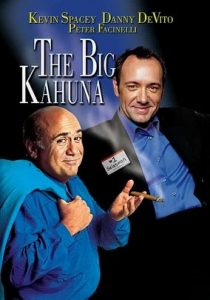 This movie has such a simple plot that most of the action occurs in a single room. And most of the action involves nothing more than talking. Three men talking in a room. In a hospitality suite in a hotel, to be exact, at a convention in Wichita, Kansas. A not-very nice hospitality suite complete with cheap refreshments and a view looking out on a very boring part of town. The three are there to land a big contract with Dick Fuller, the president of another company whom they refer to as The Big Kahuna. Their company sells industrial lubricants. But there is a complication. One of the men is far more committed to Jesus Christ than he is to industrial lubricants.

Kevin Spacey plays Larry Mann, a fast-talking, ironic, profane, deeply cynical, superb salesman for whom nothing seems to matter quite as much as closing the deal. Danny DeVito plays Phil Cooper, Larry’s long-time, slightly older and slightly worn-out partner, whose impending divorce is making him wonder whether life in the fast lane is all it’s chalked up to be. “I feel like I’ve been shaking somebody’s hand one way or another all of my life,” Phil says. And Peter Facinelli plays Bob Walker—young, clean-cut, newly married, nervous about being at his first convention, and a born-again Baptist.

The three host an open bar in the hospitality suite, waiting for The Big Kahuna to show up so Larry and Phil can work their marketing magic. Afterwards, as they talk about the failure the evening represents, it is discovered that Dick Fuller had shown up, but without a name tag, and that Bob had spent the long evening in conversation with him. Fuller was depressed over the death of his dog, Bob says, and the conversation simply went on from there. “We talked about Christ,” Bob says finally, nervous, yet certain he has done the right thing. “About Christ?” screams Larry. “Did you mention what line of industrial lubricant Jesus uses?” When Bob mentions that Mr. Fuller has invited him to join him later at another party, Larry and Phil insist that he goes. “It’s like putting me in the deep end and seeing if I can swim,” says Bob. “No,” Larry replies, “it’s like pushing you off a cliff and seeing if you can fly.”

The Big Kahuna is a remarkable movie, based on a play, Hospitality Suite, by Roger Rueff, who also wrote the screenplay for the film. Some critics and viewers find the scope of the film (one room) sufficient for the stage but too narrow for a film, but I find it bracing when dialogue is so sharply written that it sweeps you into the lives of the characters. DeVito and Spacey are utterly believable as Phil and Larry. And unlike so many Hollywood productions which caricature believers unfairly, Facinelli depicts a born-again Christian who you could find actually sitting in a Baptist pew on an average Sunday morning. Near the end of the film, when Phil finally penetrates Bob’s armor, his fatherly speech is both tender and compelling. All three characters develop in the course of the film, and it is this development, revealed in the dialogue, that makes the film so satisfying as cinema.

As the final credits roll, we hear the script from an actual advertisement that consists of a series of platitudes given as advice. Though irritatingly bland, the recitation reminds us of two facts. It reminds us that we live in a consumer culture, and that most people are still looking and waiting for their Big Kahuna.

“There are two religions in America, one spiritual, one secular. The first worships in churches, the second at business conventions,” Roger Ebert says. “The Big Kahuna is about an uneasy confrontation between these two systems of faith.” Or as movie critic Michael Elliott summarized in his review on Crosswalk.com: “Is it possible to swim with the sharks and still be a fisher of men?” Relatively few films raise so many questions so explicitly or invite discussion about such a range of issues: the meaning of life, the nature of human relationships, the essence of sales as a vocation, the relationship of evangelism to marketing, and the place of personal faith and witnessing in the marketplace.

We recommend The Big Kahuna to you. Rated R for the language that is nothing but what you’d expect to hear in a hospitality suite filled with salesmen trying to sell industrial lubricants.