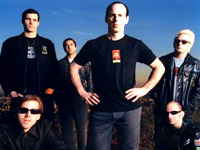 The Empire Strikes First is intelligent punk. Bad Religion a band whose music makes clear they aren’t merely interested in entertaining their fans. They want to convince them to settle for nothing less than the truth.

Our consumer society absorbs every trend into the mainstream, so that even punk fashion ends up being transformed into something fashionable. On the other hand, serious punkers still tend to be marginalized by the middle-class. Their preferred music, loud, aggressive and anti-traditional makes polite society nervous. We don’t know what to expect, or what to say, and may fear that violence is probably close at hand. And if my reading of middle-class attitudes is at all accurate, it is usually assumed that punk rockers can’t be all that intelligent or well educated or serious about the deepest questions of human existence.

Bad Religion not only breaks those stereotypes, it breaks them with a vengeance. For one thing, their music consistently raises in-your-face challenges about the things that matter most.

Striking at mental apparitions
Like a drunk on a vacant street
Silently beset by the hands of time
Indelicate in its fury
An aberrant crack as skeletons yield
To unrelenting gravity
While viruses prowl for helpless victims
Who succumb rapidly
(Tell me!) Tell me;
Where is the love?
In a careless creation
When there’s no “above”
There’s no justice
Just a cause and a cure
And a bounty of suffering
It seems we all endure
And what I’m frightened of
Is that they call it “God’s love”
Twisted torment, make-believe
There’s a truth and we all submit
“Believe my eyes,” my brain replies
To all that they interpret
I know there’s no reason for alarm
But who needs perspective when it comes to pain and harm
We can change our minds; there’s a better prize
They call it God’s love
My pain is God’s love
[“God’s Love”]

In “A Punk Manifesto,” an essay available on Bad Religion’s web site that I commend to you, front man, singer, and biologist Greg Graffin (he has a PhD from Cornell) explains what he believes is the essence of punk. As you read, reflect on how this fits with your perception of the punk rock movement.

“Punk is: the personal expression of uniqueness that comes from the experiences of growing up in touch with our human ability to reason and ask questions.
“Punk is: a movement that serves to refute social attitudes that have been perpetuated through willful ignorance of human nature.
“Punk is: a process of questioning and commitment to understanding that results in self-progress, and through repetition, flowers into social evolution.
“Punk is: a belief that this world is what we make of it, truth comes from our understanding of the way things are, not from the blind adherence to prescriptions about the way things should be.
“Punk is: the constant struggle against fear of social repercussions.”
On The Empire Strikes First , the musical creativity of the arrangements and performance help drive home the intensity of the lyrics. “The music has the furious beat and driving buzz saw guitars of classic punk rock,” it is noted on their web site, “but when a vocal chorus cuts in, it is surprisingly harmonious and emotionally evocative, reminiscent of The Beatles or The Everly Brothers.”

This is not the music of quiet reassurance that all is well. Bad Religion provides no lullaby to drown out the cries of the lost. In “Los Angeles is Burning,” the wildfires raging in the hills near the city become metaphors for the unexpected yet certain destruction that threatens every life. The cynical apathy of a generation that feels caught in the unstoppable wheels of a world impossible to control is brought up cold in “Social Suicide.”

Shadows entertain the unwashed masses
Scholars explain their numb reactions
I don’t know if I can find Truth
But I’m sure it won’t come from following you
But it’s time to turn the tide
It’s social suicide.

And the brutal cost of the war in Iraq which is carried disproportionately by those who can least afford it is decried in “Let Them Eat War.” “Seize a few dollars from the people who sweat / Because it’s freedom or Debt an they won’t question it.”

“Drop dead, it doesn’t matter,” she said
“It only hurts when I laugh,” she said
“Sometimes it’s never a crime
“To spend the day in bed”
She made certain that the curtains were red
To dream better by the light they would shed
She leaned back, tilted her head
And this is what she said…
“You can’t win; think it over again
“I can’t win; look at the trouble I’m in
“We can’t win and we’re stuck here together
“Yeah, I hope it will last forever.”
“Don’t ever dare to hope,” he said
“So I’m never let down too bad
“I know there’s nowhere to go
“So I’ll just stay here, instead”
He knew better than to pull at a thread
They unravel like the thoughts in his head
He looked out; it filled him with dread
And this is what he said…
“You can’t win…”
[“Boot Stamping” on a Human Face Forever]

For Bad Religion, Christianity is not seen as a viable option. In “Sinister Rouge” the sad reality of violence in the Church’s past is held up for review. And “Live Again (The Fall of Man)” casts doubt that a good life results from the hope of eternal life in another world.

The road is narrow, the horizon wide
And they say what’s waiting on the other side is so rewarding and the ultimate prize
But what good is something if you can’t have it until you die?
Despite tenacious clinging like a grain of sand watching its foundation wash away
Drunk with the assertions they know they can’t defend
Confident that they might live again.

This is not the shrill voice of spoiled adolescents mindlessly pushing against the traditions of their parents. It is the impassioned cry of a band whose well-read, intelligent, and thoughtful lyricist believes he has seen something of Christian faith and finds it lacking. Lacking real authenticity, lacking compassion for the marginalized, lacking a deep commitment to social justice, lacking a reasoned foundation for belief. Lacks which by God’s grace must be met with a holy spirited commitment to follow Christ into the world with grace, even at cost.