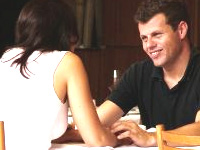 Imagine you are sitting with some friends—perhaps at work or a coffee shop—and one says he’d like some advice. “Ashley and I have been going out for almost a year,” Justin says. “We really hit it off, love the same music, and enjoy hanging out. So, we’re thinking of moving in together. One of us is always staying at the other’s apartment anyway, so we could save time and a pile of money if we consolidated living arrangements. Here’s where I need your help: I’d like to move in with Ashley, but don’t know if I should. My mom says I shouldn’t, but then you know how mothers are. What do you think?”

Imagine the conversation that results. Someone tells how some friends knew when to move in together, and how it turned out. Someone else tells how the last time she moved in with someone it was a disaster, and recommends that Justin hold onto his apartment for a few months after he and Ashley move in together. And someone who knows Ashley tells Justin he’s crazy not to marry her. “You shouldn’t let her get away, Justin,” she tells him.

“Nope,” Justin responds. “Ashley and I have talked about that. We don’t intend to stay together forever. We need to concentrate on our careers, and marriage would complicate that. We both need to be free to move if an opportunity comes up, and neither of us wants to be tied down. Marriage isn’t an option.”

Now imagine that Justin turns to you, the only person who hasn’t said anything, and, as far as you know, the only Christian in the group. “What do you think I should do?” he asks.

What do you say?
I suspect that many Christians will explain why they think it would be wrong for Justin to move in with Ashley. They will assure Justin that God loves him, that God’s law defines what is best for people created in God’s image, and that things work out better when we live according to his word. They may mention the sanctity of marriage, the problems with promiscuity, and the fulfillment possible when men and women live faithfully together as God intended. And they might mention that this might not be easy to hear, but that friends don’t let friends hurt themselves without warning them of the danger.

I also suspect that the Christian who says these things does it with good intentions: a desire to speak the truth in love, to stand for righteousness, and to pray that God will use this to draw Justin to himself. As a dutiful Christian, they may even wonder if anything except this can be said. To not say it feels like a betrayal of the truth, and they certainly don’t want to be so anxious for Justin to like them that they sacrifice the truth. Certainly the rhetoric in many Christian magazines and on Christian radio stations suggest this is precisely the stand required if America is to be won back to Christ.

Still, I have a two problems with this approach.

My first problem is that, in my experience at least, such conversations always turn out badly. I realize that as Christians we dare not only say things that everyone likes. Sometimes the truth hurts, and though we must exercise care at such moments, being certain of what, when, and how we speak, Christian faithfulness includes speaking the truth, even when unpopular. My problem is not that non-Christians might dismiss the truth, but that they are told too little of the truth to actually understand what they are dismissing, so end up merely turned off by a caricature of the truth. Can Justin really understand the 7th commandment if he has no sense of the character of the God who commanded it? Does the prohibition of promiscuity make sense if he knows nothing of the deep human and spiritual meaning of sexuality? Is telling Justin he is wrong going to be convincing if it is based on an authority which Justin does not accept? It is one thing if Justin hears the gospel, understands it, and rejects it. It is another if he is turned off by an appeal to a command that when taken out of context sounds like little more than an up-tight puritanical view of sex, and the very antithesis of a life-affirming conception of human relationships. And that is precisely how, in my experience, such conversations usually turn out.

My second problem—closely related to the first—is that this usual “Christian” response is less than fully biblical. Consider, for example, when Jesus was talking to the woman by the well in Samaria (John 4). She had been married five times, and was living with a man to whom she wasn’t married. Not only did Jesus never tell her this was wrong, he affirmed her, and used her admission to reveal her deep spiritual thirst, not her guilt. Consider how Paul talked about the truth when he was in Athens (Acts 17). He was talking to people who did not share his deepest convictions, so he appealed not to his authority (the Scriptures) but to their’s (pagan writings and shrines). And finally consider how often Jesus did not answer the immediate question that someone asked (for example, John 12:34-36), but instead said something that probed into the issues which lay behind their question. He said what they needed to hear, addressing deeper foundational issues which they needed to understand before the answer to their specific question would make sense.

When we weave these biblical threads together, another approach to responding to Justin becomes apparent.

First, we could ask some questions, questions designed to take him seriously as someone made in God’s image, and to discover the authority he follows in his life. Why is it important for him to know what we think? What does he see as the pros and cons of moving in with Ashley? Why does he think his mother disapproves? How does he usually decide what is right and wrong? What authority does he base his decisions on? What does his mother base her opinions on? Is he satisfied with his approach to right and wrong? How does it work out in daily life? Would he commend it to us?

If Justin presses us for what we think as Christians, we could respond not with the 7th commandment, but by helping him see what is behind it: “Let me tell you what I believe about sex as a Christian,” we could say. “I believe sex is the coming together of two people made in God’s image in a way that is both physical and spiritual, both mystical and time-bound. When two people have sex they become one in the deepest core of their being so that ripples are set up in their lives that flow out beyond space and time. It is an act that takes us beyond the here and now to a deeper level of reality.” Hopefully that will prompt discussion that touches on real issues of the heart.

And if Justin asks whether Christians believe sex outside of marriage is wrong, we could once again respond by addressing the reality of grace which lies behind his question: “There is something unique in Christianity,” we could say, “something that is utterly different from any other religion or religious impulse. In every other religion, people obey the god in order to gain the god’s blessing, in order to merit the god’s attention or care. In Christianity, however, all that is turned upside down. In Christ we receive the blessing of God, so that he becomes our heavenly Father and Christ our elder brother. He puts his grace on us, unites us with him, so that we obey his word not because we have to, or to earn merit, but out of love and gratitude. Unless you understand that, talking about his law simply doesn’t make any sense.”

I do not write this because I think that if we approach things this way every conversation will turn out well, and all the Justins in our life will be drawn to Christianity. We live in a fallen world, and no “approach” should be made into a technique that “works.” On the contrary, I write this because I wonder if we have thought deeply enough, and biblically enough, about these all-too-common encounters in our pluralistic world. There is a difference between arguing over what is right and wrong, and truly engaging someone with the gospel.

We should think about this creatively, because if we’re engaged with the culture to any degree, the scenario about Justin isn’t all that farfetched.