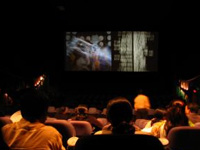 Since movies contain the stories of our culture, thoughtfully engaging them can prompt discussion about things that are otherwise almost impossible to raise in ordinary conversation. Movies such as Wit, 13 Conversations about One Thing, and Magnolia, for example, seriously explore the Big Questions of life—in the case of these three films: death & eternal life, meaning & significance, and guilt & redemption. To invite our friends to discuss such movies invites them into a conversation already underway, begun by the artist making the film. Though everyone won’t respond to every film in the same way, movies like these raise such topics so compellingly that we must either enter the conversation, or find some way be distracted by something else.

“In an increasingly privatized, secularized society, people will not listen to the gospel from strangers,” Tim Keller says. “Not to people who come to their door, not to strangers who call them, mail them, or even advertise to them.” Our world is pluralistic, and our neighbors are not “unbelievers,” but believers in things other than Christianity. So, we need an entrance into life, a way to join their ongoing conversation about things that matter, since most of them are hesitant (for good reason, sadly) to join ours.

“The question young people around me are asking,” Andy Crouch writes, “is not ‘Is Christianity true?’ but ‘Is Christianity worth believing?’ It is a subtle difference. The first question can be answered by marshaling the evidence, which is a job for lawyers. The second requires the demonstration of an attractive vision, which is a job for artists.” And for those who may not be artists but who nurture, through a love of Scripture, a sensitivity to creativity and a delight in engaging the art popular with their friends.

Unlike “evangelistic encounters” which require us to insert the Big Questions into the conversation, discussing a movie allows the film to raise the Big Questions. Since most people love to talk about movies, the setting provides a safe context for conversation. Perhaps we have watched Wit, and so are talking about death, and the possibility of eternal life. Or we watched Whale Rider, and people are wondering whether every belief—whether of the Ancestors who speak through the whales, or Jesus—is not equally valid. One thing is certain: talking about such things would have been almost impossible except for the catalyst of the movie.

Which raises a question that I often hear when I speak on using film as a point of contact with non-Christians. The question is this: “If the film prompts people to talk about the Big Questions, does the discussion ever get past that to actually presenting the gospel?”

Consider “the gospel”
What do we mean by “presenting the gospel?”

For many Christians, it means presenting a specific summary of the gospel, perhaps one they learned in a training course on evangelism. It may even be the presentation that was helpful in bringing them to faith. Making this presentation lets them feel they’ve been faithful as a witness while failing to do so raises a specter of guilt and failure.

But where in the Scriptures do we see Jesus using a summary presentation of the gospel? We’re told this approach is “guaranteed” to produce results, but is efficiency or being like Jesus our goal? We are free in Christ from the need to conform to the expectations of others, or to some program. It is true that practicing how to talk about our faith can be a helpful exercise. It can help us think about how to explain things clearly, to anticipate possible misunderstandings, and to talk in terms non-Christians can understand. Still, if Jesus wasn’t constrained by having to insert some presentation in order to keep his encounters with people from being a failure, neither should we.

Besides, while these summary gospel presentations might have made sense when most non-Christians shared many of our values, they are counter-productive in a pluralistic culture. A couple of generations ago, when these evangelism programs were developed, the vast majority of non-Christians shared basic Christian beliefs. Most believed in right and wrong, that Jesus had died for sins, and that heaven and hell were real places. So, inviting them to trust Christ as their personal Savior made sense.

But today we live in a pluralistic world. What sense does it make to invite someone to receive Jesus if they are not sure Christianity is plausible, or worth believing? If someone can not imagine how one crucifixion out of so many, 2000 years ago in an entirely different culture can possibly have significance for them personally today, will not an invitation to believe Jesus died for them merely convince them that Christianity has no relevance?

Perhaps we should begin thinking of “being a witness to the kingdom” instead of “doing evangelism.” Our responsibility is not fulfilled simply because we have made some presentation. Insisting on that without first being certain the person we are talking to is ready to hear it is to treat them with disdain instead of as people created in God’s image.

A conversation. I see film discussions as ongoing conversation, not a chance for me to achieve some evangelistic agenda. Which means that sometimes I never get to “the gospel” and still see the evening as an unqualified success. Many non-Christians have had such negative experiences with Christianity, for example, that I am eager for them to experience the hospitality of my home. I want them feel cherished, and to know that I take them and their beliefs seriously, even if those beliefs are antithetical to my faith. I want them to know that I listen, and am eager to give them the gift of unhurried time. I want to demonstrate that I believe they are of infinite value, created in the image of God—even if they happen to deny his existence.

And when I do these things, I am witnessing to the grace of God.

Questions beget questions. I ask a lot of questions in these discussions, and that almost always prompts questions in return. As we talk about the film and as the Big Questions are raised, I ask what people think about them, and why they believe what they do. Why their convictions are attractive to them, and what difference they make in their life. Whether they have considered any alternatives, and how their convictions and values compare to how they were raised. I ask because I am interested, because they are people worth knowing, and because their answers open a window, at least a crack, into their hearts. And I ask because I want to know how I can speak to them of the grace of God in terms that they might be able to understand.

Almost without fail, asking questions of people prompts them to ask questions in return. About what I believe, and why. About why I find those beliefs plausible, and whether I am not merely reflecting the indoctrination of being raised in a Christian home. I try to answer creatively and in ways that might resonate with their deepest yearnings and fears.

Meeting and moving. These ongoing conversations are an opportunity to meet someone where they are, and by God’s grace find a way to move them on towards faith in Christ. It is a process. Many people have never considered such things, or have suppressed the yearnings and questions of their heart.

We need to invite our non-Christian friends to tell us where they stand in relation to Christian faith. The answer to “Where are you with Christianity?” Timothy Keller says, can be discovered if we are willing to prove that we will not get defensive. By and large, Keller says, non-Christians tend to fall into one of four possibilities:

“Dissatisfied—Do you find aspects of Christianity unacceptable, distasteful? What is your trouble with Christianity? Where is your beef?

“Indifferent—Do you find Christianity simply unappetizing or irrelevant? Where does Christianity fail to challenge you? What would be relevant to you?

“Cautiously interested—Are you in a learning mode, interested, gathering information, and yet not completely understanding? What still does not make sense to you?

“Actively seeking, yet hesitant—Are you really searching for Christ, but find some fears hold you back? Does it seem to cost a lot and you are wondering about that? What costs give you pause?”

Obviously, where a person is on this continuum will make a difference. Mistaking where they are means providing answers to questions they aren’t asking and that they find neither relevant nor interesting. And on the other side, learning where they are makes possible a walking alongside them as they make their way along their spiritual pilgrimage.

Spiritual pilgrimage. Sometimes the movie discussion finally ebbs and fades, and if people are comfortable, the conversation can still continue. If people feel safe, they might be open to being invited to tell the story of their spiritual pilgrimage. (Obviously word choice matters here: Christians have “testimonies,” but everyone has a “spiritual pilgrimage.”) I have found that non-Christians, once I have earned their trust, are pleased to tell their story, and are amazed anyone would care. Listening provides the opportunity to ask more questions, and at times they have asked me to share my own story.

Often their story gives hints of pain or yearning (as ours should, too) that we need to have ears to hear. The story of loss, of fragmentation, of broken dreams and realized fears. We must touch such precious things with compassion, so that we share in their suffering. Simple responses about how Jesus “solves” such things can trivialize their pain and serve to only convince them that Christianity skates over the surface of life instead of addressing their deepest needs.

Invitation to Bible study. We have led many movie discussions with non-Christians, and prayed that God would be at work. Sometimes a film prompts intense discussion, while with the next group it falls flat. Whatever the case, we try to be faithful, intentionally offering hospitality, listening, and unhurried time to those who sit in our living room.

Over time, some begin to see our home as a safe place. We have not flinched when they challenged our faith, or debated our ideas, nor have we judged them for how they live. And when we sense we have earned their trust, we invite them to join our Bible study. “It’s an opportunity to study the ancient documents which tell the Christian story,” we tell them. “Even if you don’t believe it, at least you’ll know you gave the Bible an honest try.”

A surprising number have accepted our invitation, and have become active participants in our Bible study group. And by God’s grace, some have come to faith.

Movie discussions aren’t the only way to launch discussions about the things that matter most, but they are a good way. And the conversation they prompt is an opportunity for those of us who love Jesus to witness to the kingdom by both what we say and how we act. And that’s an opportunity that’s simply too good to miss.

“Zarathustra Shrugged: What apologetics should look like in a skeptical age” by Andy Crouch in Christianity Today (September 3, 2001) p. 101.
“Evangelism Through ‘Networking’” by Timothy Keller (July 1992).