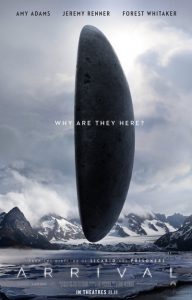 A gift from beyond the horizons of time
The plot of this movie is relatively simple: twelve massive spaceships suddenly appear at various points around the globe, and a linguistics professor is asked to help the world learn to communicate with the aliens that have arrived. Nothing is ever quite that simple, of course so complications arise. Rumors spread, populations begin to panic, some world leaders suggest caution while others insist we must strike first or risk being obliterated, and soon the various nations in which the ships have appeared are not talking to one another. If scientists are learning anything the information isn’t being shared. Division and suspicion reigns supreme, and no one knows what the aliens intend or want or even if it is really possible to communicate with them at all. Verbal communication is ruled out as impossible, but then our linguistics prof realizes that written communication holds the key.

Colonel Weber (played with cool efficiency by Forest Whitaker) shows up at the office of linguistic professor Dr. Louise Banks (played by Amy Adams) to tell her the world needs her services. He escorts her to a temporary base established near the site of one of the alien ships where she meets the third member of the team tasked with sorting out what’s going on, a theoretical physicist named Ian Donnelly (played by an understated Jeremy Renner). They establish contact with the aliens, and, well, the movie goes on from there, but if you want to know what happens, watch the film. It’s well done, and unlike many science fiction stories, invites viewers to not just watch and enjoy, but to think. Besides, the special effects are wonderful, never flashy but subservient to the story, and the ones involved with the aliens’ writing are stunning, imaginatively beautiful.

Good science fiction is able to focus our attention on issues and questions that otherwise can seem merely theoretical. After all, a little nuclear devastation and the appearance of zombies tends to concentrate one’s mind on the meaning of humanity, the finality of death and the possibility of hope. Does it not? And that is the genius of the genre.

What is impressive in Arrival is that the themes that are explored get to the very heart of what it means to be human. We live in time, but dream of transcending it, and wonder if since we can have flash-backs, is it ever possible that some—perhaps poets, seers or the specially gifted—have flash-forwards? And isn’t it strange we are defined by language—the unique quality all humans share—yet find our communication difficult and divisive? The aliens, whose ships seem to dwell in a cloud, claim to bring a gift of unity to a fractured humanity, but are we even capable of receiving it and will it be sufficient?

From a Christian perspective, Arrival is a clever reversal of the ancient story of Babel (Genesis 11), with its confusion of languages and rupture of human unity. Poet Kathleen Housley captures the moment of divine intervention so well in her poem, Babel:

The demolition blast was so intense
it blew away their common tongue.
Across the plain of Shinar,
parts of speech shrapneled the ground.
Syntax rained down like gobs of tar.
Nouns whirled in vortices of brick dust.
Mute, the people stood owl-eyed
in a heavy ash-fall of vowels,
shielding themselves from verbs
that ricocheted through the hush…

(Her complete poem, so worth reading aloud, can be found on Ransom’s website.) A case can be made that our modern pursuit of science and technology is animated in part by a deep desire to reverse Babel, and that perhaps mathematics will be the language that can finally unite human beings in truth with which all can agree. And what if a word came from outside the horizons of our world that provided the key to finally tie all language together?

As I watched Arrival I was aware of how deeply I yearn for Babel to be reversed, its curse undone. This film touches on one of the most profound expressions of our brokenness and hopes against hope for healing and restoration.

1. What was your initial or immediate reaction to the film? Why do you think you reacted that way? 2. Some people, even many Christians, have difficulty with science fiction as a genre. Why is that? In what ways should science fiction be especially attractive to Christians in a post-Christian world? To be effective, a science fiction story must draw us in so that we suspend disbelief and enter the world that is being imagined. Does Arrival succeed in this? Why or why not? 3. In what ways were the techniques of film-making (casting, direction, lighting, script, music, sets, action, cinematography, editing, etc.) used to get the film’s message(s) across, or to make the message plausible or compelling? In what ways were they ineffective or misused? 4. What is made attractive in the film as the central themes are explored? How is it made attractive? Note the various special effects that are used in the film—the alien ships, their appearance in mist/clouds, the interior of the alien ships, the aliens’ writing, the aliens, the flashbacks and flash-forwards in time and discuss their effectiveness. 5. With whom did you identify in the film? Why? With whom were we meant to identify? Discuss each main character in the film and their significance to the story. 6. How is language so intimately intertwined with human unity, disunity, division and conflict? Is it possible that the deep yearning we have that the divisions of humanity be healed is a signal of transcendence? 7. What insight does Kathleen Housley’s poem bring to the discussion? 8. Why might the biblical story of the Tower of Babel hold particular fascination for our Western secularized culture? What is the biblical solution to Babel, and what texts would you use to follow the theme throughout scripture through the narrative of creation, fall, redemption and restoration? How could you talk about this in a way that non-Christians alienated from the church might be intrigued?