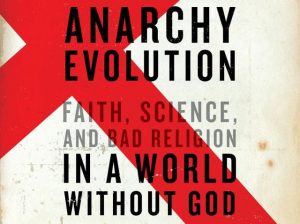 Resisting authority, embracing anarchy
Over the past few years I have read the authors known in the media as the New Atheists, and have tried to take their arguments seriously. I expected to enjoy Christopher Hitchens’ book more than I did since I’ve long enjoyed his essays and reviews in Vanity Fair, the Atlantic, and other magazines for their wit, polemical style and razor sharp prose. However, God is Not Great (2007) is little more than a secular diatribe. And I had read enough of Richard Dawkins to expect him to seem rather pompous in The God Delusion (2006) and was not disappointed. What I found disappointing, however, was the theological naivety—if not ignorance—he displayed, because I had assumed his research would be more careful. And both men seem to argue that an enlightened society cannot tolerate religious belief—to Hitchens it is dangerous and to Dawkins it is delusional. I recommend both books for their societal impact, but think both are compelling primarily for those who are already convinced naturalists.

There is one book to come from a New Atheist, however, that is markedly different, and that I am eager to recommend. The book is Anarchy Evolution: Faith, Science, and Bad Religion in a World Without God by Greg Graffin. (Steve Olson, a science writer co-wrote it but the story, ideas, and argument are Graffin’s.) Those familiar with popular music will recognize Greg Graffin as the songwriter, vocalist, and front man for the influential punk band Bad Religion. He also has a PhD (Cornell University) and when he’s not on tour he teaches life sciences and paleontology at UCLA.

Anarchy Evolution is thoughtful, accessible, and civil. It tells Graffin’s story of growing up in a secular family (both parents were professors) with fundamentalist Christian grandparents, his love of music leading to the formation of Bad Religion, his early penchant to resist authority and question dogma, and how his later studies in science made him realize that the anarchy of punk music fit the anarchy implicit in evolution.

But there is a big problem with resisting authority. If you can’t rely on it, what can you rely on? Many people feel very uncomfortable giving up the certainties on which they have based their lives. They think that without a bedrock of belief, their lives will have no purpose or meaning. Many religious people, for example, believe that without religion there can be no morality. They fear that humans might use their free will to do terrible things—steal, rape, murder—if they did not believe in a caring God constantly watching over and keeping them on the path of righteousness.

For those of us who see no need for supernatural entities, this is a highly offensive belief. It condemns our lives as deviant and amoral. It also has no empirical proof. The countries that are least religious tend to have the most law-abiding and generous citizens. It doesn’t even make sense, as philosophers since the time of Socrates have pointed out. Either harming other people is wrong, in which case God is unnecessary, or harming other people is acceptable, in which case God’s admonitions are misguided.

Some people have a more basic fear. I’ve had friends who think that if they question their beliefs in God or spirituality or some “higher purpose,” they will begin a long, lonely descent toward nihilistic anarchy in their lives. They fear that they will see them-selves as no more than soulless animals, biological mechanisms, bits of a temporary consciousness that will soon be gone forever.

This fear is not entirely misplaced. The natural world and the evolutionary processes that produced us are anarchic. There is no ultimate reason for our existence. We were born to parents who loved us, if we were fortunate, and who wanted us to do well in life. But we were not placed on this earth for some divine purpose that only communion with the spirit world can reveal.

However, people make a big mistake if they conclude from the anarchy of the physical world that life has no meaning. I draw just the opposite conclusion. The purposelessness of the natural world emphasizes the tremendous meaning inherent in the human world. [p. 3-4]

Anarchy Evolution explains in some detail why Graffin has come to believe that, “Naturalism can provide the foundation for building a coherent and consistent worldview.” [p. 7] The book is straightforward and honest, addressing the usual arguments that Christians tend to raise to refute a naturalist explanation for life and reality. It’s as if Graffin has been listening to what the evangelical community has been saying and decided to write a thoughtful response. Most Christians will find statements that will surprise them, and will discover that their apologetics, especially their arguments against naturalism will need serious updating.

Anarchy Evolution is not merely a presentation of what Graffin believes and why, it is a warm personal testimony of the delight and confidence he takes in his worldview.

Life is an act of endless creativity. With all its simmering tragedy and occasional catastrophe, a human life is an amazing thing to contemplate and experience. None of us had any special plan laid out for us when we were born. By abandoning the idea that an intelligent designer created us, we can wake with each dawn and say, “What’s done is done. Now how can I make the best of the here and now?” Life is never static. Despite catastrophic tragedies, life has persisted in evolving new varieties of unimaginable forms. I find comfort in the narrative of evolutionary history. When I create, I feel that I am a participant in the grand pageant of life, a part of the ongoing creative engine of the universe. I don’t know if that feeling is enough to replace the solace of religion in the lives of most people, but it is for me. [p. 251]

Please read Anarchy Evolution. If possible, read it with friends, including some non-Christians who might find that Graffin expresses their deepest convictions and values. Take the time as you read to listen to the music of Bad Religion, since it expresses the same beliefs in musical form. And reflect as objectively as possible on what he is saying, what makes it attractive to so many, where you would agree, what you might challenge, and why. And then reflect on how to state and live out your convictions in a way that a watching non-Christian world might find attractive enough to discuss.