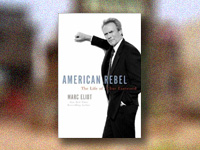 Raw Life
It was impossible to predict that the tall rugged actor who played Rowdy Yates in all 217 episodes of the TV western, Rawhide, would eventually direct and act in some of the best films to be produced in the final years of the 20th century. The early films that Clint Eastwood is best known for were mongrel works, the trio of spaghetti westerns directed by Sergio Leone and filmed in Italy, Fistful of Dollars (1964), For a Few Dollars More (1965), and The Good, the Bad, and the Ugly (1966). Later Eastwood would create the unforgettable character of Inspector Harry Callahan, the renegade cop in Dirty Harry (1971), Magnum Force (1973), and The Enforcer (1976). These roles are one-dimensional yet iconic, the silent gun-slinging loner whose heroism seems both unremarkable and unplanned as he wanders through a world where injustice preys upon the weak and powerless. Yet, two decades later Eastwood would be responsible for a series of films, as actor and director, that touch on some of the deepest issues of the human heart, including Unforgiven (1992), Million Dollar Baby (2004), and Gran Torino (2008). In maturity the “man with no name” is playing roles marked by nuance and depth, characters we can relate to because they are like us. His best films are good enough to make most fans forget about clunkers like Every Which Way but Loose (1978) and The Bridges of Madison County (1995).

I decided to read American Rebel because I respect Clint Eastwood’s obvious talent, his giftedness in the cinema over a lifetime of work, and so wanted to know more about him. By the time I finished the book, I was even more impressed with Eastwood the actor and director but far less impressed with Eastwood the man. His single-minded pursuit of control over his work in Hollywood has given him freedom to make the films he wants, but in the process people have been shunted aside when it suits him. His radical individualism has allowed him to carve out a distinctive vision for his craft, but it has also made him willing to use women for his own sexual ends, and the unabashed promiscuity and broken relationships that litter his path to the top are a sad testament to his self-centeredness.

Few books that I have read in the past few years have been a better reminder that we human beings are, in Francis Schaeffer’s term, glorious ruins. Gifts are not given only to the virtuous, and though the tower constructed at Babel was idolatrous and destructively divisive it was also a monument to the creativity of its makers as made in the image of God. The Scriptures are critical of the misguided motivations but not the craftsmanship, the technology, and engineering that was involved.

The questions I need to keep before myself as a Christian in this situation are these. First, do I understand that this also applies to me—that whatever giftedness I may possess comes with both blessing and with curse? Certain sins may not be present as patterns that tear at the woven tapestry of my life, but sins certainly are present to rend the beauty of what could be. All fallen people share a common fallenness. And second, have I trained myself to see primarily the curse or the blessing in the work and lives of others? Sometimes we say we are children of the light but seem primarily eager to spot and comment on the darkness.

Clint Eastwood is one of the master storytellers of my generation, and I am grateful for the hours of conversation he has prompted through the films he has made. His movies like his life are a reminder that we live in a world where injustice is rampant and where the yearning for justice that resides deep inside is loudly insistent. Something is wrong, we know it, and we hope for something better. It’s called redemption. In one way, that’s all Clint Eastwood is about.