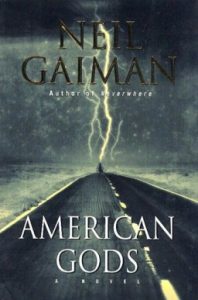 A battle of the gods
American Gods, by Neil Gaiman is probably the most significant work of fiction I’ve read in the last several years.

The plot is rather simple, yet the ideas behind it are profound. America is the land of immigrants, and as people came they brought with them their old gods and myths. The Irish arrived and leprechauns began wandering the woods. Nordic peoples arrived, bringing Odin. Bilquis was brought from Africa, a vicious goddess of love, fertility and sex that devours her lovers (read, worshippers) with her vagina. Immigrants of Slavic descent brought Czernobog, a brutal god that misses the days of blood sacrifice. There were many more, now mostly forgotten and ignored unless they decide to make some scene, which they occasionally do though the event is usually explained away by a society that actually believes science has the final word on reality. The immigrants to America brought their gods but succeeding generations did not believe in them, and without worship the gods are diminished. Now a series of young new energetic gods have appeared, gods like Technical Boy and Media, powerful and slick. A whole society bows before their screens, ordering their time and energy to fulfill the demands of these new gods for whom worship requires one’s life. Conflict between old and new is inevitable, and American Gods tells the story of a road trip across the heartland of America as the final battle approaches.

American Gods is a violent, bloody story, full of cons and deceit, sex, death and lies. These are the old gods, after all, and they were not pleasant. And the new ones are voracious, compelling, seductive, and addictive. All of them, both ancient and new roam the earth seeking whom they may consume. Everything is at stake, and no one except the gods seem to take it seriously.

Interestingly, Jesus does not make an appearance. Gaiman says he wrote a scene with Jesus but it didn’t fit the story and so he took it out. Actually, the innocuous, success-driven American version of Jesus doesn’t really fit in with these loud, dark, raucous, vulgar gods. The book will offend some readers—and the Starz television series even more—and rightly so since the gods that vie for the soul of America let nothing stand in the way of their quest for worshippers.

Gaiman is a master storyteller, using compelling prose, suspense, an anything goes plot and the yearning in ancient myths to draw us in. His vision of America is mystical, far closer to a Christian view of reality than a naturalistic one. He depicts reality not as mere cause and effect but the setting for warring hosts that seek dominance and that feed on souls, demanding lives be given to them. He sees the world of advanced modernity not primarily in terms of science and advance, but as it truly is, a fallen world in which gods jostle for attention and where neutrality is impossible. In American Gods Gaiman expresses a yearning I think is widely found today, namely the desperate wish to believe that the world is an enchanted place, as it once was when the old gods ruled. The impersonal, empty, cold cosmos of natural science is unsatisfying, a lonely place for those created in the image of God.

American Gods ushers us into an America where dreams matter, where reality is a richly layered experience, where life is impossible without reference to the divine, and where we may be lost, but we are most definitely not alone. And where the God of the Christian story, the one who died as redeemer so his worshippers could have life stands in vivid, stark contrast to gods old and new.