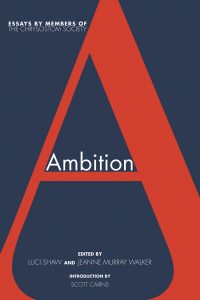 Ambition carries us into terrible places. I don’t understand why it has such a good reputation. People remark that so-and-so is very ambitious, and we’re given to understand that so-and-so is full of drive and moxie. Even when the ambition edges into shadier territory, and we start modifying it with adjectives like “blind” or “ruthless,” admiration still clings to our sense of the word. “My. That’s an ambitious project,” the teacher says to the student who has just announced that she wants to decode the human genome or write a five-volume novel based on a ninth-century Icelandic saga. Bless her heart, she’s in way over her head. But you’ve got to admire her ambition.

Where will she be in six months? Most likely, sunk in a nest of notes and books and web sites. Maybe she’ll be grimly trying to chew her way through the task she’s set for herself, acknowledging with small despair that she’s already months behind the timetable she had set for herself. Maybe she’ll already have given up and be playing video games. No matter what, she’ll be witnessing the gulf between her ambition and her skills and strength. Like standing at the edge of a chasm that must be crossed, and realizing the length of rope in your hand is only fifteen inches long.

Ambition is a false friend. It encourages us to imagine ourselves bearing home the victory. We hear the cheers from the crowd and see our picture on TV where we look a good deal better than we usually do in pictures. In the case of particularly triumphant ambition, our enemies and detractors have been pushed to the front of the crowd. There they watch our apotheosis with impotent rage. I’ve always appreciated the psalmist who included in the rhapsody of the 23rd Psalm not only the gracious pleasures of the Lord, but the incredible satisfaction of having a table set before us in the sight of our foes. If you have an imagination like mine, you can linger on that moment for quite a long, sweet time.

The problem is that eventually we have to return to our regularly scheduled programming. The cat box needs cleaning. The tattered spot on the sofa looks just terrible. We’re behind on three projects for work and we’re sick of all of them. We know every single corner and turn of our lives, and they’re small and unenviable and dull. The truth is that a lot of our enemies are doing significantly better than we are, and the moments we give in to ambitious daydreaming only serve to point up the tawdry minginess of what we’ve actually accomplished

I’m not supposed to think like this. Rightly applied, ambition is the goad that will prod me into getting the sofa reupholstered, and going on not only to finish but to excel at my tasks at work, using them as a launch pad to blast off so that my potential greatness is recognized and rewarded—whoops, I’m daydreaming again. And the cat box still needs [to be] cleaned.

Just about any monastic or faith tradition would remind me to keep my eyes trained on what I’m supposed to be doing, to live in the present and let the future take care of itself…

This is a pretty un-American approach. We are people who have founded our identity and tradition on the nearly sacred idea of ambition. What could be more ambitious than the thrilled, lovely hope of a child to be president one day? That’s what Jimmy Carter told his mother, adding that he meant president of the United States. When he informed her, she reportedly told him to move his feet from the bed. That’s a mother who doesn’t truck too much with ambition.

But she didn’t get in the way of it, either. Maybe her boy was going to be president of the United States, maybe not. No reason he shouldn’t have a shot at it so long as he remembered not to put his feet on the bed.

Excerpt from “What’s a Heaven For?” by Erin McGraw in Ambition, edited by Luci Shaw and Jeanne Murray Walker (Eugene, OR: Cascade Books; 2015) pp. 2-3.