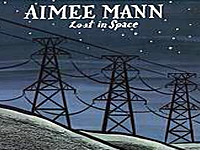 Aimee Mann does not try to produce singles that will become hits; she writes and sings songs that are meant to get under your skin. Her clear voice, enunciating every word with bell-like clarity, uncovers the fragmentation every fallen person carries within themselves, though few of us have the courage to look it squarely in the face as honestly as she does. As one critic has noted, usually when “an album is over, it’s over. Mann’s can haunt you for years.” The opening cut, “Humpty Dumpty,” from her latest CD, Lost in Space, reminds us that try as we might, we simply can’t get ourselves together again:

The eleven melodic and moody songs on Lost in Space are united by a common theme which Mann summarizes as “obsession, compulsion, depression and addiction.” But don’t imagine they apply merely to those on the fringe of society, the druggies hooked on crack or pop musicians shooting heroin. “I think everybody has that kind of behavior, everybody has that tendency at various times” she says in Rolling Stone. “They have this compulsive behavior where they’re trying to alter their mood by whatever means necessary. It’s really interesting too, because people have a direction that seems healthy, like they exercise all the time or work constantly and it’s hard to call ‘em on it, although it’s really clear it comes from this really obsessive place.”

For the past decade or so, Aimee Mann’s music has been languishing in the throes of a rapidly changing music industry. Caught in contracts with labels that were bought up and then forgotten, she achieved national attention when her music was featured in Paul Thomas Anderson’s hard-hitting film, Magnolia, earning her an Academy Award nomination. Now she has begun her own label, SuperEgo Records, the name reflecting her abiding interest in psychology and the dysfunctions that afflict us and fragment relationships in this sad world.

Critics at their worst
could never criticize
the way that you do
no, there’s no one else, I find
to undermine or dash a hope
quite like you
and you do it so causally, too.

Aimee Mann’s is a voice of yearning and honesty which slips occasionally into a cynicism born, I think, of seeing no clear way out of the alienation that afflicts us. She does not celebrate the brokenness, nor is she impressed with the sentimental hope that the next relationship will magically sweep all the problems away. “You paint a lovely picture,” Mann sings, “but reality intrudes.” Sometimes our seeking for love merely inflames the difficulties. “Now that I’ve met you,” she asks in “Deathly,” “would you object to / never seeing each other again?” Yet the search continues, that someone will, in the words of the song that forms the heart of the film, Magnolia, “Save Me.”

You know what it’s like
The long goodbye
Of the hunger strike
But can you save me
Come on and save me
If you could save me
From the ranks
Of the freaks
Who suspect
They could never love anyone.

It is uncomfortable to have to face the reality of a fallen world. I prefer to keep things from getting too messy, and don’t like it when conversations and needs spiral out of my control. We say our busyness as Christians is in response to the great need around us, but I wonder if that is the entire truth. Isn’t it possible that the ever-expanding swirl of activities are also a distraction from the hard brutal edges of life in a fallen world? Since time is in such short supply we even imagine we can engage in evangelism without first being engaged in the lives and needs of people.

We have crossed the Rubicon
Our ships awash, our rudder gone
The rats have fled but I’m hanging on
Let me try, Baby, try.

She is correct, and yet…the solution does lie in relationship and love, but trying is not enough. There’s only one relationship large enough to embrace—and save—a world on which the dust of death lies like a shroud. Only a personal relationship with God through Christ can get to the heart of the problem. The people of God are called to exhibit that relationship before a watching world. How we love one another, and the reality of our walk with God—neither can be faked, and neither are optional.

In the liner notes to Lost in Space, Aimee Mann commissioned the graphic novelist Seth to write a story. A man walks through empty streets at night at the onset of winter, in wonder at the beauty of the stars. He hears music, “an almost imperceptible tinny sound,” and discovers it is coming from a garbage bag on the curb, where someone tossed a greeting card which contained a music chip. “Alone in the darkness,” the man reflects, it “seemed deeply funny… and profoundly sad.” Aimee Mann looks unflinchingly at the sadness of this alienated world, and concludes not that nothing matters, but that something is horribly wrong. May our gaze be as honest, so that our message will sound like the good news it truly is.