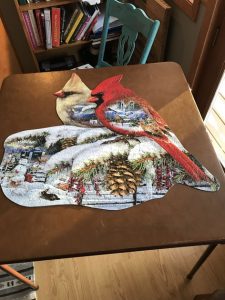 There have been a few random thoughts running through my head the past couple months as I reflect on the past year.

You know, both Denis and I turned 70 in 2017. Since then I’ve been chewing on that like a piece of gristle and choking a little over this whole thing of getting older. This chewing brings up some niggling questions. Like, what have you done with your life that is worthwhile? Where’s my energy gone? Where’s my resolve for following through on projects I’ve begun? How come I can’t seem to keep up with what EVERYone else is doing? (As usual EVERYone is exaggerated and refers to the three or four amazing people who haunt me.)

Comparison, my thief of joy

Lately I’ve battled feeling worse than ever about myself. My lack of discipline. Just name an area and I’m a slacker. (I hope this is partly a psychic issue and not complete reality. So pitiful.) Some of this  trauma has arisen because I’ve witnessed what others have done this past year. The troubling thing is that many of them are older than we are.

I mean, Luci Shaw who must be in her late 80s is probably somewhere building her own log cabin and writing another book of poetry. (She was at the L’Abri Conference in Rochester earlier this month and her workshop was scheduled at the same time as mine. I felt lucky to have anyone show up to mine. Update: She had to cancel because she was sick with influenza. Sadly.) Eugene Peterson is doing interviews with Bono and still writing. Bill Edgar is traveling the world teaching and playing jazz clubs and is the oldest prof at Westminster Seminary. I could go on. Oh, and another couple who stayed with us a number of years ago while one of them was being seen at Mayo (I won’t reveal their names); they are pretty amazing as authors of many books and leaders in the Christian world. They, too, must be in their 80s now, but a couple years ago they moved THEMSELVES in a rented moving van from Chicago to Philadelphia where he continues to preach and teach. They bought a home with a dining area so large they can host 50 – 70 people at a time. And of course, there is our dear friend Steven Gilchrist Garber, who is younger, yes, but at the rate he is going he’ll be in orbit around the solar system before long. To say nothing of our very own board members who are world class in their own ways.

Right. All I want to do is read novels, play games and work jigsaw puzzles. And drink a little Molson’s Canadian.

This is the mildly toxic climate in which I live – reminding myself that life is a spiritual battle, fighting the accusations and insults of my conscience, and forever going to confession and drinking grace dry.

Cast your bread on the water …

Then, like ghosts from the attic, this past year we heard from some young people scattered across the globe, who somehow grew up while we weren’t looking, those young high school students we ministered to back in our Albuquerque days when Denis was a youth pastor and I worked beside him. Those teenagers who we loved, who spilled coke on our carpets but made us laugh, who frustrated us no end because at times all they wanted to do was wheelies with their dad’s cars in the parking lot and prank one another.

A woman, an accomplished artist, wrote: “From you both the seeds of truth were planted in my mind and heart. I learned from you biblical authority, thought and transformation from studying scripture. Most of all I was accepted and loved, yet at the same time challenged to grow in faith even when I wanted to wimp out.”

There were several others who contacted us to say we played a part in leading and caring for them when they were young and distracted, yet tender-hearted and how they continued following the Lord through the years. Hearing about this seemed perfectly timed to encourage us just when we needed it and to remind us that few of us know how much of the love and call of God penetrates the hormonal haze that surrounds teenagers. It was both made my heart so happy but was also hard to fathom.

Honest, I don’t tell these things so you will applaud, but so you can look at your own life and give thanks to God and be amazed that God works in and uses people like us despite our fumbling around and feeling horribly unsuited for anything more than saying grace at the table. Er. Denis does much better at this stage of our lives, seeing more clearly the long trajectory of our story together doing what we can as we follow God’s calling.

Perhaps I am just tired. Or maybe I’m losing a bit of cognitive ability. Not sure. I know there are scriptures that warn us against comparing ourselves with others. That is a good and important exhortation. “Comparison is the thief of joy,” Teddy Roosevelt liked to say. So one of my goals this year is to be reminded to carry my own load and not worry so much about how big and important a load you are carrying and I’m not.

The Comfort of Christ

This past Sunday as we took communion a wonderful peace descended on my heart. It had something to do with the knowledge that what we do each Sunday is exactly what God has prescribed for us to do. We do the same thing over and over year after year century after century because we are human and God knows how easily we forget what we are about and why. Every week I stray. Every week I come up with some disgusting sin that shames me – like envying these wonderful people mentioned earlier. We come to the table to remember Jesus and to be cleansed and forgiven.

Every single week we leave hearing the same words spoken by the pastor:

Eternal God, heavenly Father, you have graciously accepted us as living members of your Son our Savior Jesus Christ, and you have fed us with spiritual food in the Sacrament of his Body and Blood. Send us now into the world in peace, and grant us strength and courage to love and serve you with gladness and singleness of heart; through Christ our Lord. Amen.

I didn’t mean to end on a sermon. Please take it as directed at myself. Unless you share some degree of mis-fitness with me.

Surrender to the Goal

I have Goals for the year! (Although I’ve told my husband, who loves the word Goal almost more than he loves me and often writes Goals and Lists, how much I dislike them and what they imply about one’s lack of discipline –  I surrender. They may be useful. Sometimes. So:

*** Finish a manuscript about the early years of our married life that follows The Exact Place.

*** Spend more time with grandchildren. (They need grandparents whose job is to love them excessively without exception.)

*** Figure out what to do about our 50th wedding anniversary. All our friends have traveled the world it seems, while we’ve barely managed to tiptoe to the edge of our state.  Which puts us in a category of of of …  you tell me.  Don’t get me wrong. I’m not hankering after a trip to Hong Kong or anything like, but something doable? Affordable? Exciting, but not out of control? We are thinking Coast of Maine. (I love that pounding ocean.)

One final thing about the past year:  it may have been one of Denis’ and my best years together. It’s been sweet and easy. He thinks I’m sassy and funny and I think he is smart and funny. Well, mostly. Sometimes I’m petty and cantankerous, though I can’t think of when just now. But I’ve no trouble remembering how obsessive he can be. Like, he just discovered a new one: he thinks our dishwasher door needs to remain ajar at all times except when in use because it allows it to dry out and prevent sour smells. Uh. Don’t they become bone-dry during the DRY-ing cycle? Okay, I admit occasionally there’s a mysterious build-up of stinky gray matter in the bottom that looks like alien guts are coming or going.

I’m thankful for a year where the disparate essentials of life – from suffering and trouble to celebrations of joy and quietness all work together to push us farther down the road to maturity.