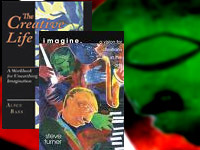 People with renewed minds are not to approach life as if sensually numbed.
~Steve Turner

Christians must discover a renewed vision for the arts, especially the visual arts—a “renewed vision” because the gifts of imagination and vision are a part of the Christian’s birthright.
~ William Dyrness

As evangelical Christians we have tended to relegate art to the very fringe of life. The rest of human life we feel is more important… We have misunderstood the concept of the Lordship of Christ over the whole of man and the whole of the universe and have not taken to us the riches that the Bible gives us for ourselves, for our lives and for our culture.
~Francis Schaeffer

Imagine
I first discovered Steve Turner in the 70s through his poetry. At the time I was not given to reading much poetry, but his poems caught my attention: vibrant and surprising, Christian without being necessarily “religious,” and profoundly subversive. “Why don’t we try loving each other?” asks the opening line of “Humanist’s Love Poem.” “Feeling this molecular urge for you / we must chemically react if we can.” This was apologetics with a sense of humor, taking the Naturalism of the day with enough seriousness to expose its fatal flaw. Turner celebrated love and the glory of God’s good world, now so broken, and reflected on it in ways that prompted response. “Natural History,” for example, is a meditation on mortality and meaning that was worthy of Ecclesiastes’ Teacher. “Most of us,” it begins, “do not go down / in history, / we just go down…”

Nurtured at L’Abri as a young man, Turner’s pilgrimage has taken him into the world of popular art where he has sought to live with biblical integrity as a writer and poet. Along with several collections of poetry, he has written books on Eric Clapton, U2, and Van Morrison. Over the years I have been grateful for Steve Turner, returning again and again to poems that say so much so well. His faithful creativity has enriched my imagination, and increased my love of God.

Now, with a maturity born of a lifetime seeking to read the world as he reads the Word, Turner has written a book designed to help us be discerning in a world where art and culture are essential because people are made in the image of the Creator. But please ignore the subtitle. A Vision for Christians in the Arts suggests you can safely ignore this book if you aren’t an artist, but that would be an error. Please read it if you are an artist, and if you aren’t.

“The best art,” Turner argues, “doesn’t tell people what to believe but enables them, for a short time, to see things differently, and the Christian can enable people to momentarily glimpse the world through eyes that have been touched by Christ.” That challenge applies to more than artists, of course, but may God raise up a generation of artists among his people who can lead the way. Besides helping us see art and culture in terms of the biblical story of Creation, Fall, and Redemption, Turner addresses the common concerns and misconceptions that so many believers have about art. Objections are treated with integrity, and Turner’s answers reveal his commitment to biblical orthodoxy. Imagine is compelling because it is rooted in the Scriptures, because it is written by someone who loves words, and because it is the product of a life lived out on the intersection of Christian faith and a post-Christian culture. Lively and practical, Imagine shows us what it means to think and live faithfully in relation to art, pop culture, creativity, and the grace of imagination. His illustrations throughout are insightful, and reveal his ability to listen with care to those who may not share his deepest convictions and values. And, as you might guess, his analysis of much of what passes for “Christian” art and music is a thoughtful and much needed corrective.

I recommend Imagine to you highly. Though it doesn’t come with discussion questions, it would be an excellent study for small groups, and is provocative enough to generate discussion on its own.

Visual Faith
I discovered William Dyrness around the same time I discovered Turner, but truth be told, my reaction was quite different. Dyrness is a scholar who has much to teach me, but whose scholarship requires discipline if I am to learn. He studied in Holland with Dr. Rookmaaker, and in 1971 published a thoughtful study of the themes of degradation and grace in the art of the painter Georges Rouault. L’Abri had taught me that, as Rookmaaker was fond of saying, art needs no justification and is included in the cultural mandate which defines biblical faithfulness. So I was eager to learn about art. Rouault: A Vision of Suffering and Salvation was to say the least, a very stretching read, but it also thrilled me as an example of a Christian scholar engaging the world of modern art in a way that glorifies Christ.

But then over time, a problem revealed itself—a rather Protestant problem. Evangelicals believe that the cultural mandate of Genesis calls us to faithfulness in the arts, but most also believe that art, especially visual art must never invade our worship. In this they are following the Reformers who rid the Church of images, seeing them as idolatrous, a hindrance to the true worship of God. I remember Francis Schaeffer saying that he regretted that the Reformers did not preserve all that art instead of destroying it, but at the time they didn’t see it as something worth preserving. Since then the Protestant church has tended to be devoid of visual art. This has always struck me as very unfortunate, and though I have understood the arguments behind it, they have always seemed to me to be contrary to Reformed theology. Christianity is an embodied faith, a fact underscored supremely by the Incarnation, and though visual art can like any good gift become a snare in this fallen world, that is no reason to conclude that true worship can not embrace both word and image.

Now, in Visual Faith: Art, Theology, and Worship in Dialogue, Dr. Dyrness restores art to its rightful biblical place in the church in a carefully argued and balanced work of theology.

“Contrary to what our tradition may have taught us,” Dyrness writes, “I believe that making beautiful forms is theologically connected to our call both to listen and respond to God in prayer, praise, and sacrament.” He does not mean by this that the art should be limited to religious themes appropriate for corporate worship, but he makes a compelling argument that this should be part of the recovery of a biblical view of art for Protestants. He is also culturally sensitive and understands that evangelism in a postmodern world must include a concern for image and beauty. “It is true that the Protestant imagination has been nourished uniquely by the spoken and written Word, and therefore, we tend to think that everyone must be spiritually and morally nourished in the way that we (and our forebears) have been. Surely these verbal means are of critical importance. But our children and their friends have been raised in a different world; they are often uninterested in our traditional word-centered media. Instead, they are looking for a new imaginative vision of life and reality, one they can see and feel, as well as understand.”

Visual Faith is an important work of theology, correcting an unfortunate error which has plagued the evangelical Protestant community for far too long. It does so not by introducing a new idea, but by calling us back to the Scriptures.

I recommend Visual Faith to you. Please read it and give a copy to every elder in your church.

Postscript: studies & exercises
The Creative Life: A Workbook for Unearthing the Christian Imagination is a Bible study guide designed to provoke reflection on creativity and imagination from a Christian perspective. Some will want to use it for small group study, and it comes complete with a leader’s guide for that purpose. And some will want to extract some of the Bible studies and exercises as a supplement to studying Imagine. Either way, it’s a useful resource.