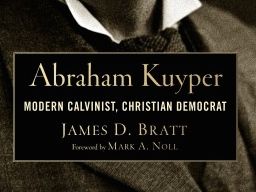 A Dutchman worth knowing
The first I ever heard of Abraham Kuyper (1837-1920), at least far as I can remember, was in something he said: “There is not one square inch of created reality over which Christ as Lord does not claim, ‘This is mine.’” I learned later that Kuyper didn’t actually say that, exactly. What he actually said was, “Oh, no single piece of our mental world is to be hermetically sealed off from the rest, and there is not a square inch in the whole domain of our human existence over which Christ, who is Sovereign over all, does not cry: ‘Mine!’” (I like the version I heard better.) In any case, having grown up believing that some parts of life (the “spiritual”) are hermetically sealed off from the rest of existence (like art and culture), Kuyper’s statement was revolutionary. Before long Kuyper’s writings and thinking was shaping my view of things, a process that continues to this day.

The book I am recommending here, Abraham Kuyper: Modern Calvinist, Christian Democrat by James Bratt is very worth reading but shouldn’t be read by everyone. Please don’t worry much about whether you are someone who should read it. If you should, you’ll know. You’ll be someone who has been deeply influenced by Kuyper, who has read at least some of his books, and who will want to read what may very well prove to be the definitive biography of the man. If you don’t fit this category, skip this book. Instead read Abraham Kuyper: A Short and Personal Introduction (note the word “short”—Bratt’s book is not short) by Richard Mouw and Kuyper’s Lectures on Calvinism. But do learn about Abraham Kuyper—discerning Christians need to recover his understanding of faith, Scripture, culture, and politics instead of remaining captive to the various political and economic ideologies of our world that are in reality forms of idolatry.

Bratt clearly loves his subject and seeks to honor him but does not make the mistake of writing a hagiography. “Abraham Kuyper was a great man,” he says, “but not a nice one” (p. xxii). I would argue that we need to learn from Kuyper, but we must not simply imitate him. For one thing, he lived and worked at the beginning of the 20th century when modernism was dominant while we live at the dawn of a new century when increasing pluralism, exclusive secularism, and an assumption of disbelief shape the intellectual background of our culture. And though Kuyper’s list of accomplishments—minister, founder of the Free University of Amsterdam, journalist, professor of theology, member of Parliament, Prime Minister, author—are impressive, his life was marred by controversy and more than one serious physical and emotional breakdown from being persistently hyper-active.

Abraham Kuyper: Modern Calvinist, Christian Democrat reminds me that what I cherish most in Kuyper is his unshakable conviction that the Christian worldview, firmly grounded in the revelation of Scripture provides the necessary and sufficient foundation to chart a course for human flourishing in our broken world. His creativity in thinking through the issues of his day, his insistence that his thinking always reflect the reality of Christ’s Lordship over all, and his unwavering commitment to fleshing out the truth in the ordinary things of life are his legacy—and one that I hope might perhaps be seen, even if dimly, in me.