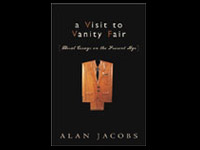 As periodicals pass over my desk I am always on the lookout for articles from the pen of Alan Jacobs. Professor of English at Wheaton College, his essays are stimulating, wise, often provocative, and always informed by a mind which has been shaped by the truth of Scripture. Now in A Visit to Vanity Fair, a collection of fifteen of his essays have been published in book form. Jacobs is well-read, and his interests are delightfully broad—there are pieces here on Bob Dylan, Harry Potter, friendship, children’s Bibles, C. S. Lewis, miracles, preaching, and much more.

The essays in A Visit to Vanity Fair can be read in any order, and none are so long that even in the press of busyness we shouldn’t be able to carve out the time. And whether Jacobs is reflecting on the work of a poet (as he does in “Donald Davie”) or reflecting on how to read the Bible (as in “Dowsing in Scripture”) he writes with clarity, with insight, and with an obvious love for God.

Excerpts:
My son Wesley has two so-called children’s Bibles. One he cares little for, perhaps because his burgeoning aesthetic sense rebels against the unprofessional quality of the illustrations, which are by other children. The second he likes a lot, referring to it as ‘my Bible’—a locution he doesn’t use for any of his other books, which indicates that he has picked up on the distinctive way that Christian adults talk about Bibles. When he asks me to read his Bible to him, he always wants to begin with the story of Noah and the ark, which is just fine, because the death of a world of people and animals is not mentioned in this version. But after Noah’s rainbow appears, the mood of the text darkens rather considerably. Of course, the most gruesome tales are left out: we have no crayonishly colorful depictions of Jael nailing Sisera’s head to the ground with a tent spike, or of Elisha unleashing two ornery she-bears on a pack of smart-mouthed punks.

Still, the list is a rather dismal one. Here is Isaac narrowly avoiding being slain on an altar by his father, followed soon thereafter by the various lies and deceptions of Jacob; here are Jacob’s sons selling their brother Joseph into slavery; here are the plagues visited upon Egypt, culminating in the death of Pharaoh’s young son. I find myself trying to skip forward to the less unpleasant parts, like the manna in the wilderness, or Samuel’s anointing of David, or even David’s slaying of Goliath. Unfortunately, Wesley is the sort of child who likes to go through a book from beginning—or at least from the point at which he chooses to start—to end, so we can end up wrestling ludicrously over control of the pages. How can such disturbing tales (I ask as I try to pry Wesley’s little fingers loose from an account of Samson’s massacre of the Philistine army) contribute to my son’s moral and spiritual development?
(“A Bible Fit for Children,” pp. 35-36.)

[C. S. Lewis] did not think his books would be read for long after his death: he expected that history would present new challenges for the Christian church, which new generations of Christian writers would have to address in their own way, not by reinventing Christian doctrine but by creatively representing that same plain, central, inexhaustible Christianity to which he devoted his ability, energy, and delight.

We should therefore ask whether those Christians who honored Lewis in his centenary year—and it was fitting to so honor him—always did so in the best way. Many years ago V. S. Naipaul noted a particularity of the Indian attitude toward Gandhi: everywhere in India Gandhi was venerated as a saint, but the social conditions against which he railed for so long remained unchanged. It would be sad if the same fate were to befall Lewis, if people were to revere his achievement so much that they fail to devote the quality of attention to the challenges of their time that he devoted to the challenges of his. This is a real temptation for those of us who love Lewis, because to read his books is to dwell in an atmosphere of moral and spiritual health that offers dramatic relief from the confusions and frustrations, petty and grand, of modern life. But Lewis himself always strove to encounter and interpret the world in which he lived. His admirers should remember that the achievements of the truly great are best honored not by the one who praises their work but by the one who follows their example.
(“Lewis at 100,” pp. 124-125.)