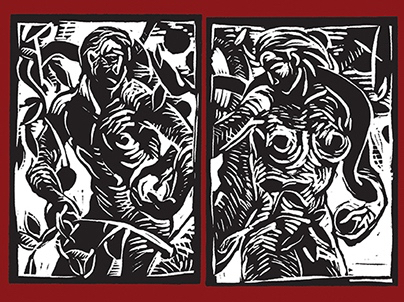 I’ve plagiarized the title for this review—it’s the subtitle of a new book from Square Halo Books: Revealed: A Storybook Bible for Grown-ups. I have more to say about it, but here is my conclusion: if you don’t order a copy you are missing out on a delightful and beautiful book that will deepen and enrich you, spiritually and imaginatively, while providing a lovely opportunity to strike a blow against the deadly hurriedness of modern life.

The format of Revealed is simple and effective, adding to the attractiveness of the large-size (9” x 10”) volume. Each two-page spread follows the same layout. The left page includes two pieces of text, a passage of scripture and a brief explanation of or reflection on the artwork that appears as a full-page illustration on the right page. Thus, Revealed can be profitably read from beginning to end (the texts follow the biblical narrative), or opened to any two-page spread that can be enjoyed as an individual meditation. Either way, the reader will have all they need to reflect on a scriptural text and a piece of serious art that is based on it.

The art in Revealed includes woodcuts, linocuts, etchings, engravings, lithographs, drypoint, monoprints, and an occasional collage. All these formats are designed to work well in black and white, so the lack of color in Revealed, rather than being detrimental, allows greater appreciation of these often underappreciated art forms. Some of the artwork was made specifically for the book and most were created recently (by contemporary artists such as Edwards Knippers and Ned Bustard), while a few were created in previous centuries (by artists including Rembrandt, Albrecht Durer and William Blake). Drawing on the work of a number of artists allows us to be exposed to a rich variety of styles and thus deepen our appreciation of diverse approaches that span the 15th to the 21st centuries. Some are delicate with fine lines, intricate detail and realistic while others are bold, stark, minimal and expressionistic. All are worthy of unhurried reflection.

Revealed does not include all of scripture, just 122 carefully chosen passages from Genesis to Revelation. In making his choice of biblical texts, Bustard followed clearly defined criteria: he chose passages we normally tend to skim over or skip entirely because they make us uncomfortable. If you’ve read the Bible, you’ll have noticed them: stories of mayhem, cruelty, violence, abuse, rape, murder, incest, betrayal, stupidity, implausible miracles and drunkenness. “Scripture does not flinch when confronted with evil or beauty,” Bustard writes.

Every sphere of life is addressed by God’s Word, including the unpresentable parts. God is God over mountains and valleys, joys and sorrows, beautiful births and violent deaths, the marriage bed and the dark alley. If we don’t depict the “naughty bits,” the great Story of the Bible becomes bland and weak. It loses not only its power but also its veracity, forced to abide in a half life of half truths.

Christ came to save the lost… not the misplaced. A book that does not address the deep depravities and gut-wrenching sorrows of the human condition is no good to any of us, believer or unbeliever alike.

Bustard is making a strong claim here. He is claiming, implicitly, that we should not be surprised that scripture includes passages that make us uncomfortable. Rather, this is precisely what we should expect if it is God’s revelation of himself to a fallen humanity. And Bustard is claiming, explicitly, that we ignore the discomforting passages at our peril. Doing so weakens the biblical witness for unbelievers and cuts us off from texts that according to St Paul, are meant for our growth (see 2 Timothy 3:16). Bustard does not simply take the scriptures seriously he takes all the scriptures seriously, and challenges all of us who name the Name of Christ to do the same.

In a brief review of Revealed for the journal First Things, novelist J. Mark Bertrand says this about it:
I recommend it for the artists, skeptics, and moralists in your life—the artists because they’ll enjoy it, the skeptics and moralists because they’ll benefit from the challenge. Revealed takes a warts-and-all approach to the Bible, illuminating the difficult passages we sometimes want to forget, shaking the moralist’s idea of Scripture as a safe inspirational guidebook and in the same breath contradicting the skeptic’s belief that Bible cannot comprehend the truth about the world in all its messiness.

Thomas Jefferson is famous for producing his own version of the Bible, from which he snipped out all the passages that he found incredible. Is it possible that we have inadvertently followed Jefferson’s example, not by physically cutting out texts but by quietly ignoring them?

A piece of art based on a passage of scripture is, in essence, an interpretation of the passage. Seen in this light, the artwork performs a similar function in Revealed as a meditation on the text in a devotional or an exposition in a commentary, while adding the element of art and beauty. Hopefully, in each case, the interpretation serves both to give insight into the scripture and to prompt further reflection, study and meditation. It both informs and invites, deepening our engagement with the text. Good visual art can act as a portal, an imaginative way into a story so that we come to indwell it, perhaps in surprising ways, rather than merely assess it logically from the outside.

There is another reason to commend Revealed, a reason that is simultaneously biblical and countercultural. It is a book designed not simply to be read through and placed on a shelf, but a book to be lingered over and savored during times of unhurried meditation. We need such books in our hurried and busy world. Revealed may be a discomfiting book, but it is also a restful one. Like all that is truly valuable in life, scripture and art require us to slow down, to look and observe and then observe some more, and to wait quietly. These are disciplines of the wise, and almost the entire fabric of life in advanced modernity militates against them.

The Christian artist need not produce works based on texts of scripture, because Christ is Lord of all. Still, when Christian artists do produce such works it can be a rich gift to the church and to the world. As an artist Bustard has curated the art in Revealed with a keen eye, so that it fits within both the high standards of historic biblical orthodoxy and of good art.
We recommend Revealed to you.