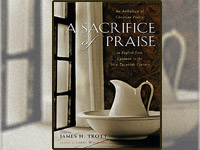 When Ransom Fellowship sponsors Bible studies and seminars, we always include what we call “discernment discussions,” sessions in which the group discusses a short story, movie, or article. The idea is to link what we believe with what we do, to bring what we are learning in the Scriptures into tension with our culture. To read the world, in other words, as we read the Word.

Occasionally I ask members to bring poems to read which we can discuss. Any poem will do, as long as it’s not a Psalm, as long as it is a published work that speaks to them. This assignment, for some reason, is always greeted with groans (especially from the men), and the complaint that they can’t do it because they haven’t read poetry in years. All the more reason to read it now, I say.

Poetry is an art form far too precious to be ignored. Dig out the old poetry anthology from college and the books of poetry collecting dust, spend an evening leisurely going through them, and be prepared to read one poem to the group. Interestingly, the poetry evenings always turn out to be deeply moving (even for the men, by the way). And so far, at least, no member has ever brought merely one poem to share with the group, but several.

Yet most Christians tend to slight poetry. For one thing, we tend to read the Psalms not as poetry, but as teaching which happens to be in poetic form. So we don’t relish it as poetry, or interpret it as poetry, but rather treat it as if its form did not matter. But it does. Many of us also slight poetry because we are busy, and so imagine we haven’t the time. Strange idea. If you think about it, an easier case could be made for the proposition that poetry becomes more essential as we become increasingly busy.

One way to immerse yourself in poetry is with a good anthology. One anthology that all Christians should consider adding to their libraries is A Sacrifice of Praise edited by James Trott. A poet himself, Trott decided to begin the collection “to know how the Christian poet should write and speak to his own ‘tribe’ in his own ‘tongue’… We who speak English have thirteen centuries of Christian poetry behind us. Christian poetry in English is a deep and broad stream of praise, frequently poured out by men and women who died for the faith in a context of persecution… This stream or tradition of Christian poetry includes every genre, form and style from private meditations and psalms to great public works of literature on epic scales.”

A Sacrifice of Praise is arranged chronologically in nine chapters, each period, genre, and poet introduced by Trott in a way that gives us a context for the poems to follow. Footnotes are also provided to help interpret Old English words and phrases.

The earliest Christian poet who wrote in English was an illiterate herdsman who lived from 658-680. Caedmon, the story goes, escaped from a party at which each person was to tell a story or sing a song, because he could do neither. That night, alone, he had a vision during which he found himself praising God in verse.

It is meet that we worship
the Warden of heaven,
The might of the Maker,
His purpose of mind,
The Glory-Father’s work
when of all His wonders
Eternal God
made a beginning.

Entering a monastery, Caedmon turned the Scriptures he heard read aloud into verse. The poem he received in the vision, the only one clearly attributable to him, has been remembered through the centuries simply as “Caedmon’s Hymn.”

My favorite Christian poets are included in A Sacrifice of Praise (though not, of course, all my favorite poems). Such as Gerard Manley Hopkins (1844-1889) from “Pied Beauty:”

Glory be to God for dappled things—
For skies of couple-colour as a brindled cow;
For rose-moles all in stipple upon trout that swim…

And Christina Georgina Rossetti (1830-1894), sister of painter Dante Gabriel and model for a number of the Pre-Raphaelite artists, from “An Emerald is as Green as Grass:”

An emerald is as green as grass;
A ruby red as blood;
A sapphire shines as blue as heaven;
A flint lies in the mud.

A diamond is a brilliant stone,
To catch the world’s desire;
An opal holds a fiery spark;
But a flint holds fire.

And the seventeenth century Anglican cleric John Donne (1572-1631), from “A Hymn to God the Father:”

I don’t care for all the entries in A Sacrifice of Praise, of course, but such is the nature of anthologies. In a few cases I would even have argued some of the pieces be omitted to make way for better poems. On the other hand, I have made pleasant discoveries while browsing the collection. Been introduced to new poets of whom I wish to read more, and found poems which have fired my imagination. One discovery was the appropriately shaped poem by George Herbert (1593-1633) named “Easter Wings:”

Lord, who createdst man in wealth and store,
Though foolishly he lost the same,
Decaying more and more,
Till he became
Most poore:
With thee
O let me rise
As larks, harmoniously,
And sing this day thy victories:
Then shall the fall further the flight in me…

Or, if like me you have trouble remembering the Commandments, the clever versification by Ralph Erskine (1685-1752):

1. No God but me thou shalt adore.
2. No image frame to bow before.
3. My holy name take not in vain.
4. My sacred Sabbath don’t profane.
5. To parents render due respect.
6. All murder shun, and malice check.
7. From filth and whoredom base abstain.
8. From theft and all unlawful gain.
9. False witness flee, and slandering spite;
10. Nor covet what’s thy neighbor’s right.

And most of all, I am delighted to be introduced to the poetry of Phillis Wheatley, born in Africa in 1753, and shipped to America as a slave at the age of seven. Sold in Boston to a tailor named John Wheatley, she was educated by his wife who quickly realized her abilities and made study her chief duty. Phillis Wheatley went on to learn Latin and Greek, as well as English, and when she was 18 traveled to London, where she published her first book of poetry. Later freed, she married another freed slave, John Peters. She died at the age of 31. Here’s an excerpt from “Thoughts on the Works of Providence:”

As reason’s pow’rs by day our God disclose,
So we may trace him in the night’s repose:
Say what is sleep? and dreams how passing strange!
When action ceases, and ideas range
Licentious and unbounded o’er the plains,
Where Fancy’s queen in giddy triumph reigns,
Hear in soft strains the dreaming lover sigh
To a kind fair, or rave in jealousy;
On pleasure now, and now on vengeance bent,
The lab’ring passions struggle for a vent.
What pow’r, O man! thy reason then restores,
So long suspended in nocturnal hours?
What secret hand returns the mental train.
And gives improv’d thine active pow’rs again?
From thee, O man, what gratitude should rise
And, when from balmy sleep thou op’st thine eyes,
Let thy first thoughts be praises to the skies.
How merciful our God who thus imparts
O’erflowing tides of joy to human hearts
When wants and woes might be our righteous lot,
Our God forgetting, by our God forgot!

A Sacrifice of Praise is a good introduction to the great stream of Christian poetry which is part of the heritage of the people of God. “And nothing can contain,” novelist Larry Woiwode notes in the Foreword, “the outpouring of poetry that carries us on a current that is our true source of power, ordained by hands other than ours from before the beginning of time, and that onrushing stream is the tradition pouring through the chapters of this book; it is pouring out of centuries past and will keep pouring in thunderous collusion to His glory into centuries to come.”