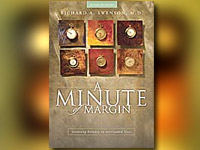 Richard Swenson is a medical doctor who left his practice in order to research, write, and lecture on stress, overload, and margin. “When on the unsaturated side of our limits, we can be open and expansive,” Swenson says. “We can say Yes to new opportunities, activities, and obligations. But on the saturated side of our limits, the rules of the game totally change. We cannot say Yes to something until we say No to something equally time consuming or energy draining.” In A Minute of Margin he pens 180 brief daily reflections to help us consider how best to live as beings who were created to serve God as finite creatures. As people with limits, and so who need to recognize and honor our God-given limits. As persons made to live in time, in a weekly cycle of work and rest, building in appropriate margin so we are not overloaded, taking on what is not truly ours and short-changing our calling.

Excerpt from A Minute of Margin:

Reflection 1 [Priorities] ONE SEPTEMBER MORNING ON THE 103RD FLOOR

If you attempt to talk with a dying man about sports or business, he is no longer interested. He now sees other things as more important. People who are dying recognize what we often forget, that we are standing on the brink of another world.
William Law, Eighteenth-century British Theologian

The skies were partly cloudy, the temperature was 68 degrees, the wind was out of the west at 10 miles per hour. A beautiful day. At 8:45 A.M., people working on the 103rd floor were pouring their morning coffee, straightening their desks, reviewing their Tuesday appointments, bantering with office mates, glancing at the harbor…

One minute later, none of that mattered. Twenty floors below, a 757 transected the building, leaving the 103rd cut off, trapped, hopeless. But not yet dead.

When you have ten minutes to live, what are your thoughts? What is important in the last seconds? As a tribute to those nameless faces staring down at us from the smoky inferno, can we stop what we are doing long enough to listen to them? Seeing death from this perspective is not morbid: on the contrary, it can help us see life.

Those who found phones called—not their stockbrokers to check the latest ticker, not their hairstylists to cancel the afternoon’s appointment, not even their insurance agents to check coverage levels. They called spouses to say “ I love you” one last time, children to say “You are precious” one last time, parents to say “Thank you” one last time. Through tears they called best friends, neighbors, pastors and priests and rabbis. “I just want you to know what you mean to me.” And surely those standing on the brink of another world thought of God—of truth and eternity, judgment and redemption, grace and the gospel.

Imminent death has a commanding power to straighten life’s priorities with a jolt. At such dramatic moments, people suddenly realize that priorities matter.

Tragically, however, chronic overloading obscures this truth. How we live influences how we die, and misplaced busyness leads to terminal regrets. If we don’t move to establish and then guard that which matters most, the breathless pace of daily overload will blind us to eternal priorities, until one day we too stand at such a window and look down. Perhaps with regret.

L Slow the pace of living until you again remember that day. If that were you on the 103rd floor, what would have been important? Live it. Don’t hide behind the excuse of overload. Daily make space in your life for the things that matter most.

The afternoon knows what the morning never dreamed. – Swedish Proverb