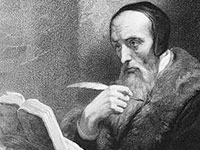 Last year a friend heard that I was re-reading John Calvin’s Institutes, and wondered why I would take the time. He said it was a “very confusing” book.

I had never heard that criticism of the Institutes before. The main complaint I’ve heard is that it’s too long. It is long, I grant you that; my copy tops out at 1800 pages. But if I can press the point a little, who says that’s too long? I want to be careful here, but could it be that just maybe your attention span is too short? A lot of good books are long: think of The Brothers K by David James Duncan. True, The Brothers K is a novel. And true, most people have limited time for reading, which means few choose to fill those moments with books of serious theology. But all that says more about readers and their expectations and priorities than about whether Calvin’s Institutes are too long. Long isn’t bad; never having time for serious reading is.

On the other hand, I can think of at least five reasons why some Christians might find the Institutes a bit confusing. For one thing, many Christians have picked up a whole host of mistaken notions about what Calvinism is actually all about. So then they read John Calvin and wonder what’s going on. It’s a good confusion believe me.

A second reason some readers might find Calvin’s Institutes confusing is that Calvin was a man of his time writing to the people of his day. This means he engages issues that don’t challenge us, refutes some ideas we don’t care about, and does both in a style that is foreign to us. Our struggles are elsewhere, and trying to enter those historical debates can be confusing (except for those of us who like that sort of thing). And the style of the day for such things in the 16th century was unfortunate in many ways: too much name calling and too much slanderous prose. It wasn’t good then, and isn’t good today.

Third, evangelicals have been trained to like neat answers, not mystery. But Calvin’s primary commitment is to Scripture, which means he submits to what it teaches even when that requires bowing before the Lord and acknowledging that there is much we simply can not comprehend. Mystery doesn’t mean accepting what is irrational, but it does mean accepting the limits of our rationality. Calvin’s the sort of theologian who is willing to let God be God, and to bow in worship instead of engaging in what he called “speculation.” There’s a lot about God that we can’t understand; we are finite, after all. And a common feeling in the face of mystery is confusion.

The fourth reason that some might find the Institutes confusing is that Calvin corrects some of the unbiblical ideas and doctrines that are very popular in evangelical circles today. Contrary, for example, to the mistaken notion that the return of Christ will produce the annihilation of creation, Calvin correctly insisted that the Bible promises a renewed creation and resurrected bodies. Cornelis Venema sums up Calvin’s thought this way: “Redemption restores what sin has corrupted and deformed, but it does not displace what God created good.” Being corrected from Scripture is a grace, even at the expense of feeling a bit confused in the process.

And finally, most of us have little margin—far too little margin—in our lives. It’s hard to focus on extended works of serious reflection, to maintain our attention over the long haul. In his Institutes, Calvin isn’t producing a series of talks each of which can be digested separately but a single explanation of the Christian faith where all the parts fit together into one coherent whole. Most of us, sadly, don’t hold that kind of faith.

So, no, I would say Calvin’s Institutes are not confusing. They are rather, accessible to the thoughtful reader, the kind of bracing exposition of biblical teaching that is needed in every generation. Calvin’s was a scholar’s mind shaped by a pastor’s heart, so his theology led not to intellectual vanity but to humble worship, and a deep concern for the Christian’s relationship with God and Christ’s church. J. I. Packer, as usual, gets it right:

The readability of the Institutio [the name in Latin], considering its size, is remarkable. Calvin’s pacing is steady and urgent through out. Just about every sentence contains concentrated thought expressed in elegant, fast moving, colorful, punchy Latin rhetoric. (No English translation fully matches Calvin’s Latin; that of the Elizabethan, Thomas Norton, perhaps gets closest; Beveridge gives us Calvin’s feistiness but not always his precision; Battles gives us the precision but not always the punchiness, and fleetness of foot; Allen is smooth and clear, but low-key.) Calvin’s combative streak and lawyer’s training impelled him to argue his opponents under the table, as we might put it, and sixteenth-century controversial manners, or lack of them, led him to bad-mouth his opponents personally as he argued against their ideas, and the 1559 Institutio is disfigured by some over-arguings and satirical brutalities. All in all, however, the book remains a literary masterpiece, a triumph of the didactic writer’s art, and when read seriously it makes a very winning impact on the mind and heart, even today.

Nor is that all…

Calvin’s Institutio is one of the wonders of the theological world, too—that is, the world of truth, faithfulness, and coherence in the mind regarding God; of combat, regrettable but inescapable, with intellectual insufficiency and error in believers and unbelievers alike; and of vision, valuation, and vindication of God as he presents himself through his Word to our fallen and disordered minds. Refusing to affirm anything that does not echo explicit biblical teaching, and refusing too to separate things God has joined, Calvin spells out Christ-centered faith and life with a sure touch…

Great theology, like the Bible in which all great theology is soaked, is essentially transhistorical and transcultural, and interprets us, joltingly sometimes, as we seek to interpret it. The 1559 Institutio is great theology, and it is uncanny how often, as we read and re-read it, we come across passages that seem to speak directly across the centuries to our own hearts and our own present day theological debates. You never seem to get to the book’s bottom; it keeps opening up as a veritable treasure trove of biblical wisdom on all the main themes of the Christian faith. Do you, I wonder, know what I am talking about? Dig into the Institutio, and you soon will.

In the 16th century authors’ favored long book titles, and Calvin was no exception. When the final, 1559 edition of his treatise was published, it was titled, The Institute of the Christian Religion containing almost the whole Sum of Piety and whatever it is necessary to know in the Doctrine of Salvation. Calvin’s use of the term “Institute” was common in his day; it simply meant “Instruction in” or a “Manual of” the Christian faith.

Over the years Calvin kept revising the Institutes, publishing five editions in all. He did not change the content or his understanding of doctrine, but rearranged the order of the topics he covered and added more detail. If you trace the changes he made it’s clear the editing arose from his pastor’s heart—he was concerned to present his overview of the gospel in a way designed to help lay believers best learn. Some of the changes also reflect his ongoing study of the Scriptures in the intervening years. And some reflect the challenges to orthodox belief that were raised during the period of the Reformation when he was writing.

My re-reading of Calvin’s Institutes was especially memorable because I had a guide. Dr. David Calhoun, a gentle godly pastor and professor at Covenant Seminary walked with me through it, summarizing, explaining, and guiding my understanding. It was one of the finest graduate courses I have taken.

So, though I don’t think The Institutes is confusing, I agree that having a guide is very helpful. And I know of two that I would recommend for you.

Worldwide Classroom
First, you can take the same course I did, “Calvin’s Institutes”—without the assignments and tuition. The complete lectures and syllabus are available free on Covenant’s web site under the link, “Worldwide Classroom.”

If you have the time, I warmly recommend the class. It’s superb. You’ll be enriched being under Dr. Calhoun’s instruction.

Theological Guide
And second, consider using A Theological Guide to Calvin’s Institutes as your guide. In it Reformed scholars (Dr Calhoun is one) provide 18 essays in which they summarize and explain the Institutes section by section. Two other essays are also included, one setting the historical context in which Calvin wrote and taught, and the other is a bibliography on Calvin so you can read even more (!).