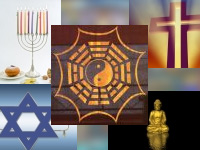 Living in a pluralistic culture, as we do, does not mean that we live among unbelievers; it means we live among people who believe in things other than Christianity. And since secularism has been found wanting, many are adopting a variety of spiritualities and religions. This means, in turn, that we must expect to find ourselves intersecting with our neighbor’s religious convictions and practices—not just in the realm of ideas but in practice. This is what the first-century church faced, and is why the New Testament writers addressed the issue as to whether Christians should eat food that had been offered to idols. The only way that we will escape such intersections in a pluralistic world is if we find ways, intentionally or inadvertently, to isolate ourselves from our neighbors and to withdraw from our culture. And we dare not allow that to occur since we are called to follow Christ into the world.

Now, if the situation we face involves eating meat offered to idols, we can locate specific passages of Scripture which address that issue. On the other hand, often the situation we face isn’t specifically addressed by any text, and so we will need to be discerning. By discernment I mean an ability, by God’s grace, to creatively chart a godly path through the maze of choices and options that confront us. An ability to engage our pluralistic world thoughtfully, without compromising or withdrawing, bringing the truth of God’s word to bear intentionally on every aspect of life and culture.

Often the situation arises suddenly, as in the following story (which is loosely based on an actual incident).

Should we get blessed?

A Christian professor taught a continuing education course in New Mexico. He is an older experienced teacher, committed to his vocation, a thoughtful, creative educator. His course was well received, and the participants looked forward to each class. One of the students was a bright, eager young Navajo woman who, though educated at a university far from her home, had returned to teach at a school on the reservation. She is committed to her tribe, and culture, speaks Navajo fluently, and is part of a growing number of Native American young adults who are deeply interested in the traditional beliefs, religion, and rituals of her people. She was a good student, and expressed her gratitude to the professor as the second to the last class ended. With great respect she thanked him for teaching the course, and told him some of what she had learned as a result of taking it. She said he had “blessed” her—her choice of words—and being grateful, she wanted to bless him in return. So, at the end of the final class she would like to perform a traditional Navajo blessing over him, invoking the spirits of her ancestors and the spirit of the land. It would only take a few minutes, she said, but she would be honored to bless him, since he had blessed her.

The situation raises questions that discerning Christians will be eager to address.

1. How is the growing religious pluralism in society most obvious to you? In what ways does it impact you?

2. What similar situations have you faced personally in our religiously pluralistic culture? How did you respond to them? Why? How satisfied are you with your response? Did you feel prepared to be discerning when the situation first presented itself? Why or why not? If you have never faced such issues personally, why do you think you have been spared?

3. Since it seems clear situations like this will likely increase as time goes by, why don’t Christians discuss them together ahead of time? Why are such discussions often so emotionally charged? To what extent is agreement about such things a measure of spiritual maturity or biblical fidelity? Why? What are the implications of Romans 14 in this regard?

4. Discuss the case study. What would you have done, were you the professor? Why? What texts and principles from Scripture would you identify to justify your conclusion?

5. Let’s assume the professor allows the blessing to occur. Discuss the reaction of a fellow believer who criticizes the professor, claiming that he has intentionally been involved either in the worship of a false god or in an invocation of demonic forces. Worse, he did this in front of other students, which certainly ruined his witness. He should have refused to participate, just as Daniel’s three friends refused to bow before Nebuchadnezzar’s gold image (see Daniel 3). Also, since it is unlikely that a Christian would have been allowed to give a biblical blessing in the class, he should have suggested that the Navajo student’s offer, though thoughtful and kind, was inappropriate in such a setting.

6. Is it biblically necessary that all Christians respond identically in this situation? Why or why not?

I am grateful to Bryan Charlton who told me the basic facts around which I wrote this discernment exercise.