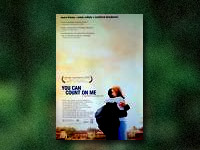 Some movies settle for being “light entertainment;” others ask profound questions about “life, the universe, and everything” from the first frame. We seem to live in a time when light entertainment is defined by the grotesque and repulsive (cf. There’s Something About Mary or Me, Myself and Irene), but the movie industry cannot give the viewing public enough of it nevertheless. On the other hand, movies with depth are as common as snowstorms on a summer’s day in Florida. One tires of waiting for them and even when they arrive, the films are often pretentious and shallow since they build on the uncertain foundations of humanism, absurdism or both.

Just when you are ready to throw in the towel, a movie comes along that is both funny and poignant, reflective and enjoyable. You Can Count on Me is just such a film.

Written, directed and even acted in by Kenneth Lonergan, Count is built around the brief visit of a rootless, undisciplined twenty-something to the homestead where his sister and her son live in upstate New York. Orphaned in childhood, Samantha and Terry Prescott have a complicated but deep love for each other that forms the heart of the movie, and a subplot of the growing relationship between Terry and Samantha’s son Rudy movingly mirrors that love, while developing its own themes.

Count could have been the sappy telling of another “relationship” story where two lonely, dysfunctional characters find true happiness in the end by learning to live with each other and triumphing over the world together. But none of that for Lonergan. Sammy and Terry will not so easily give up their stubborn, independent, coping mechanisms, hard won in starkly different ways, and the film rocks achingly back and forth between their unselfish love and concern for each other and their self-centered adherence to themselves and their contempt for each other’s choices.

Sammy, played by Laura Linney who has been nominated for an Oscar for her performance, is a loan officer at a bank. An avid church-goer, devoted mother, and trustworthy employee, she nevertheless has learned to handle the demons of her pointless life by avoidance, finding the comfort of sex and a cigarette the only means of really relaxing.

Mark Ruffalo plays her brother Terry, a drifter and his sister’s polar opposite. In and out of jail, jobs and even states (he has lived vaguely in the South and in Alaska), Terry stubbornly holds to a philosophy of movement. He avoids anything that even smells of permanence.

If the movie had stayed there, it would have been like too many others since Easy Rider: existential loners find each other and, though they remain in their despair, they at least have each other. Yawn.

But Count does something radically different for this secular age: it introduces the question of God. He is creeping back into film after a long absence; comedies like Keeping the Faith and Dogma and action pictures like Stigma and End of Days are becoming common. But dramas—“real life” pictures as it were—have lagged behind; The Big Kahuna comes to mind, but little else. Perhaps an unbelieving Hollywood doesn’t know how to even begin to write religion, but it is a gap that the movie-going public seems to want closed. Even Bergman’s The Seventh Seal is being shown at a movie club in my hometown, a sure sign both of interest and the lack of substantial films to satisfy that interest.

In three scenes of extraordinary, quiet power, You Can Count On Me portrays many of the questions people really ask of their pastors (and comments that are made to them by those who don’t believe). The questions of God’s existence gently invade the story and force the viewer to ask themselves and the characters: What does matter in life? Where do I find a “still point in a turning world?” Are there answers to the mess I find myself trapped in?

Lonergan was nominated for an Academy Award for his script. Clear, simple editing, direction and camera work also help create an atmosphere of reality in small town America, a quality often missing in Hollywood these days. Even independent, small, relational films are set in exotic climates like the New Mexico of The Tao of Steve for instance. But this movie feels like you and me. It gives us a window into that silent majority out there who really do live lives of quiet desperation as they go about their daily tasks of work, love, eating and praying. And Count offers no pat answers for that despair. As we all know, neither does life.

This review will not go further; you must take a friend and discuss with them whether the responses the movie gives are true, realistic, neither or both. But go at all costs; you won’t find a more challenging film for discussing the big questions of life.

1. What was your initial reaction to the film (music, setting)? Did the filmmaker involve your emotions? What were they, and how did the film provoke them? 2. What are the effects on children of losing parents? How do different siblings respond differently, based on order in family? What can this kind of loss do to someone’s temperament, especially as it forms later in life? 3. What details in the film bring out the personalities of each character? How much can we tell about a person based on such details, and should we even do so? 4. Terry is a model for the person running away from his past—is it wrong to do so? Are there better options? Many of the characters are trying to change who they are-can we change who we are? How? How do we define we you are? 5. Terry says early on, “I’m not really looking for anything; I’m just trying to get on with life.” Do you think he really believes that? Why or why not? Is anyone able to live by this principle? 6. Why do Bob and Sammy have an affair? What do they see in each other that they want? Do you think either of the two is acting purely selfishly? 7. Do you think the affair is justified? Do you think the filmmaker tries to justify it? Why, and how so, or why not? 8. Why doesn’t Sam want to marry Bob? 9. Terry’s faults are easy to see, but what do you see good about Terry? 10. When Sammy approaches her pastor about “fornication,” he responds differently than she hoped. Why does Sammy respond to his answers the way she does? Do you think that people want to be held responsible for their actions? Why or why not? Do you think this pastor is indicative of the state of the church in our culture? How so or why not? The writer and director of the film, Kenneth Lonergan, plays the pastor—is this significant? 11. The pastor asks Terry, “Do you think your life is important?” How would you answer that, and on what basis? 12. Terry says he doesn’t want to believe so he won’t feel guilty; he wants to believe because something is true. Do you agree with Terry’s response? How or how not? Do people believe out of guilt? Do they refuse to believe because of terminology: God, religion, etc.? What other reasons do people have for either believing or not believing that aren’t legitimate? What are legitimate grounds for believing that anything’s true, much less “religion”? 13. Sammy says she gets into bad situations because she feels sorry for people. How do you understand that? What’s the cause of that? How is that mindset both helpful and destructive? 14. When we feel confined by life circumstances, how do we react? What do we do when the people we expect to have answers don’t have them? When the people we think we can count on aren’t there for us? How does that affect the way we treat other people? 15. What do we do if we find that no one’s there for us the way we want them to be? Since no one can be exactly the way we want them to be, not even ourselves, are you content to settle for this? Is there any other option? 16. To what degree do disappointments affect our ability to trust people? What other repercussions do we experience? How do we deal with them? 17. How does Terry’s presence affect Sam’s life? Why? What’s both good and bad about it? How does Rudy affect Terry? Why? Good and bad? 18. Regarding Sammy’s decision to have Terry leave, how do we make decisions regarding our love for people (i.e. how do we prioritize love)? 19. Like Sammy and Terry, who were literally orphaned, increasing numbers of Gen-Xer’s and -Yer’s are growing up orphaned, either literally or figuratively (parents always working, emotionally absent, etc.). How should we respond as a culture? As individuals?