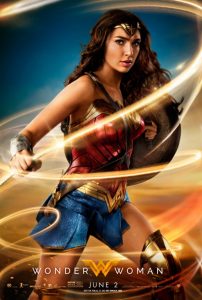 A Discussion Guide
Backstory: the Creation of Wonder Woman
Wonder Woman was originally the brainchild of Dr. William Moulon Marston (1893-1947), a Harvard educated psychologist, who over the course of his life was a lawyer, scientist, professor, and writer. He is generally credited with inventing the systolic blood pressure test and, as a related endeavor, the lie detector test. Marston’s ‘career in comics’ began in 1940, when he was hired as a consultant to All-American Comics (forerunner of DC Comics) to help stave off criticism about violence and sexual content in their publications.

While part of Marston’s overt strategy to deflect criticism was to create a female superhero, what remained covert and secret was the fact that Marston maintained a relationship with two women, each having two children to him, and all living together as one family; and that both women influenced Marston’s development of Wonder Woman, who in turn was something of a composite of Marston’s various theories (his philosophy of diametric opposites, his interest in bondage/submission themes and “sex love” training, and his being powerfully influenced by the suffrage, feminism and birth control movements of his day).

When Marston created Wonder Woman in 1941, he would draw inspiration from women he knew such as Emmeline Pankhurst, Margaret Sanger, Olive Byrne and Elizabeth Holloway Marston. And when he submitted a draft of his first script he explained the subtext of Wonder Woman by drawing upon Amazonian origins in ancient Greece as a means of chronicling “a great movement now under way—the growth in the power of women.”

A little later, in 1943 —and much more publically— Marston wrote: “Not even girls want to be girls so long as our feminine archetype lacks force, strength, and power. Not wanting to be girls, they don’t want to be tender, submissive, peace-loving as good women are. Women’s strong qualities have become despised because of their weakness. The obvious remedy is to create a feminine character with all the strength of Superman plus all the allure of a good and beautiful woman.” And even more pointedly, “Frankly, Wonder Woman is psychological propaganda for the new type of woman who, I believe, should rule the world.”

Trivia:
In the comics, Steve Trevor and Diana met in WWII (1939-45). In this film, they meet in WWI (1914-18), a change the filmmakers thought that more suitable as this period of time saw questions about women’s rights and about the changed nature of warfare. Additionally, the less clear line between good and evil that characterized WWI (as opposed to the Nazis of WWII) better serves the storyline.

A real life character, General Erich Ludendorff was supreme commander of the German forces in WWI and he did authorize the use of mustard gas, a corrosive agent that could, depending on the exposure, inflict temporary or permanent blindness, lasting damage to lungs and an extremely painful death.

Diana’s scenes in London are an homage to the first season of Wonder Woman (1975) and to Superman (1978). Touching the first, when Diana is introduced as Capt. Steve Trevor’s secretary in WWI, this is a play on her having been depicted as a clerical officer to U.S. Army Maj. Steve Trevor during WWII. And touching the second, Diana’s being dressed to fit into English society, this is a play on Superman’s entry into American urban life where he is disguised by way of ordinary clothes and by the addition of glasses (and where he stops a mugging attack and even has some trouble with a revolving door). Further, the glasses and remarks by Etta Candy in this film are an allusion to Diana wearing glasses in her civilian guise throughout the first season of Wonder Woman (1975).

Speaking of Etta Candy, she was actually part of the original Wonder Woman comic, serving as a faithful friend to Diana. Although unused by DC Comics for decades before being reintroduced as an important Wonder Woman character in 2006, in this film, she resembles her earliest, original version in appearance. (Currently, in the comics, Etta Candy is depicted as an African-American woman).

One of the film’s central pieces—”The No Man’s Land” sequence—initially caused confusion for some of the film’s creative team. Thinking of it as an action sequence, the concern related to how it could work without Diana fighting a villain. (Director Patty Jenkins insisted that the scene was a pivotal dramatic moment, underscoring Diana’s self-affirmation and her resolution).

1. Whether you have seen this previously or for the first time just now, what initial (immediate, visceral) impressions remain with you now? What specific lines of dialogue, visual settings or aspects of the soundtrack stand out to you?

2. Clearly Wonder Woman is the main character, but there are others around her who actually help us appreciate and better understand her identity, character and mission. Let’s think in terms of three ‘sets’ of supporting characters:

Growing up in Themyscira, Wonder Woman is most shaped by two Amazonian women, her mother (Queen Hippolyta) and her aunt and military leader (Antiope). What contributions do you see these two women making to the young and maturing Diana?

Entering the world beyond Themyscira—a world in which men are present and a world is at war—Wonder Woman encounters two additional women, one an amusing yet mettlesome secretary, the other a mad yet vulnerable scientist. What do we know about these two women? How do you see these women contributing to who we understand Wonder Woman to be and what she may be up against?

Turning now to consider the main male characters, how would you describe Steve Trevor and his ‘band of brothers’? What do we know about their character and conduct? Also, how many male villains are there in this film and what is it that makes them villainous? In general, how are males portrayed in this film and in what ways do they actually serve to ensure that it is Wonder Woman who retains our focus?

3. Not just characterization, but costuming and camera direction also serve to keep the viewing audience focused on Wonder Woman and her emergence as a bona fide superhero. What did you think of how Wonder Woman was dressed? In what ways did costume choice serve to enhance (or obscure) the story being told about Wonder Woman’s identity, character and mission? Were there particular sequences, special effects, or simple camera angles that likewise defined how you viewed and felt/thought about Wonder Woman?

4. Having taken a little time to think about the look and feel of the movie, and the chief characters in the movie, what would you identify as the theme or themes of this movie? What is this move actually about and what evidence might you offer to support this?

5. Thinking a little deeper…
a). Concerning ‘genre’ ~ One of the genres this Wonder Woman film fits is ‘origin story’ and in recent years we have been treated to many such stories. What is the purpose of an ‘origin story’? In what ways is this telling of Wonder Woman’s story similar to and/or different from the origin stories of other superheroes recently brought to the big screen?

b). Concerning ‘gender’ ~ Film critic, Justin Chang of The L.A.Times, notes that as a character, Wonder Woman was “equally inspired by the women’s suffrage movement, the pacifist movement and the pin up movement” and that “Wonder Woman herself has always been a weltering of contradictions—sculpted from clay and filled with the breathe of Zeus, but no less profoundly shaped by market imperatives and feminist influences.”

To your mind, what influences did you detect in director Patty Jenkin’s particular telling of this story? To what degree were you cognizant of this film being directed by a woman and being focused on a woman? How did this matter for you? To what degree was gender central to and/or peripheral to this Wonder Woman story? Is Diana a refreshing depiction of ‘femininity and powerful agency’ or is she ‘male-skewed’ (still the object of male desire/fantasy, just another version of a ‘Disney Princess,’ unnecessarily complicated and glibly ‘other’? What other female characters can you think of who epitomize what Wonder Women attempts to portray—an intelligent and motivated character with physical strength, personal allure and a strong moral compass?

Does it matter to you that Wonder Woman is a comic book character and that backstory is an unusual one—being rooted in the theories and experiences of her male creator? (See below for a summary of this backstory)

6. Overall: Did you enjoy this film? What will you take away from having viewed it? What are its abiding strengths? What are its weaknesses?