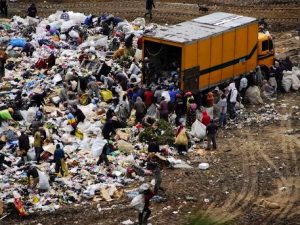 Driving through a section of Guatemala City for the five hundredth time, a strange tape played through my mind. Godzilla was trampling Tokyo, simultaneously oblivious and filled with fury, flinging harm on buildings, people and dreams. From the soon-to-be rubble, I ran toward the monster and hurled a rock, which bounced off its toe. The beast noticed neither me nor the stone, and the rampage continued. My little act of bravery had accomplished nothing.

And yet that deed had not been all pointless. It was meaningful to me as an act of resistance that had required some courage. And it had meant something to the few who had seen me do it. They drew from it some valor—enough, I guess, to think that they too might be able to put up a fight.

As I flew out of Guatemala City a few days later, considering the place’s cramped vastness, the metaphor came again to mind. The previous week had been filled with the usual frustration and blessedness time in Guatemala always brings. I had spent some of my university’s resources and, as usual, more of my own than I had planned. In the process, I had thought of something original: we bought 100 roses and gave them to the ladies living in a slum that is the ministry focus of a small church nearby. And we bought Christmas gifts for kids who otherwise would have none. We provided a meal of unusual richness for the people of the slum. And we hugged and said nice things in Jesus’ name. It was a full week.

But what real difference did it make? The rich meal was consumed and gone, the waste of which was deposited who-knows-where in a slum without plumbing. And the roses withered while drunken, violent men stole some of the courtesy we had tried to impart. And the new clothes were soon marked by the filth that traces everything in a community built on the edge of Central America’s biggest trash dump.

It’s no fun meeting Godzilla in the city. But I ask myself whether it’s better to throw a rock or run. The answer seems obvious.

Jesus said that if a person gives “even a cup of cold water to one of these little ones because he is my disciple…he will certainly not lose his reward” (Mt 10:42). A cup of water is a small thing. A single cup of water cannot quench thirst and, even if it did, the thirst would soon return. And what if the little ones came to rely on you for water, and you found yourself creating dependence even as you addressed an immediate need? Complications.

But we Christians have to do something, and most of the daily things we can do are small and have to be looked for.

You became a pastor because you wanted to take a congregation to the heights, but you find yourself bogged down in so much nonsense. But perhaps in the nonsense are decisions and words that can make a meaningful difference in someone’s life.

You became teacher because you love kids, but you find that the kids don’t love you. Still, you persist because you remember, or wish you had an occasion to remember, the fortifying recollection of an adult who persevered in something important.

When you married your prince, you never thought about the possibility of his snoring in your face at 3:00 a.m. And while losing sleep makes life difficult, the comedy of these night-time orations can spur tenderness.

Trash has collected somewhere in the neighborhood of houses and souls. There’s a parishioner who could use an encouraging note. Someone needs your prayers.