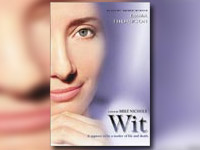 Vivian Bearing has formed her life around words and wit. Her devotion to the academic world of literary criticism reveals much about her intellectual capacity, but says little of her capacity for love.

She is a strong woman, a John Donne scholar, a college professor and a cancer patient who is dying. And you are invited to watch her do it. You are invited to watch a treatment that ravages every ounce of her ever-diminishing frame. Do you dare? Why would you? What, exactly, could there possibly be for you to learn?

The question is fair enough…and yet there is the inescapable reality that in watching this film, the viewer is being taught something of profound depth about living, dying and belonging. There are lessons here. What are they?

A Time to Grieve
I have been a part of many discussions about this film, and without fail I hear someone mention how they could not bear to watch this film because it would remind them too much of real personal loss. Perhaps you feel this grief yourself. This is a hard film to watch. Some reviews I read did a great disservice to this film by focusing primarily on the “entertainment value”—obviously giving it fairly low marks. Yet films like this are important. There is a profoundly bittersweet message about the dignity of life in Wit. In fact, one central message I found in this film was an insistence on the dignity of human life—not just in trying to preserve it, but also in letting life pass away.

Thinking about life and death is not for the faint of heart. There is an undercurrent of hope in this movie—and it comes through the kindness of strangers and long lost friends. It moves us to remember one of the ways we are made—needy. We need people in our lives because our lives are fragile. And this is one lesson Wit gives us.

Death be not proud, though some have called thee
Mighty and dreadful, for thou art not so,
For those whom thou think’st thou dost overthrow,
Die not, poor death, nor yet canst thou kill me.
From rest and sleep, which but thy pictures be,
Much pleasure, then from thee, much more must flow,
And soonest our best men with thee do go,
Rest of their bones, and soul’s delivery.
Thou art slave to Fate, Chance, kings, and desperate men,
And dost with poison, war, and sickness dwell,
And poppy, or charms can make us sleep as well,
And better than thy stroke; why swell’st thou then?
One short sleep past, we wake eternally,
And death shall be no more; death, thou shalt die.
by John Donne (1572-1631)

1. Did you like this film? Why or why not? 2. Has anyone seen or read the play this film was based on? Has anyone seen this film before? If so, did the film strike you differently the second time? How? Film as Art This film employs some cinematic features not common in most movies—like the way most of the story takes place in a cold sterile hospital room or how Vivian directly addresses the viewer. 3. How did these and other techniques serve to tell the story? 4. What was your evaluation of the following characters: Dr. Posner, Dr. Kelekian, Nurse Monahan and Vivian Bearing? Did any of them stand out to you more than the others? Why? 5. Were there any characters you identified with more than others? Who do you think you were meant to identify with? 6. All of these characters were a part of the film because they served a very specific purpose to the story—medical staff and patient. Were there any scenes or conversations you think really epitomized the true character of the people in this film (for instance, the “Cancer is Awesome” or “Popsicle” scenes)? Remedy and Malady Vivian says she is in the hospital due to her treatment, not the disease itself. A professor once told me that a remedy tells you a lot about the severity of a malady. If the ravaging nature of chemotherapy is considered worth the benefit it gives, then that speaks volumes about the disease of cancer itself. 7. What do we learn about cancer by watching this chemotherapy? 8. What can we learn from this when we consider the human condition in general? John Donne was a deeply religious man who wrote many of his poems and sermons while he believed he was dying from the plague. 9. Do you think Donne’s faith in a world to come affects the interpretation of his poem? Americans view thousands of deaths on TV and in film as they grow up. We get used to watching people die in movies. 10. Is Vivian’s death different from what you tend to see in most films? 11. Will this film affect how you think about on-screen death? If so, how? If not, why not? 12. What do you think is the main message being communicated through this story of suffering? A Matter of Life and Death Vivian, facing the greatest challenge of her life, attempts to employ her inner strength and wit to get her through the suffering (notice she never turned her TV on.) 13. What do you think she is trying to accomplish with her wit? Did her wit sustain her? 14. What do you think you would do in order to cope with intense suffering? One movie reviewer (Sasha Stone) said of Wit: “Vivian begins to understand something about life—that it doesn’t matter, in the end, how much you know. Knowledge can’t possibly comfort you in death.” 15. Do you agree with this assessment of the film? Why or why not? 16. Do you agree with this assessment in general about life? Why or why not? 17. What kinds of knowledge, if any, could bring comfort? A reviewer for CineScene said: “It is, perhaps, the ending that is the most beautiful. You never see it coming. And you just barely understand it. Vivian ends as she began—with a primal need for love.” 18. What “ending” is being referred to? 19. How did The Runaway Bunny scene make sense of this film as a whole? 20. Dr. Ashford calls it “a little allegory of the soul.” What does she mean by this? Do you agree or disagree? Why? 21. Might the film grant a window of insight into how to bring hope and comfort to someone who is about to die? In what ways?